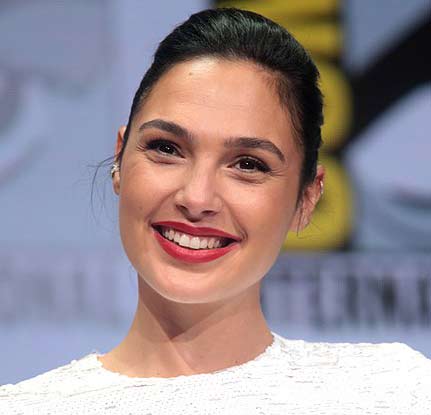 Gal Gadot (Hebrew: גל גדות‎, [ˈɡal ɡaˈdot]; born 30 April 1985) is an Israeli actress, model, and producer. At age 18, she was crowned Miss Israel 2004. She then served two years in the Israel Defense Forces as a fitness/combat readiness instructor, after which she began studying law and international relations at IDC Herzliya college while building her modeling and acting careers.

Gadot’s first international film role came as Gisele Yashar in Fast & Furious (2009), a role she reprised in subsequent installments of the film franchise. She went on to earn worldwide fame for portraying Wonder Woman in the DC Extended Universe, beginning with Batman v Superman: Dawn of Justice (2016), followed by the solo film Wonder Woman and the ensemble Justice League (both 2017). In 2018, Gadot was included on Time’s annual list of the 100 most influential people in the world, and she was listed among the highest-paid actresses in the world.

Gal Gadot was born in Petah Tikva, Israel, and raised in its neighboring city of Rosh HaAyin. In Hebrew, her first name means “wave” and her surname means “riverbanks”. Her parents are Irit (née Weiss), a teacher, and Michael Gadot, an engineer.Both her parents were born in Israel, and they Hebraized their surname from “Greenstein” to “Gadot” prior to her birth. Her father is a sixth-generation Sabra. Her maternal grandparents were born in Europe; her grandfather, who was imprisoned in the Auschwitz concentration camp, survived the Holocaust, and her grandmother left before the Nazi invasion. She has stated that she was brought up in a “very Jewish, Israeli family environment”. Gadot’s family is of Ashkenazi Jewish (Polish-Jewish, Austrian-Jewish, German-Jewish, and Czech-Jewish) descent. She has a younger sister, Dana.

Gadot completed her two mandatory years of service in the Israel Defense Forces, enlisted as a combat instructor. She began her service at age 20. Gadot says that her background helped her to win the role of Gisele in Fast & Furious: “I think the main reason was that the director Justin Lin really liked that I was in the military, and he wanted to use my knowledge of weapons.” After her military service, Gadot studied law and international relations at the IDC Herzliya college.

Gadot married Israeli real estate developer Yaron Varsano in 2008. They have two daughters, one born in 2011, and another in 2017.

Gadot and her husband owned a boutique hotel in Tel Aviv, which she helped to run. They sold their hotel to Roman Abramovich in 2015 for $26 million.