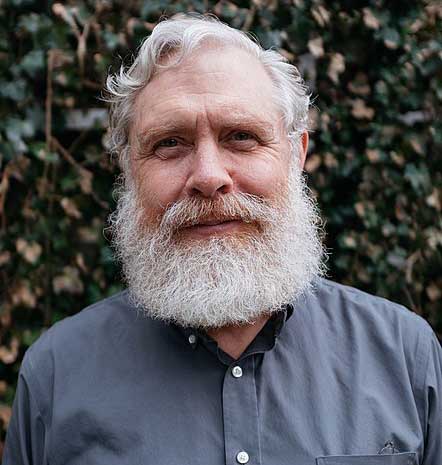 George Church (born 28 August 1954) is an American geneticist, molecular engineer, and chemist. He is the Robert Winthrop Professor of Genetics at Harvard Medical School, Professor of Health Sciences and Technology at Harvard and MIT, and a founding member of the Wyss Institute for Biologically Inspired Engineering. As of March 2017, Church serves as a member of the Bulletin of the Atomic Scientists’ Board of Sponsors.

George Church was born on 28 August 1954 on MacDill Air Force Base near Tampa, Florida, and grew up in nearby Clearwater; he attended high school at the preparatory boarding school Phillips Academy, in Andover, Massachusetts, from 1968 to 1972. He then studied at Duke University, completing a bachelor’s degree in zoology and chemistry in two years.

In the fall of 1973, Church began research work at Duke University with assistant professor of biochemistry Sung-Hou Kim, work that continued a year later with Church in a graduate biochemistry program at Duke on an NSF fellowship. As Peter Miller reported for the National Geographic series, “The Innovators”:

“As a graduate student at Duke… he used x-ray crystallography to study the three-dimensional structure of “transfer” RNA, which decodes DNA and carries instructions to other parts of the cell. It was groundbreaking research, but Church spent so much time in the lab—up to a hundred hours a week—that he neglected his other classes [in the fall of 1975]”.

As a result, Church was not compliant with Duke graduate academic policies, and was withdrawn from the degree program in January 1976. He was told that “[We] hope that whatever problems… contributed to your lack of success… at Duke will not keep you from a successful pursuit of a productive career.” The work gave rise to publications that include a Proceedings report with Church as lead author on an early model for molecular interactions between the minor groove of double-stranded DNA and β-ribbons of proteins.

Church returned to graduate work at Harvard University in 1977 under Walter Gilbert, and completed a PhD in biochemistry and molecular biology working on mobile genetic elements within introns of yeast mitochondrial and mouse Immunoglobulin genes (1984).

After completing his doctoral work, Church spent 6 months of 1984 at Biogen, the industrial laboratory site where Prof. Gilbert had relocated a sizable part of his former Harvard group; this was followed soon after by a Life Sciences Research Foundation postdoctoral fellowship at the University of California, San Francisco with Gail R. Martin,] a member of the National Academy of Sciences and joint-discoverer of a technique to extract mouse embryonic stem cells.

Church joined the Harvard Medical School faculty as an assistant professor in 1986. In his subsequent research career, Church is now the Robert Winthrop Professor of Genetics at Harvard Medical School, and a Member of the Harvard-MIT Health Sciences and Technology faculty, described as a “unique collaboration… integrat[ing] science, medicine and engineering to solve problems in human health” at the Institute for Medical Engineering and Science (IMES) at MIT. As well, he was a founding member of the Wyss Institute for Biologically Inspired Engineering at Harvard University. In these positions Church, as of May 2014, is reported to have co-authored more than 330 publications, 60 patents, and a popular science book.[better source needed]

Church has also served as director of the Center on Bioenergy Technology at Harvard, funded by a multiyear award from the U.S. Department of Energy.[when?][citation needed] and of the Center of Excellence in Genomic Science (CEGS) at Harvard, funded by a P50-type award from the National Human Genome Research Institute (NHGRI), a part of the National Institutes of Health.

George, along with a group of visionaries and scientists, including leaders from Harvard Medical School’s Personal Genome Project, co-founded Veritas Genetics and its European and Latinoamerican subsidiary, Veritas Intercontinental, with the idea of bringing the benefits of genomic data to millions of people globally.