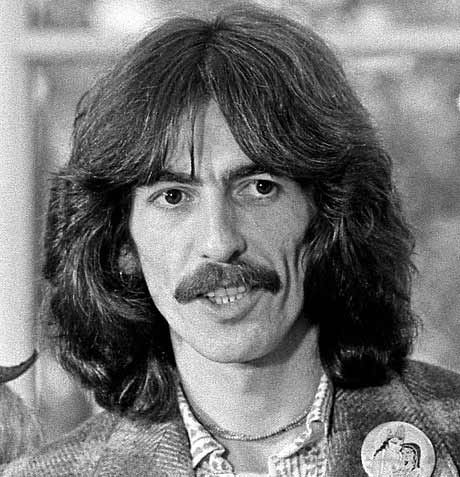 George Harrison MBE (25 February 1943 – 29 November 2001) was an English musician, singer, songwriter, and music and film producer who achieved international fame as the lead guitarist of the Beatles. Sometimes called “the quiet Beatle”, Harrison embraced Indian culture and helped broaden the scope of popular music through his incorporation of Indian instrumentation and Hindu-aligned spirituality in the Beatles’ work. Although the majority of the band’s songs were written by John Lennon and Paul McCartney, most Beatles albums from 1965 onwards contained at least two Harrison compositions. His songs for the group include “Taxman”, “Within You Without You”, “While My Guitar Gently Weeps”, “Here Comes the Sun” and “Something”.

Harrison’s earliest musical influences included George Formby and Django Reinhardt; Carl Perkins, Chet Atkins and Chuck Berry were subsequent influences. By 1965, he had begun to lead the Beatles into folk rock through his interest in Bob Dylan and the Byrds, and towards Indian classical music through his use of the sitar on “Norwegian Wood (This Bird Has Flown)”. Having initiated the band’s embracing of Transcendental Meditation in 1967, he subsequently developed an association with the Hare Krishna movement. After the band’s break-up in 1970, Harrison released the triple album All Things Must Pass, a critically acclaimed work that produced his most successful hit single, “My Sweet Lord”, and introduced his signature sound as a solo artist, the slide guitar. He also organised the 1971 Concert for Bangladesh with Indian musician Ravi Shankar, a precursor to later benefit concerts such as Live Aid. In his role as a music and film producer, Harrison produced acts signed to the Beatles’ Apple record label before founding Dark Horse Records in 1974 and co-founding HandMade Films in 1978.

Harrison released several best-selling singles and albums as a solo performer. In 1988, he co-founded the platinum-selling supergroup the Traveling Wilburys. A prolific recording artist, he was featured as a guest guitarist on tracks by Badfinger, Ronnie Wood and Billy Preston, and collaborated on songs and music with Dylan, Eric Clapton, Ringo Starr and Tom Petty, among others. Rolling Stone magazine ranked him number 11 in their list of the “100 Greatest Guitarists of All Time”. He is a two-time Rock and Roll Hall of Fame inductee – as a member of the Beatles in 1988, and posthumously for his solo career in 2004.

Harrison’s first marriage, to model Pattie Boyd in 1966, ended in divorce in 1977. The following year he married Olivia Arias, with whom he had a son, Dhani. Harrison died from lung cancer in 2001 at the age of 58, two years after surviving a knife attack by an intruder at his Friar Park home. His remains were cremated and the ashes were scattered according to Hindu tradition in a private ceremony in the Ganges and Yamuna rivers in India. He left an estate of almost £100 million.

According to Boyd, Harrison’s mother was particularly supportive: “All she wanted for her children is that they should be happy, and she recognized that nothing made George quite as happy as making music.” Louise was an enthusiastic music fan, and she was known among friends for her loud singing voice, which at times startled visitors by rattling the Harrisons’ windows. When Louise was pregnant with George, she often listened to the weekly broadcast Radio India. Harrison’s biographer Joshua Greene wrote, “Every Sunday she tuned in to mystical sounds evoked by sitars and tablas, hoping that the exotic music would bring peace and calm to the baby in the womb.”

Harrison lived the first four years of his life at 12 Arnold Grove, a terraced house on a cul-de-sac. The home had an outdoor toilet and its only heat came from a single coal fire. In 1949, the family was offered a council house and moved to 25 Upton Green, Speke. In 1948, at the age of five, Harrison enrolled at Dovedale Primary School. He passed the eleven-plus exam and attended Liverpool Institute High School for Boys from 1954 to 1959. Though the institute did offer a music course, Harrison was disappointed with the absence of guitars, and felt the school “moulded [students] into being frightened”.

Harrison’s earliest musical influences included George Formby, Cab Calloway, Django Reinhardt and Hoagy Carmichael; by the 1950s, Carl Perkins and Lonnie Donegan were significant influences. In early 1956, he had an epiphany: while riding his bicycle, he heard Elvis Presley’s “Heartbreak Hotel” playing from a nearby house, and the song piqued his interest in rock and roll. He often sat at the back of the class drawing guitars in his schoolbooks, and later commented, “I was totally into guitars.” Harrison cited Slim Whitman as another early influence: “The first person I ever saw playing a guitar was Slim Whitman, either a photo of him in a magazine or live on television. Guitars were definitely coming in.”

At first, Harold Harrison was apprehensive about his son’s interest in pursuing a music career. However, in 1956, he bought George a Dutch Egmond flat-top acoustic guitar, which according to Harold, cost £3.10 (equivalent to £100 in 2020). One of his father’s friends taught Harrison how to play “Whispering”, “Sweet Sue”, and “Dinah”. Inspired by Donegan’s music, Harrison formed a skiffle group, the Rebels, with his brother Peter and a friend, Arthur Kelly. On the bus to school, Harrison met Paul McCartney, who also attended the Liverpool Institute, and the pair bonded over their shared love of music.

Following the Anthology project, Harrison collaborated with Ravi Shankar on the latter’s Chants of India. Harrison’s final television appearance was a VH-1 special to promote the album, taped in May 1997. Soon afterwards, Harrison was diagnosed with throat cancer; he was treated with radiotherapy, which was thought at the time to be successful. He publicly blamed years of smoking for the illness.

In January 1998, Harrison attended Carl Perkins’ funeral in Jackson, Tennessee, where he performed a brief rendition of Perkins’ song “Your True Love”. In May, he represented the Beatles at London’s High Court in their successful bid to gain control of unauthorised recordings made of a 1962 performance by the band at the Star-Club in Hamburg. The following year, he was the most active of his former bandmates in promoting the reissue of their 1968 animated film Yellow Submarine.

On 30 December 1999, Harrison and his wife were attacked at their home, Friar Park. Michael Abram, a 34-year-old man suffering from paranoid schizophrenia, broke in and attacked Harrison with a kitchen knife, puncturing a lung and causing head injuries before Olivia Harrison incapacitated the assailant by striking him repeatedly with a fireplace poker and a lamp. Harrison later commented, “I felt exhausted and could feel the strength draining from me. I vividly remember a deliberate thrust to my chest. I could hear my lung exhaling and had blood in my mouth. I believed I had been fatally stabbed.” Following the attack, Harrison was hospitalised with more than 40 stab wounds, and part of his punctured lung was removed. He released a statement soon afterwards regarding his assailant: “He wasn’t a burglar, and he certainly wasn’t auditioning for the Traveling Wilburys. Adi Shankara, an Indian historical, spiritual and groovy-type person, once said, ‘Life is fragile like a raindrop on a lotus leaf.’ And you’d better believe it.”

In May 2001, it was revealed that Harrison had undergone an operation to remove a cancerous growth from one of his lungs, and in July, it was reported that he was being treated for a brain tumour at a clinic in Switzerland. While in Switzerland, Starr visited him but had to cut short his stay in order to travel to Boston, where his daughter was undergoing emergency brain surgery. Harrison, who was very weak, quipped: “Do you want me to come with you?” In November 2001, he began radiotherapy at Staten Island University Hospital in New York City for non-small cell lung cancer that had spread to his brain. When the news was made public, Harrison bemoaned his physician’s breach of privacy, and his estate later claimed damages. On 12 November in New York, Harrison, Starr and McCartney came together for the last time.

On 29 November 2001, Harrison died at Paul McCartney’s property on Heather Road in Beverly Hills, Los Angeles. He was 58 years old. He was cremated at Hollywood Forever Cemetery and his funeral was held at the Self-Realization Fellowship Lake Shrine in Pacific Palisades, California. His close family scattered his ashes according to Hindu tradition in a private ceremony in the Ganges and Yamuna rivers near Varanasi, India. He left almost £100 million in his will.

Harrison’s final album, Brainwashed (2002), was released posthumously after it was completed by his son Dhani and Jeff Lynne. A quotation from the Bhagavad Gita is included in the album’s liner notes: “There never was a time when you or I did not exist. Nor will there be any future when we shall cease to be.” A media-only single, “Stuck Inside a Cloud”, which Leng described as “a uniquely candid reaction to illness and mortality”, achieved number 27 on Billboard’s Adult Contemporary chart. The single “Any Road”, released in May 2003, peaked at number 37 on the UK Singles Chart. “Marwa Blues” went on to receive the 2004 Grammy Award for Best Pop Instrumental Performance, while “Any Road” was nominated for Best Male Pop Vocal Performance.

In June 1965, Harrison and the other Beatles were appointed Members of the Order of the British Empire (MBE). They received their insignia from the Queen at an investiture at Buckingham Palace on 26 October. In 1971 the Beatles received an Academy Award for the best Original Song Score for the film Let It Be. The minor planet 4149 Harrison, discovered in 1984, was named after him, as was a variety of Dahlia flower. In December 1992 he became the first recipient of the Billboard Century Award, an honour presented to music artists for significant bodies of work. The award recognised Harrison’s “critical role in laying the groundwork for the modern concept of world music” and for his having “advanced society’s comprehension of the spiritual and altruistic power of popular music”. Rolling Stone magazine ranked him number 11 in their list of the “100 Greatest Guitarists of All Time”. He is also in number 65 in the list of “100 greatest songwriters of all time” by the same magazine.

In 2002, on the first anniversary of his death, the Concert for George was held at the Royal Albert Hall. Eric Clapton organised the event, which included performances by many of Harrison’s friends and musical collaborators, including McCartney and Starr. Eric Idle, who described Harrison as “one of the few morally good people that rock and roll has produced”, was among the performers of Monty Python’s “Lumberjack Song”. The profits from the concert went to Harrison’s charity, the Material World Charitable Foundation.

In 2004, Harrison was posthumously inducted into the Rock and Roll Hall of Fame as a solo artist by his former bandmates Lynne and Petty, and into the Madison Square Garden Walk of Fame in 2006 for the Concert for Bangladesh. On 14 April 2009, the Hollywood Chamber of Commerce awarded Harrison a star on the Walk of Fame in front of the Capitol Records Building. McCartney, Lynne and Petty were present when the star was unveiled. Harrison’s widow Olivia, the actor Tom Hanks and Idle made speeches at the ceremony, and Harrison’s son Dhani spoke the Hare Krishna mantra.

Harrison was posthumously honoured with The Recording Academy’s Grammy Lifetime Achievement Award at the Grammy Awards in February 2015.