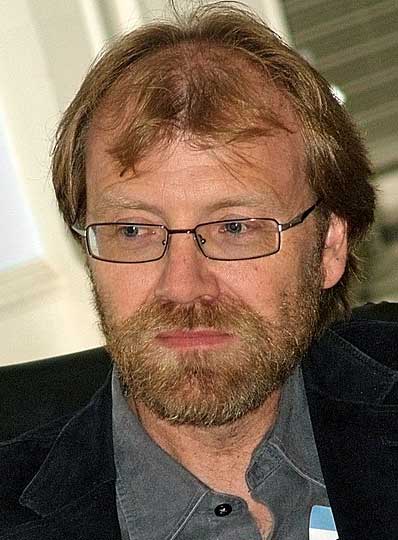 George Saunders (born December 2, 1958) is an American writer of short stories, essays, novellas, children’s books, and novels. His writing has appeared in The New Yorker, Harper’s, McSweeney’s, and GQ. He also contributed a weekly column, American Psyche, to the weekend magazine of The Guardian between 2006 and 2008.

A professor at Syracuse University, Saunders won the National Magazine Award for fiction in 1994, 1996, 2000, and 2004, and second prize in the O. Henry Awards in 1997. His first story collection, CivilWarLand in Bad Decline, was a finalist for the 1996 PEN/Hemingway Award. In 2006 Saunders received a MacArthur Fellowship. In 2006 he won the World Fantasy Award for his short story “CommComm”.

His story collection In Persuasion Nation was a finalist for the Story Prize in 2007. In 2013, he won the PEN/Malamud Award and was a finalist for the National Book Award. Saunders’s Tenth of December: Stories won the 2013 Story Prize for short-story collections and the inaugural (2014) Folio Prize. George Saunders’s novel Lincoln in the Bardo (Bloomsbury Publishing) won the 2017 Man Booker Prize.

Saunders was born in Amarillo, Texas. He grew up in Oak Forest, Illinois near Chicago, attended St. Damian Catholic School and graduated from Oak Forest High School in Oak Forest, Illinois. In 1981, he received a B.S. in geophysical engineering from Colorado School of Mines in Golden, Colorado. Of his scientific background, Saunders has said, “… any claim I might make to originality in my fiction is really just the result of this odd background: basically, just me working inefficiently, with flawed tools, in a mode I don’t have sufficient background to really understand. Like if you put a welder to designing dresses.”

In 1988, he was awarded an M.A. in creative writing from Syracuse University; while there, he met Paula Redick, a fellow writer, who would become his wife. Saunders recalled, “we [got] engaged in three weeks, a Syracuse Creative Writing Program record that, I believe, still stands.”

Regarding his influences, Saunders has written: