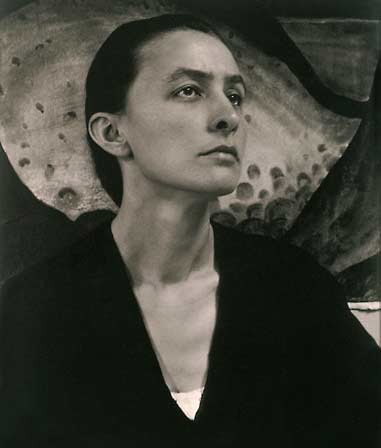 On view: The Art Institute of Chicago, The Museum of Modern Art, etc

Georgia Totto O’Keeffe (November 15, 1887 – March 6, 1986) was an American artist. She was known for her paintings of enlarged flowers, New York skyscrapers, and New Mexico landscapes. O’Keeffe has been recognized as the “Mother of American modernism”.

In 1905, O’Keeffe began her serious formal art training at the School of the Art Institute of Chicago and then the Art Students League of New York, but she felt constrained by her lessons that focused on recreating or copying what was in nature. In 1908, unable to fund further education, she worked for two years as a commercial illustrator, and then taught in Virginia, Texas, and South Carolina between 1911 and 1918. During that time, she studied art during the summers between 1912 and 1914 and was introduced to the principles and philosophies of Arthur Wesley Dow, who created works of art based upon personal style, design, and interpretation of subjects, rather than trying to copy or represent them. This caused a major change in the way she felt about and approached art, as seen in the beginning stages of her watercolors from her studies at the University of Virginia and more dramatically in the charcoal drawings that she produced in 1915 that led to total abstraction. Alfred Stieglitz, an art dealer and photographer, held an exhibit of her works in 1917. Over the next couple of years, she taught and continued her studies at the Teachers College, Columbia University in 1914 and 1915.

She moved to New York in 1918 at Stieglitz’s request and began working seriously as an artist. They developed a professional relationship and a personal relationship that led to their marriage in 1924. O’Keeffe created many forms of abstract art, including close-ups of flowers, such as the Red Canna paintings, that many found to represent female genitalia, although O’Keeffe consistently denied that intention. The reputation of the portrayal of women’s sexuality was also fueled by explicit and sensuous photographs that Stieglitz had taken and exhibited of O’Keeffe.

O’Keeffe and Stieglitz lived together in New York until 1929, when O’Keeffe began spending part of the year in the Southwest, which served as inspiration for her paintings of New Mexico landscapes and images of animal skulls, such as Cow’s Skull: Red, White, and Blue and Ram’s Head White Hollyhock and Little Hills. After Stieglitz’s death, she lived permanently in New Mexico at Georgia O’Keeffe Home and Studio in Abiquiú, until the last years of her life when she lived in Santa Fe. In 2014, O’Keeffe’s 1932 painting Jimson Weed sold for $44,405,000, more than three times the previous world auction record for any female artist. After her death, the Georgia O’Keeffe Museum was established in Santa Fe.

Georgia O’Keeffe was born on November 15, 1887, in a farmhouse located at 2405 Hwy T in the town of Sun Prairie, Wisconsin. Her parents, Francis Calyxtus O’Keeffe and Ida (Totto) O’Keeffe, were dairy farmers. Her father was of Irish descent. Her maternal grandfather George Victor Totto, for whom O’Keeffe was named, was a Hungarian count who came to the United States in 1848.

O’Keeffe was the second of seven children. She attended Town Hall School in Sun Prairie. By age 10, she had decided to become an artist, and with her sisters, Ida and Anita, she received art instruction from local watercolorist Sara Mann. O’Keeffe attended high school at Sacred Heart Academy in Madison, Wisconsin, as a boarder between 1901 and 1902. In late 1902, the O’Keeffes moved from Wisconsin to the close-knit neighborhood of Peacock Hill in Williamsburg, Virginia. The family apparently relocated to Virginia so O’Keeffe’s father could start a business making rusticated cast concrete block in anticipation of a demand for the block in the Peninsula building trade, but the demand never materialized. O’Keeffe stayed in Wisconsin with her aunt attending Madison Central High School until joining her family in Virginia in 1903. She completed high school as a boarder at Chatham Episcopal Institute in Virginia (now Chatham Hall), and graduated in 1905.

O’Keeffe taught and headed the art department at West Texas State Normal College, was a member of the Kappa Delta sorority, and watched over her youngest sibling, Claudia, at her mother’s request. In 1917, she visited her brother, Alexis, at a military camp in Texas before he shipped out for Europe during World War I. While there, she created the painting, The Flag, which expressed her anxiety and depression about the war.