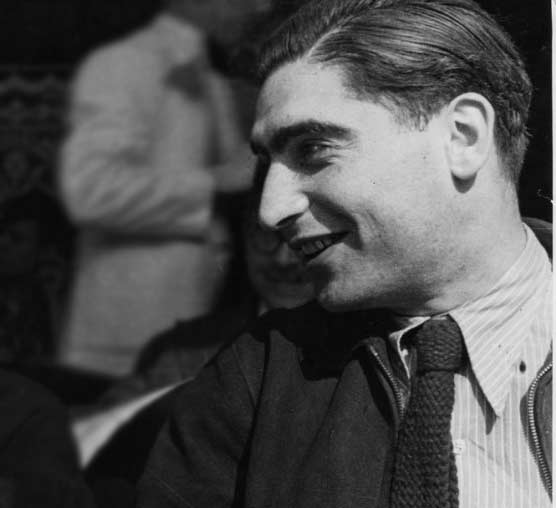 Gerta Pohorylle (1 August 1910 – 26 July 1937), known professionally as Gerda Taro, was a German Jewish war photographer active during the Spanish Civil War. She is regarded as the first woman photojournalist to have died while covering the frontline in a war.

Taro was the companion and professional partner of photographer Robert Capa. The name “Robert Capa” was originally an alias that Taro and Capa (born Endre Friedmann) shared, an invention meant to mitigate the increasing political intolerance in Europe and to attract the lucrative American market. A significant amount of what is credited as Robert Capa’s early work was actually made by Taro.

Pohorylle was born on 1 August 1910 in Stuttgart, Germany to Gisela Boral and Heinrich Pohorylle, a middle-class Jewish family that had recently emigrated from East Galicia. There she attended the Queen Charlotte High School (de) and later a business college, spending a year at a Lausanne boarding school in between.

In 1929, the family moved to Leipzig, just prior to the rise of Nazi Germany. Taro opposed the National Socialist German Workers Party (the name of the Nazi party in Germany) and became interested in Leftist politics. In 1933, following the Nazi party’s coming to power, she was arrested and detained for distributing propaganda against the National Socialists. Eventually, the entire Pohorylle household was forced to leave Germany toward different destinations. Taro, age 23, headed for Paris, while her parents attempted to reach mandatory Palestine (also known as Eretz Yisrael at that time by Jews seeking to reestablish a safe homeland). Her brothers went to England. She would not see her family again.

During her coverage of the Republican army retreat at the Battle of Brunete, Taro hopped onto the runningboard of General Walter’s car that was carrying wounded soldiers. A Republican tank crashed into its side and Taro suffered critical wounds, dying the following day, 26 July 1937.

The circumstances of Taro’s death have been questioned by British journalist Robin Stummer, writing in the New Statesman magazine. Stummer cited Willy Brandt, later Chancellor of West Germany, and a friend of Taro’s during the Spanish Civil War, saying that she had been the victim of the Stalinist purge of Communists and Socialists in Spain not aligned to Moscow. However, Stummer provided no other evidence for this claim.

In an interview with the Spanish daily El País, a nephew of a Republican soldier at the Battle of Brunete explained that she had died in an accident. According to the eye-witness account, she had been run over by a reversing tank and she died from her wounds in El Goloso English hospital a few hours later. The tank driver did not realize what he had done.

Due to her political commitment, Taro had become a respected anti-fascist figure. On 1 August 1937, on what would have been her 27th birthday, the French Communist Party gave her a grand funeral in Paris, drawing tens of thousands of people on to the streets, buried her at Père Lachaise Cemetery, and commissioned Alberto Giacometti to create a monument for her grave.

In early 2018, a photograph purported to be an image of Taro on her deathbed in the English war hospital was released by the son of Hungarian Dr. Kiszely who treated her.