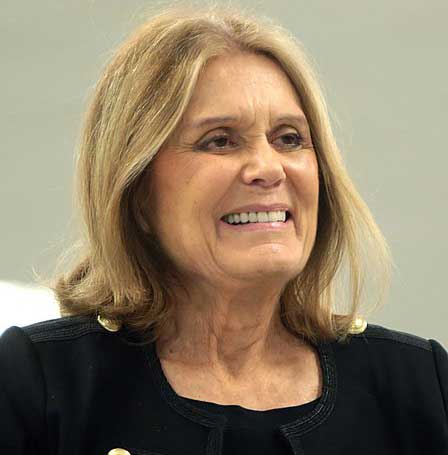 Occupation: Writer and journalist for Ms. and New York magazines

Gloria Marie Steinem (born March 25, 1934) is an American feminist, journalist, and social political activist who became nationally recognized as a leader and a spokeswoman for the American feminist movement in the late 1960s and early 1970s.

Steinem was a columnist for New York magazine, and a co-founder of Ms. magazine. In 1969, Steinem published an article, “After Black Power, Women’s Liberation”, which brought her to national fame as a feminist leader.

In 2005, Steinem, Jane Fonda, and Robin Morgan co-founded the Women’s Media Center, an organization that “works to make women visible and powerful in the media”.

As of May 2018, Steinem traveled internationally as an organizer and lecturer, and was a media spokeswoman on issues of equality.

Steinem was born on March 25, 1934, in Toledo, Ohio, the daughter of Ruth (née Nuneviller) and Leo Steinem. Her mother was Presbyterian, mostly of German (including Prussian) and some Scottish descent. Her father was Jewish, the son of immigrants from Württemberg, Germany, and Radziejów, Poland. Her paternal grandmother, Pauline Perlmutter Steinem, was chairwoman of the educational committee of the National Woman Suffrage Association, a delegate to the 1908 International Council of Women, and the first woman to be elected to the Toledo Board of Education, as well as a leader in the movement for vocational education. Pauline also rescued many members of her family from the Holocaust.

The Steinems lived and traveled about in a trailer, from which Leo carried out his trade as a roaming antiques dealer. Before Gloria was born, her mother, Ruth, then age 34, had a “nervous breakdown,” which left her an invalid, trapped in delusional fantasies that occasionally turned violent. She changed “from an energetic, fun-loving, book-loving” woman into “someone who was afraid to be alone, who could not hang on to reality long enough to hold a job, and who could rarely concentrate enough to read a book.” Ruth spent long periods in and out of sanatoriums for the mentally ill. Steinem was 10 years old when her parents finally separated in 1944. Her father went to California to find work, while she and her mother continued to live together in Toledo.

While her parents divorced under the stress of her mother’s illness, Steinem did not attribute it at all to male chauvinism on the father’s part — she claims to have “understood and never blamed him for the breakup.” Nevertheless, the impact of these events had a formative effect on her personality: while her father, a traveling salesman, had never provided much financial stability to the family, his exit aggravated their situation. Steinem concluded that her mother’s inability to hold on to a job was evidence of general hostility towards working women. She also concluded that the general apathy of doctors towards her mother emerged from a similar anti-woman animus. Years later, Steinem described her mother’s experience as pivotal to her understanding of social injustices. These perspectives convinced Steinem that women lacked social and political equality.

Steinem attended Waite High School in Toledo and Western High School in Washington, D.C., graduating from the latter while living with her older sister Susanne Steinem Patch. She then attended Smith College, an institution with which she continues to remain engaged, and from which she graduated as a member of Phi Beta Kappa.

In 1957, Steinem had an abortion. The procedure was performed by Dr. John Sharpe, a British physician, when abortion was still illegal. Years later, Steinem dedicated her memoir My Life on the Road (2015) to him. She wrote: “Dr. John Sharpe of London, who in 1957, a decade before physicians in England could legally perform an abortion for any reason other than the health of the woman, took the considerable risk of referring for an abortion a twenty-two-year-old American on her way to India. Knowing only that she had broken an engagement at home to seek an unknown fate, he said, ‘You must promise me two things. First, you will not tell anyone my name. Second, you will do what you want to do with your life.'”

In the late 1950s, Steinem spent two years in India as a Chester Bowles Asian Fellow, where she worked as a law clerk to Mehr Chand Mahajan, then Chief Justice of India. After returning to the United States, she served as director of the Independent Research Service, an organization funded in secret by a donor that turned out to be the CIA. She worked to send non-Communist American students to the 1959 World Youth Festival. In 1960, she was hired by Warren Publishing as the first employee of Help! magazine.

Steinem was diagnosed with breast cancer in 1986 and trigeminal neuralgia in 1994.
Steinem has no biological children.
On September 3, 2000, at age 66, Steinem married David Bale, father of actor Christian Bale. The wedding was performed at the home of her friend Wilma Mankiller, the first female Principal Chief of the Cherokee Nation. Steinem and Bale were married for only three years before he died of brain lymphoma on December 30, 2003, at age 62.

Previously, she had had a four-year relationship with the publisher Mortimer Zuckerman.

Commenting on ageing, Steinem says that as she approached 60 she felt like she entered a new phase in life that was free of the “demands of gender” that she faced from adolescence onward.