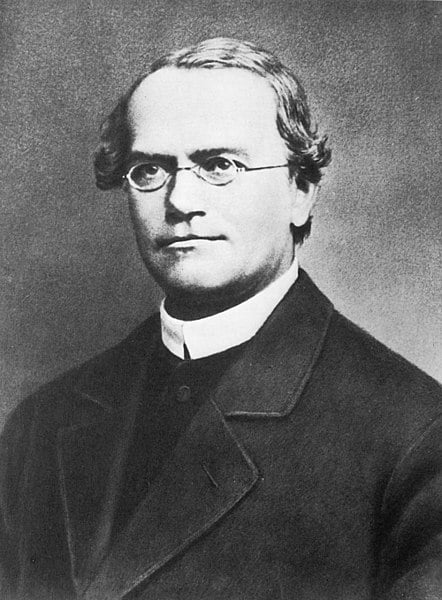 Known for: Creating the science of genetics

Gregor Johann Mendel (20 July 1822 – 6 January 1884) was a scientist, Augustinian friar and abbot of St. Thomas’ Abbey in Brno, Margraviate of Moravia. Mendel was born in a German-speaking family in the Silesian part of the Austrian Empire (today’s Czech Republic) and gained posthumous recognition as the founder of the modern science of genetics. Though farmers had known for millennia that crossbreeding of animals and plants could favor certain desirable traits, Mendel’s pea plant experiments conducted between 1856 and 1863 established many of the rules of heredity, now referred to as the laws of Mendelian inheritance.

Mendel worked with seven characteristics of pea plants: plant height, pod shape and color, seed shape and color, and flower position and color. Taking seed color as an example, Mendel showed that when a true-breeding yellow pea and a true-breeding green pea were cross-bred their offspring always produced yellow seeds. However, in the next generation, the green peas reappeared at a ratio of 1 green to 3 yellow. To explain this phenomenon, Mendel coined the terms “recessive” and “dominant” in reference to certain traits. In the preceding example, the green trait, which seems to have vanished in the first filial generation, is recessive and the yellow is dominant. He published his work in 1866, demonstrating the actions of invisible “factors”—now called genes—in predictably determining the traits of an organism.

The profound significance of Mendel’s work was not recognized until the turn of the 20th century (more than three decades later) with the rediscovery of his laws. Erich von Tschermak, Hugo de Vries, Carl Correns and William Jasper Spillman independently verified several of Mendel’s experimental findings, ushering in the modern age of genetics.

Mendel was born into a German-speaking family in Hynčice (Heinzendorf bei Odrau in German), at the Moravian-Silesian border, Austrian Empire (now a part of the Czech Republic). He was the son of Anton and Rosine (Schwirtlich) Mendel and had one older sister, Veronika, and one younger, Theresia. They lived and worked on a farm which had been owned by the Mendel family for at least 130 years (the house where Mendel was born is now a museum devoted to Mendel). During his childhood, Mendel worked as a gardener and studied beekeeping. As a young man, he attended gymnasium in Opava (called Troppau in German). He had to take four months off during his gymnasium studies due to illness. From 1840 to 1843, he studied practical and theoretical philosophy and physics at the Philosophical Institute of the University of Olomouc, taking another year off because of illness. He also struggled financially to pay for his studies, and Theresia gave him her dowry. Later he helped support her three sons, two of whom became doctors.

He became a monk in part because it enabled him to obtain an education without having to pay for it himself. As the son of a struggling farmer, the monastic life, in his words, spared him the “perpetual anxiety about a means of livelihood.”Born Johann Mendel, he was given the name Gregor (Řehoř in Czech) when he joined the Augustinian monks.

When Mendel entered the Faculty of Philosophy, the Department of Natural History and Agriculture was headed by Johann Karl Nestler who conducted extensive research of hereditary traits of plants and animals, especially sheep. Upon recommendation of his physics teacher Friedrich Franz, Mendel entered the Augustinian St Thomas’s Abbey in Brno (called Brünn in German) and began his training as a priest. Mendel worked as a substitute high school teacher. In 1850, he failed the oral part, the last of three parts, of his exams to become a certified high school teacher. In 1851, he was sent to the University of Vienna to study under the sponsorship of Abbot Cyril František Napp so that he could get more formal education. At Vienna, his professor of physics was Christian Doppler. Mendel returned to his abbey in 1853 as a teacher, principally of physics. In 1856, he took the exam to become a certified teacher and again failed the oral part. In 1867, he replaced Napp as abbot of the monastery.

After he was elevated as abbot in 1868, his scientific work largely ended, as Mendel became overburdened with administrative responsibilities, especially a dispute with the civil government over its attempt to impose special taxes on religious institutions. Mendel died on 6 January 1884, at the age of 61, in Brno, Moravia, Austria-Hungary (now Czech Republic), from chronic nephritis. Czech composer Leoš Janáček played the organ at his funeral. After his death, the succeeding abbot burned all papers in Mendel’s collection, to mark an end to the disputes over taxation.

In 1936, R.A. Fisher, a prominent statistician and population geneticist, reconstructed Mendel’s experiments, analyzed results from the F2 (second filial) generation and found the ratio of dominant to recessive phenotypes (e.g. green versus yellow peas; round versus wrinkled peas) to be implausibly and consistently too close to the expected ratio of 3 to 1. Fisher asserted that “the data of most, if not all, of the experiments have been falsified so as to agree closely with Mendel’s expectations,” Mendel’s alleged observations, according to Fisher, were “abominable”, “shocking”, and “cooked”.

Other scholars agree with Fisher that Mendel’s various observations come uncomfortably close to Mendel’s expectations. Anthony W.F. Edwards, for instance, remarks: “One can applaud the lucky gambler; but when he is lucky again tomorrow, and the next day, and the following day, one is entitled to become a little suspicious”. Three other lines of evidence likewise lend support to the assertion that Mendel’s results are indeed too good to be true.

Fisher’s analysis gave rise to the Mendelian paradox, a paradox that remains unsolved to this very day. Thus, on the one hand, Mendel’s reported data are, statistically speaking, too good to be true; on the other, “everything we know about Mendel suggests that he was unlikely to engage in either deliberate fraud or in unconscious adjustment of his observations.” A number of writers have attempted to resolve this paradox.

One attempted explanation invokes confirmation bias. Fisher accused Mendel’s experiments as “biased strongly in the direction of agreement with expectation … to give the theory the benefit of doubt”. This might arise if he detected an approximate 3 to 1 ratio early in his experiments with a small sample size, and, in cases where the ratio appeared to deviate slightly from this, continued collecting more data until the results conformed more nearly to an exact ratio.

In his 2004 article, J.W. Porteous concluded that Mendel’s observations were indeed implausible. However, reproduction of the experiments has demonstrated that there is no real bias towards Mendel’s data.

Another attempt to resolve the Mendelian paradox notes that a conflict may sometimes arise between the moral imperative of a bias-free recounting of one’s factual observations and the even more important imperative of advancing scientific knowledge. Mendel might have felt compelled “to simplify his data in order to meet real, or feared, editorial objections.” Such an action could be justified on moral grounds (and hence provide a resolution to the Mendelian paradox), since the alternative—refusing to comply—might have retarded the growth of scientific knowledge. Similarly, like so many other obscure innovators of science, Mendel, a little known innovator of working-class background, had to “break through the cognitive paradigms and social prejudices of his audience. If such a breakthrough “could be best achieved by deliberately omitting some observations from his report and adjusting others to make them more palatable to his audience, such actions could be justified on moral grounds.”

Daniel L. Hartl and Daniel J. Fairbanks reject outright Fisher’s statistical argument, suggesting that Fisher incorrectly interpreted Mendel’s experiments. They find it likely that Mendel scored more than 10 progeny, and that the results matched the expectation. They conclude: “Fisher’s allegation of deliberate falsification can finally be put to rest, because on closer analysis it has proved to be unsupported by convincing evidence.” In 2008 Hartl and Fairbanks (with Allan Franklin and AWF Edwards) wrote a comprehensive book in which they concluded that there were no reasons to assert Mendel fabricated his results, nor that Fisher deliberately tried to diminish Mendel’s legacy. Reassessment of Fisher’s statistical analysis, according to these authors, also disproves the notion of confirmation bias in Mendel’s results.