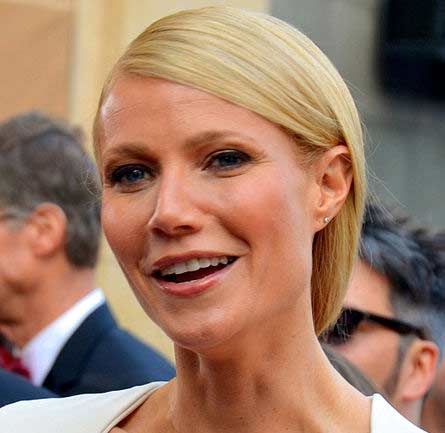 Gwyneth Kate Paltrow born September 27, 1972 is an American actress, singer, author, and businesswoman. She has received numerous accolades for her work, including an Academy Award, a Golden Globe Award, and a Primetime Emmy Award.

Paltrow gained very early notice for her work in films such as Seven (1995), Emma (1996), Sliding Doors (1998), and A Perfect Murder (1998). She garnered wider critical acclaim for her performance as Viola de Lesseps in the historical romance film Shakespeare in Love (1998) which won her several awards, including the Academy Award for Best Actress. This was followed by roles in The Talented Mr. Ripley (1999), The Royal Tenenbaums (2001), Shallow Hal (2001), and Sky Captain and the World of Tomorrow (2004).

After becoming a mother, Paltrow significantly reduced her film workload, making occasional appearances in films, such as Proof (2005), for which she earned a nomination for the Golden Globe Award for Best Actress in a Motion Picture – Drama. In 2009, Paltrow received a Grammy Award nomination for Best Spoken Word Album for Children for the children’s audiobook Brown Bear and Friends and won the Primetime Emmy Award for Outstanding Guest Actress in a Comedy Series for her guest role as Holly Holliday on the Fox musical comedy-drama television series Glee in 2011. From 2008 to 2019, Paltrow portrayed Pepper Potts in the Marvel Cinematic Universe.

Since 1995, Paltrow has been the face of Estée Lauder’s Pleasures perfume. She is also the face of American fashion brand Coach, owner of a lifestyle company, Goop, and author of several cookbooks. Paltrow has received severe criticism from the scientific community and medical professionals for promoting unproven treatments based on pseudoscience through her company Goop.

Gwyneth Kate Paltrow was born on September 27, 1972 in Los Angeles, the daughter of actress Blythe Danner and film producer-director Bruce Paltrow. She has a younger brother, Jake, who is a director and screenwriter. Paltrow’s father was Jewish, while her mother is from a Christian background. She was raised celebrating “both Jewish and Christian holidays.” Her brother had a traditional bar mitzvah when he turned 13. Her father’s Ashkenazi Jewish family emigrated from Belarus and Poland, while her mother has Pennsylvania Dutch (German), and some Irish and English, ancestry. Paltrow’s paternal great-great-grandfather was a rabbi in Nowogród, Poland, and a descendant of the well-known Paltrowicz family of rabbis from Kraków. She is a half-cousin of actress Katherine Moennig, through her mother, and a second cousin of former U.S. Congresswoman Gabby Giffords (AZ-08), through her father. Her godfather is director Steven Spielberg. Her uncle is opera singer and actor Harry Danner, whose daughter, actress Hillary Danner, is Paltrow’s cousin and close friend. Paltrow recalls their family gatherings: “Hillary and I always had this in common, and do to this day cooking for people we love, eating, hanging out as a family. It’s how we were raised. It’s what we do.” Another cousin is Rebekah Paltrow Neumann, whose spouse is the Israeli-American millionaire Adam Neumann, founder of WeWork.

Paltrow was raised in Santa Monica, California, where she attended Crossroads School, before enrolling in the Spence School, a private girls’ school in New York City. Later, she briefly studied anthropology at the University of California, Santa Barbara, before dropping out to act. She is an “adopted daughter” of Talavera de la Reina (Spain), where at 15, she spent a year as an exchange student and learned to speak Spanish. She is also conversant in French.

At the age of 24, Paltrow was engaged to actor Brad Pitt, whom she dated from 1994 to 1997. They called off the engagement, according to Paltrow, because she was not ready for marriage. Paltrow has since said that, as this was her first high-profile relationship with another celebrity, it taught her the need for public discretion about her romantic life.

Paltrow had an on-and-off three-year relationship with actor Ben Affleck from 1997 to late 2000. They first broke up in early 1999; soon afterward, Paltrow persuaded Affleck to star in the film Bounce with her. During the making of the film, the couple started dating again and eventually broke up in October 2000.

In October 2002, Paltrow met Chris Martin of the British band Coldplay backstage three weeks after the death of her father, Bruce Paltrow. They married in December 2003 in a ceremony at a hotel in Southern California. Paltrow was pregnant with Martin’s child at the time of their wedding. Paltrow and Martin have two children together: daughter Apple, born in May 2004, and a son Moses, born in April 2006. Moses’ name was inspired by a song Chris Martin wrote for Paltrow. Simon Pegg and Martin’s bandmate Jonny Buckland are Apple’s godfathers.

Paltrow cut down on work after becoming a mother. She also suffered from postpartum depression after the 2006 birth of her son. In March 2014, Paltrow announced that she and Martin had separated after ten years of marriage, describing the process as “conscious uncoupling.” In her official announcement, Paltrow had her doctor, Dr. Habib Sadeghi, and his dentist wife, Dr. Sherry Sami, explain Conscious Uncoupling. A “conscious uncoupling is the ability to understand that every irritation and argument [within a marriage] was a signal to look inside ourselves and identify a negative internal object that needed healing,” Sadeghi explained. “From this perspective, there are no bad guys, just two people, it’s about people as individuals, not just the relationship”.

In 2014, Paltrow began dating producer Brad Falchuk, whom she met on the set of Glee in 2010. The couple went public with their relationship in April 2015. They announced their engagement on January 8, 2018 and the following July, that they would have a “private and small” wedding. The marriage ceremony was held in September 2018 in The Hamptons on Long Island, New York. Falchuk had been married since 1994 to Suzanne Bukinik Falchuk, who filed for divorce in 2013.

In 2004, Paltrow practiced cupping therapy, attending a film premiere with bruises on her back. As of 2013, Paltrow practices Transcendental Meditation. While Paltrow had previously smoked one cigarette a week, as of 2018 she had cut down.

In 2017, Paltrow said that during the filming of the 1996 movie Emma, producer Harvey Weinstein made unwanted sexual advances toward her. She confided in her ex-fiancé Brad Pitt, who confronted Weinstein at an industry event. Weinstein later warned Paltrow not to tell anyone else. In 2017, Paltrow was a major source for an article written by New York Times investigative journalists Jodi Kantor and Megan Twohey about Weinstein’s alleged sexual misconduct.

In January 2019, retired optometrist Terry Sanderson sued Paltrow for $3.1 million, claiming that three years earlier she collided with him on a ski slope at Deer Valley Resort in Park City, Utah, causing him permanent traumatic brain injury. Paltrow counter-sued Sanderson in February, claiming that he was the one who crashed into her. She sought a symbolic $1 in damages, as well as repayment of her legal fees.