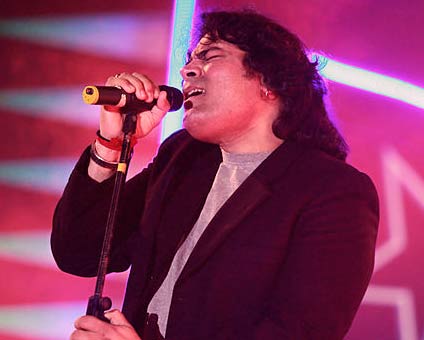 Shafqat Amanat Ali Khan (Urdu: شفقت امانت علی خان ‎), (born 26 February 1965) is a Pakistani classical singer belonging to Patiala Gharana lineage. He was the lead vocalist of the Pakistani rock band Fuzön until 2006. He was awarded the President’s Pride of Performance civil award on 23 March 2008.

“Aankhon Ke Saagar,” “Khamaj,” “Ankhiyan” and “Mitwa” are some of his most popular works. He also sang the songs “Phir Wohi Raastey” and “Allah Megh De” for a Pakistani film named Ramchand Pakistani.

Shafqat was introduced to Bollywood by Shankar Mahadevan. One morning while driving to his studio, he heard Shafqat’s hit song “Aankhon Ke Saagar” on the radio. He immediately called the radio jockey who was his friend and got Shafqat’s contact number. Shafqat sang “Mitwa” composed by Shankar Ehsaan Loy for the movie Kabhi Alvida Naa Kehna. The song was listed in the top charts in India, helping propel Shafqat into stardom. He was the voice behind the critically acclaimed song “Yeh Honsla” [sic] in the Bollywood film Dor. He sang background for the films Hello and Mumbai Cutting. His songs “Mora Saiyaan” and “Tere Bina” were featured in Nagesh Kukunoor’s Hyderabad Blues 2.

After leaving the band Fuzon in 2006, Shafqat concentrated on his solo career. Based on folk and Sufi works, the album Tabeer was commissioned and released by Music Today in mid-September 2008.

The first video of the premier song of the album, “Khairheyan De Naal”, was aired on all channels in India and Pakistan. He has fondly been nicknamed the “Rock star Ustad” by Saleem Merchant of the Saleem-Suleman duo. He also appeared on the Rubaroo episode of Indian Idol 4. He released his second solo album Kyun Dooriyan in 2010. It included a couple of songs — “Kaga Ja” and “Naal Naal” — which he had written during his time with Fuzon.