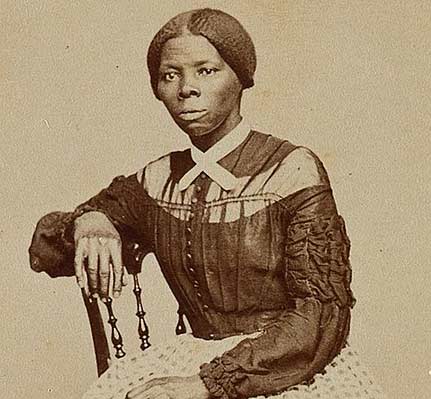 Harriet Tubman (born Araminta Ross, c. March 1822 – March 10, 1913) was an American abolitionist and political activist. Born into slavery, Tubman escaped and subsequently made some 13 missions to rescue approximately 70 enslaved people, including family and friends, using the network of antislavery activists and safe houses known as the Underground Railroad. During the American Civil War, she served as an armed scout and spy for the Union Army. In her later years, Tubman was an activist in the movement for women’s suffrage.

Born enslaved in Dorchester County, Maryland, Tubman was beaten and whipped by her various masters as a child. Early in life, she suffered a traumatic head wound when an irate overseer threw a heavy metal weight intending to hit another enslaved person, but hit her instead. The injury caused dizziness, pain, and spells of hypersomnia, which occurred throughout her life. After her injury, Tubman began experiencing strange visions and vivid dreams, which she ascribed to premonitions from God. These experiences, combined with her Methodist upbringing, led her to become devoutly religious.

In 1849, Tubman escaped to Philadelphia, only to return to Maryland to rescue her family soon after. Slowly, one group at a time, she brought relatives with her out of the state, and eventually guided dozens of other enslaved people to freedom. Traveling by night and in extreme secrecy, Tubman (or “Moses”, as she was called) “never lost a passenger”. After the Fugitive Slave Act of 1850 was passed, she helped guide fugitives farther north into British North America (Canada), and helped newly freed enslaved people to find work. Tubman met John Brown in 1858, and helped him plan and recruit supporters for his 1859 raid on Harpers Ferry.

When the Civil War began, Tubman worked for the Union Army, first as a cook and nurse, and then as an armed scout and spy. The first woman to lead an armed expedition in the war, she guided the raid at Combahee Ferry, which liberated more than 700 enslaved people. After the war, she retired to the family home on property she had purchased in 1859 in Auburn, New York, where she cared for her aging parents. She was active in the women’s suffrage movement until illness overtook her, and she had to be admitted to a home for elderly African Americans that she had helped to establish years earlier. After her death in 1913, she became an icon of courage and freedom.

Tubman was born Araminta “Minty” Ross to enslaved parents, Harriet (“Rit”) Green and Ben Ross. Rit was owned by Mary Pattison Brodess (and later her son Edward). Ben was held by Anthony Thompson, who became Mary Brodess’s second husband, and who ran a large plantation near the Blackwater River in the Madison area of Dorchester County, Maryland. As with many enslaved people in the United States, neither the exact year nor place of Tubman’s birth is known, and historians differ as to the best estimate. Kate Larson records the year as 1822, based on a midwife payment and several other historical documents, including her runaway advertisement, while Jean Humez says “the best current evidence suggests that Tubman was born in 1820, but it might have been a year or two later”. Catherine Clinton notes that Tubman reported the year of her birth as 1825, while her death certificate lists 1815 and her gravestone lists 1820.

Modesty, Tubman’s maternal grandmother, arrived in the United States on a slave ship from Africa; no information is available about her other ancestors. As a child, Tubman was told that she seemed like an Ashanti person because of her character traits, though no evidence has been found to confirm or deny this lineage. Her mother, Rit (who may have had a white father), was a cook for the Brodess family. Her father, Ben, was a skilled woodsman who managed the timber work on Thompson’s plantation. They married around 1808 and, according to court records, had nine children together: Linah, Mariah Ritty, Soph, Robert, Minty (Harriet), Ben, Rachel, Henry, and Moses.

Rit struggled to keep her family together as slavery threatened to tear it apart. Edward Brodess sold three of her daughters (Linah, Mariah Ritty, and Soph), separating them from the family forever. When a trader from Georgia approached Brodess about buying Rit’s youngest son, Moses, she hid him for a month, aided by other enslaved people and freedmen in the community. At one point she confronted her owner about the sale. Finally, Brodess and “the Georgia man” came toward the slave quarters to seize the child, where Rit told them, “You are after my son; but the first man that comes into my house, I will split his head open.” Brodess backed away and abandoned the sale. Tubman’s biographers agree that stories told about this event within the family influenced her belief in the possibilities of resistance.

Anthony Thompson promised to manumit Tubman’s father at the age of 45. After Thompson died, his son followed through with that promise in 1840. Tubman’s father continued working as a timber estimator and foreman for the Thompson family. Several years later, Tubman contacted a white attorney and paid him five dollars to investigate her mother’s legal status. The lawyer discovered that a former owner had issued instructions that Tubman’s mother, Rit, like her husband, would be manumitted at the age of 45. The record showed that a similar provision would apply to Rit’s children, and that any children born after she reached 45 years of age were legally free, but the Pattison and Brodess families ignored this stipulation when they inherited the enslaved people. Challenging it legally was an impossible task for Tubman.

Around 1844, she married a free Black man named John Tubman. Although little is known about him or their time together, the union was complicated because of her slave status. The mother’s status dictated that of children, and any children born to Harriet and John would be enslaved. Such blended marriages – free people of color marrying enslaved people – were not uncommon on the Eastern Shore of Maryland, where by this time, half the Black population was free. Most African-American families had both free and enslaved members. Larson suggests that they might have planned to buy Tubman’s freedom.

Tubman changed her name from Araminta to Harriet soon after her marriage, though the exact timing is unclear. Larson suggests this happened right after the wedding, and Clinton suggests that it coincided with Tubman’s plans to escape from slavery. She adopted her mother’s name, possibly as part of a religious conversion, or to honor another relative.

Despite her years of service, Tubman never received a regular salary and was for years denied compensation. Her unofficial status and the unequal payments offered to black soldiers caused great difficulty in documenting her service, and the U.S. government was slow in recognizing its debt to her. Her constant humanitarian work for her family and former slaves, meanwhile, kept her in a state of constant poverty, and her difficulties in obtaining a government pension were especially difficult for her.

Tubman spent her remaining years in Auburn, tending to her family and other people in need. She worked various jobs to support her elderly parents, and took in boarders to help pay the bills. One of the people Tubman took in was a 5-foot-11-inch-tall (180 cm) farmer named Nelson Charles Davis. Born in North Carolina, he had served as a private in the 8th United States Colored Infantry Regiment from September 1863 to November 1865. He began working in Auburn as a bricklayer, and they soon fell in love. Though he was 22 years younger than she was, on March 18, 1869 they were married at the Central Presbyterian Church. They adopted a baby girl named Gertie in 1874, and lived together as a family; Nelson died on October 14, 1888 of tuberculosis.

Tubman’s friends and supporters from the days of abolition, meanwhile, raised funds to support her. One admirer, Sarah Hopkins Bradford, wrote an authorized biography entitled Scenes in the Life of Harriet Tubman. The 132-page volume was published in 1869 and brought Tubman some $1,200 in income. Criticized by modern biographers for its artistic license and highly subjective point of view, the book nevertheless remains an important source of information and perspective on Tubman’s life. In 1886 Bradford released a re-written volume, also intended to help alleviate Tubman’s poverty, called Harriet, the Moses of her People. In both volumes Harriet Tubman is hailed as a latter-day Joan of Arc.

Tubman in 1887 (far left), with her husband Davis (seated, with cane), their adopted daughter Gertie (beside Tubman), Lee Cheney, John “Pop” Alexander, Walter Green, “Blind Aunty” Sarah Parker, and her great-niece Dora Stewart at Tubman’s home in Auburn, New York
Facing accumulated debts (including payments for her property in Auburn), Tubman fell prey in 1873 to a swindle involving gold transfer. Two men, one named Stevenson and the other John Thomas, claimed to have in their possession a cache of gold smuggled out of South Carolina. They offered this treasure – worth about $5,000, they claimed – for $2,000 in cash. They insisted that they knew a relative of Tubman’s, and she took them into her home, where they stayed for several days. She knew that white people in the South had buried valuables when Union forces threatened the region, and also that black men were frequently assigned to digging duties. Thus the situation seemed plausible, and a combination of her financial woes and her good nature led her to go along with the plan. She borrowed the money from a wealthy friend named Anthony Shimer and arranged to receive the gold late one night. Once the men had lured her into the woods, however, they attacked her and knocked her out with chloroform, then stole her purse and bound and gagged her. When she was found by her family, she was dazed and injured, and the money was gone.

The first modern biography of Tubman to be published after Sarah Hopkins Bradford’s 1869 and 1886 books was Earl Conrad’s Harriet Tubman (1943). Conrad had experienced great difficulty in finding a publisher – the search took four years – and endured disdain and contempt for his efforts to construct a more objective, detailed account of Tubman’s life for adults. Several highly dramatized versions of Tubman’s life had been written for children, and many more came later, but Conrad wrote in an academic style to document the historical importance of her work for scholars and the nation’s collective memory. The book was finally published by Carter G. Woodson’s Associated Publishers in 1943. Though she was a popular significant historical figure, another Tubman biography for adults did not appear for 60 years, when Jean Humez published a close reading of Tubman’s life stories in 2003. Larson and Clinton both published their biographies soon after in 2004. Author Milton C. Sernett discusses all the major biographies of Tubman in his 2007 book Harriet Tubman: Myth, Memory, and History.