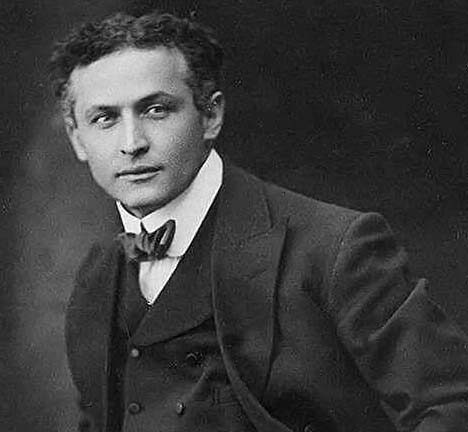 Harry Houdini (March 24, 1874 – October 31, 1926) was a Hungarian-born American illusionist and stunt performer, noted for his sensational escape acts. He first attracted notice in vaudeville in the US and then as “Harry ‘Handcuff’ Houdini” on a tour of Europe, where he challenged police forces to keep him locked up. Soon he extended his repertoire to include chains, ropes slung from skyscrapers, straitjackets under water, and having to escape from and hold his breath inside a sealed milk can with water in it.

In 1904, thousands watched as he tried to escape from special handcuffs commissioned by London’s Daily Mirror, keeping them in suspense for an hour. Another stunt saw him buried alive and only just able to claw himself to the surface, emerging in a state of near-breakdown. While many suspected that these escapes were faked, Houdini presented himself as the scourge of fake spiritualists. As President of the Society of American Magicians, he was keen to uphold professional standards and expose fraudulent artists. He was also quick to sue anyone who imitated his escape stunts.

Houdini made several movies but quit acting when it failed to bring in money. He was also a keen aviator and aimed to become the first man to fly a plane in Australia.

Weisz arrived in the United States on July 3, 1878, on the SS Fresia with his mother (who was pregnant) and his four brothers. The family changed their name to the German spelling Weiss, and Erik became Ehrich. The family lived in Appleton, Wisconsin, where his father served as Rabbi of the Zion Reform Jewish Congregation.

According to the 1880 census, the family lived on Appleton Street in an area that is now known as Houdini Square.[8] On June 6, 1882, Rabbi Weiss became an American citizen. Losing his job at Zion in 1882, Rabbi Weiss and family moved to Milwaukee and fell into dire poverty.[9] In 1887, Rabbi Weiss moved with Ehrich to New York City, where they lived in a boarding house on East 79th Street. He was joined by the rest of the family once Rabbi Weiss found permanent housing. As a child, Ehrich Weiss took several jobs, making his public début as a 9-year-old trapeze artist, calling himself “Ehrich, the Prince of the Air”. He was also a champion cross country runner in his youth.

Houdini and his wife Bess

Houdini became an active Freemason and was a member of St. Cecile Lodge No. 568 in New York City.

In 1904, Houdini bought a New York City townhouse at 278 West 113th Street in Harlem. He paid US$25,000 for the five-level, 6,008-square-foot house, which was built in 1895, and lived in it with his wife Bess, and various other relatives until his death in 1926. In March 2018, it was purchased for $3.6 million. A plaque affixed to the building by the Historical Landmark Preservation Center reads, “The magician lived here from 1904 to 1926 collecting illusions, theatrical memorabilia, and books on psychic phenomena and magic.”

In 1918, he registered for selective service as Harry Handcuff Houdini.

Harry Houdini died of peritonitis, secondary to a ruptured appendix, at 1:26 p.m. on October 31, 1926, in Room 401 at Detroit’s Grace Hospital, aged 52. In his final days, he believed that he would recover, but his last words before dying were reportedly, “I’m tired of fighting… I do not want to fight anymore…”

Witnesses to an incident at Houdini’s dressing room in the Princess Theatre in Montreal speculated that Houdini’s death was caused by a McGill University student, Jocelyn Gordon Whitehead (b. 1895 – d. 1954), who repeatedly struck Houdini’s abdomen.

The accounts of the witnesses, students named Jacques Price and Sam Smilovitz (sometimes called Jack Price and Sam Smiley), generally corroborated one another. Price said that Whitehead asked Houdini “if he believed in the miracles of the Bible” and “whether it was true that punches in the stomach did not hurt him”. Houdini offered a casual reply that his stomach could endure a lot. Whitehead then delivered “some very hammer-like blows below the belt”. Houdini was reclining on a couch at the time, having broken his ankle while performing several days earlier. Price said that Houdini winced at each blow and stopped Whitehead suddenly in the midst of a punch, gesturing that he had had enough, and adding that he had had no opportunity to prepare himself against the blows, as he did not expect Whitehead to strike him so suddenly and forcefully. Had his ankle not been broken, he would have risen from the couch into a better position to brace himself.

Throughout the evening, Houdini performed in great pain. He was unable to sleep and remained in constant pain for the next two days, but did not seek medical help. When he finally saw a doctor, he was found to have a fever of 102 °F (39 °C) and acute appendicitis, and was advised to have immediate surgery. He ignored the advice and decided to go on with the show. When Houdini arrived at the Garrick Theater in Detroit, Michigan, on October 24, 1926, for what would be his last performance, he had a fever of 104 °F (40 °C). Despite the diagnosis, Houdini took the stage. He was reported to have passed out during the show, but was revived and continued. Afterwards, he was hospitalized at Detroit’s Grace Hospital.

It is unclear whether the dressing room incident caused Houdini’s eventual death, as the relationship between blunt trauma and appendicitis is uncertain. One theory suggests that Houdini was unaware that he was suffering from appendicitis, and might have been aware had he not received blows to the abdomen.

After taking statements from Price and Smilovitz, Houdini’s insurance company concluded that the death was due to the dressing-room incident and paid double indemnity.

Houdini published numerous books during his career (some of which were written by his good friend Walter B. Gibson, the creator of The Shadow)