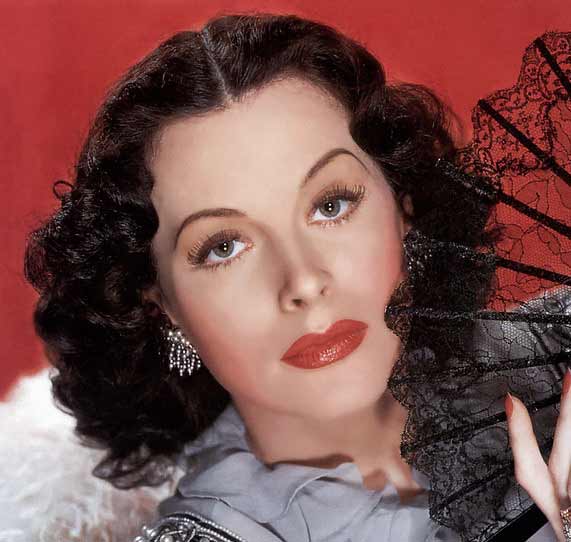 Hedy Lamarr ( born Hedwig Eva Maria Kiesler; September or November 9, 1914 – January 19, 2000) was an Austrian-born American actress, inventor, and film producer. She appeared in 30 films over a 28-year career in Europe and the United States and co-invented an early version of frequency-hopping spread spectrum communication, originally intended for torpedo guidance.

Lamarr was born in Vienna, Austria-Hungary, and acted in a number of Austrian, German, and Czech films in her brief early film career, including the controversial Ecstasy (1933). In 1937, she fled from her husband, a wealthy Austrian ammunition manufacturer, secretly moving to Paris and then on to London. There she met Louis B. Mayer, head of Metro-Goldwyn-Mayer (MGM) studio, who offered her a Hollywood movie contract, where he began promoting her as “the world’s most beautiful woman”.

She became a star through her performance in Algiers (1938), her first American film. She starred opposite Clark Gable in Boom Town and Comrade X (both 1940), and James Stewart in Come Live with Me and Ziegfeld Girl (both 1941). Her other MGM films include Lady of the Tropics (1939), H.M. Pulham, Esq. (1941), as well as Crossroads and White Cargo (both 1942); she was also borrowed by Warner Bros. for The Conspirators, and by RKO for Experiment Perilous (both 1944).

Dismayed by being typecast, Lamarr co-founded a new production studio and starred in its films: The Strange Woman (1946), and Dishonored Lady (1947). Her greatest success was as Delilah in Cecil B. DeMille’s Samson and Delilah (1949). She also acted on television before the release of her final film, The Female Animal (1958). She was honored with a star on the Hollywood Walk of Fame in 1960.

At the beginning of World War II, Lamarr and composer George Antheil developed a radio guidance system using frequency-hopping spread spectrum technology for Allied torpedoes, intended to defeat the threat of jamming by the Axis powers. She also helped improve aircraft aerodynamics for Howard Hughes while they dated during the war. Although the US Navy did not adopt Lamarr and Antheil’s invention until 1957, various spread-spectrum techniques are incorporated into Bluetooth technology and are similar to methods used in legacy versions of Wi-Fi. Recognition of the value of their work resulted in the pair being posthumously inducted into the National Inventors Hall of Fame in 2014.

Lamarr was born Hedwig Eva Maria Kiesler in 1914 in Vienna, Austria-Hungary, the only child of Emil Kiesler (1880–1935) and Gertrud “Trude” Kiesler (née Lichtwitz; 1894–1977). Her father was born to a Galician-Jewish family in Lemberg (now Lviv, Ukraine), and was a bank director at the Creditanstalt-Bankverein. Her mother was a concert pianist, born in Budapest to an upper-class Hungarian-Jewish family. She converted to Catholicism as an adult, at the insistence of her first husband, and raised her daughter Hedy as a Catholic as well, though she was not formally baptized at the time.

As a child, Kiesler showed an interest in acting and was fascinated by theatre and film. At the age of 12, she won a beauty contest in Vienna. She also began to associate invention with her father, who would take her out on walks, explaining how various technologies in society functioned.

After the Anschluss, she helped get her mother out of Austria and to the United States, where Gertrud Kiesler later became an American citizen. She put “Hebrew” as her race on her petition for naturalization, a term that had been frequently used in Europe.

Lamarr was married and divorced six times and had three children:

Following her sixth and final divorce in 1965, Lamarr remained unmarried for the last 35 years of her life.

Lamarr died in Casselberry, Florida, on January 19, 2000, of heart disease, aged 85. According to her wishes, she was cremated and her son Anthony Loder spread her ashes in Austria’s Vienna Woods.

In 1939, Lamarr was voted the “most promising new actress” of 1938 in a poll of area voters conducted by a Philadelphia Record film critic.

In 1951, British moviegoers voted Lamarr the tenth best actress of 1950, for her performance in Samson and Delilah.

In 1960, Lamarr was honored with a star on the Hollywood Walk of Fame for her contribution to the motion picture industry,] at 6247 Hollywood Blvd adjacent to Vine Street where the walk is centered.

In 1997, Lamarr and George Antheil were jointly honored with the Electronic Frontier Foundation’s Pioneer Award.

Also in 1997, Lamarr was the first woman to receive the Invention Convention’s BULBIE Gnass Spirit of Achievement Award, known as the “Oscars of inventing”.

In 2014, Lamarr and Antheil were posthumously inducted into the National Inventors Hall of Fame for frequency-hopping spread spectrum technology.

Also in 2014, Lamarr was given an honorary grave in Vienna’s Central Cemetery, where the remaining portion of her ashes was buried in November, shortly before her 100th birthday.

Asteroid 32730 Lamarr, discovered by Karl Reinmuth at Heidelberg Observatory in 1951, was named in her memory. The official naming citation was published by the Minor Planet Center on August 27, 2019 (M.P.C. 115894).