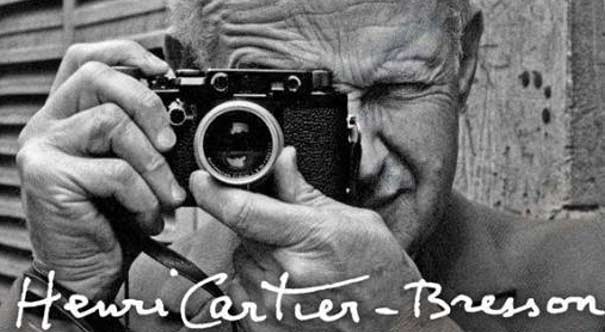 Cartier-Bresson was one of the founding members of Magnum Photos in 1947. In the 1970s he took up drawing—he had studied painting in the 1920s.

Henri Cartier-Bresson was born in Chanteloup-en-Brie, Seine-et-Marne, France, the oldest of five children. His father was a wealthy textile manufacturer, whose Cartier-Bresson thread was a staple of French sewing kits. His mother’s family were cotton merchants and landowners from Normandy, where Henri spent part of his childhood. His mother was descended from Charlotte Corday. The Cartier-Bresson family lived in a bourgeois neighborhood in Paris, Rue de Lisbonne, near Place de l’Europe and Parc Monceau. His parents supported him financially so Henri could pursue photography more freely than his contemporaries. Henri also sketched.

Young Henri took holiday snapshots with a Box Brownie; he later experimented with a 3×4 inch view camera. He was raised in traditional French bourgeois fashion, and was required to address his parents with formal vous rather than tu. His father assumed that his son would take up the family business, but Henri was strong-willed and also feared this prospect.

Cartier-Bresson attended École Fénelon, a Catholic school that prepared students for the Lycée Condorcet. A governess called “Miss Kitty” who came from across the Channel, instilled in him the love of – and competence in – the English language. The proctor caught him reading a book by Rimbaud or Mallarmé, and reprimanded him, “Let’s have no disorder in your studies!”. Cartier-Bresson said, “He used the informal ‘tu’, which usually meant you were about to get a good thrashing. But he went on, ‘You’re going to read in my office.’ Well, that wasn’t an offer he had to repeat.”

After trying to learn music, Cartier-Bresson was introduced to oil painting by his uncle Louis, a gifted painter. But the painting lessons were cut short when uncle Louis was killed in World War I.

In 1927 Cartier-Bresson entered a private art school and the Lhote Academy, the Parisian studio of the Cubist painter and sculptor André Lhote. Lhote’s ambition was to integrate the Cubists’ approach to reality with classical artistic forms; he wanted to link the French classical tradition of Nicolas Poussin and Jacques-Louis David to Modernism. Cartier-Bresson also studied painting with society portraitist Jacques Émile Blanche. During this period, he read Dostoevsky, Schopenhauer, Rimbaud, Nietzsche, Mallarmé, Freud, Proust, Joyce, Hegel, Engels and Marx. Lhote took his pupils to the Louvre to study classical artists and to Paris galleries to study contemporary art. Cartier-Bresson’s interest in modern art was combined with an admiration for the works of the Renaissance masters: Jan van Eyck, Paolo Uccello, Masaccio, Piero della Francesca. Cartier-Bresson regarded Lhote as his teacher of “photography without a camera.”

Returning to France, Cartier-Bresson recuperated in Marseille in late 1931 and deepened his relationship with the Surrealists. He became inspired by a 1930 photograph by Hungarian photojournalist Martin Munkacsi showing three naked young African boys, caught in near-silhouette, running into the surf of Lake Tanganyika. Titled Three Boys at Lake Tanganyika, this captured the freedom, grace and spontaneity of their movement and their joy at being alive. That photograph inspired him to stop painting and to take up photography seriously. He explained, “I suddenly understood that a photograph could fix eternity in an instant.”

He acquired the Leica camera with 50 mm lens in Marseilles that would accompany him for many years. The anonymity that the small camera gave him in a crowd or during an intimate moment was essential in overcoming the formal and unnatural behavior of those who were aware of being photographed. He enhanced his anonymity by painting all shiny parts of the Leica with black paint. The Leica opened up new possibilities in photography—the ability to capture the world in its actual state of movement and transformation. Restless, he photographed in Berlin, Brussels, Warsaw, Prague, Budapest and Madrid. His photographs were first exhibited at the Julien Levy Gallery in New York in 1933, and subsequently at the Ateneo Club in Madrid. In 1934 in Mexico, he shared an exhibition with Manuel Álvarez Bravo. In the beginning, he did not photograph much in his native France. It would be years before he photographed there extensively.

In 1934, Cartier-Bresson met a young Polish intellectual, a photographer named David Szymin who was called “Chim” because his name was difficult to pronounce. Szymin later changed his name to David Seymour. The two had much in common culturally. Through Chim, Cartier-Bresson met a Hungarian photographer named Endré Friedmann, who later changed his name to Robert Capa.

Cartier-Bresson died in Céreste (Alpes-de-Haute-Provence, France) on August 3, 2004, aged 95. No cause of death was announced. He was buried in the local cemetery nearby in Montjustin and was survived by his wife, Martine Franck, and daughter, Mélanie.

Cartier-Bresson spent more than three decades on assignment for Life and other journals. He traveled without bounds, documenting some of the great upheavals of the 20th century — the Spanish civil war, the liberation of Paris in 1944, the 1968 student rebellion in Paris, the fall of the Kuomintang in China to the communists, the assassination of Mahatma Gandhi, the Berlin Wall, and the deserts of Egypt. And along the way he paused to document portraits of Camus, Picasso, Colette, Matisse, Pound and Giacometti. But many of his most renowned photographs, such as Behind the Gare St. Lazare, are of seemingly unimportant moments of ordinary daily life.

Cartier-Bresson believed that what went on beneath the surface was nobody’s business but his own. He did recall that he once confided his innermost secrets to a Paris taxi driver, certain that he would never meet the man again.

In 2003, he created the Henri Cartier-Bresson Foundation in Paris with his wife, the Belgian photographer Martine Franck and his daughter to preserve and share his legacy. In 2018, the foundation relocated from the Montparnasse district to Le Marais.