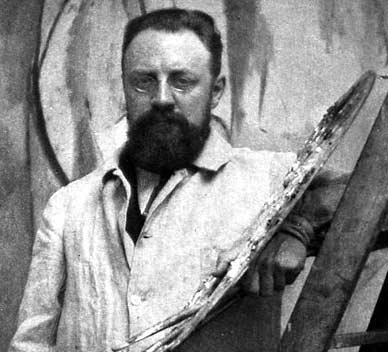 On view: The Museum of Modern Art, etc

Henri Émile Benoît Matisse (31 December 1869 – 3 November 1954) was a French artist, known for both his use of colour and his fluid and original draughtsmanship. He was a draughtsman, printmaker, and sculptor, but is known primarily as a painter. Matisse is commonly regarded, along with Pablo Picasso, as one of the artists who best helped to define the revolutionary developments in the visual arts throughout the opening decades of the twentieth century, responsible for significant developments in painting and sculpture.

The intense colorism of the works he painted between 1900 and 1905 brought him notoriety as one of the Fauves (wild beasts). Many of his finest works were created in the decade or so after 1906, when he developed a rigorous style that emphasized flattened forms and decorative pattern. In 1917, he relocated to a suburb of Nice on the French Riviera, and the more relaxed style of his work during the 1920s gained him critical acclaim as an upholder of the classical tradition in French painting.[6] After 1930, he adopted a bolder simplification of form. When ill health in his final years prevented him from painting, he created an important body of work in the medium of cut paper collage.

His mastery of the expressive language of colour and drawing, displayed in a body of work spanning over a half-century, won him recognition as a leading figure in modern art.

Matisse was born in Le Cateau-Cambrésis, in the Nord department in Northern France, the oldest son of a wealthy grain merchant.[8] He grew up in Bohain-en-Vermandois, Picardie, France. In 1887, he went to Paris to study law, working as a court administrator in Le Cateau-Cambrésis after gaining his qualification. He first started to paint in 1889, after his mother brought him art supplies during a period of convalescence following an attack of appendicitis. He discovered “a kind of paradise” as he later described it, and decided to become an artist, deeply disappointing his father.

In 1891, he returned to Paris to study art at the Académie Julian and became a student of William-Adolphe Bouguereau and Gustave Moreau. Initially he painted still lifes and landscapes in a traditional style, at which he achieved reasonable proficiency. Matisse was influenced by the works of earlier masters such as Jean-Baptiste-Siméon Chardin, Nicolas Poussin, and Antoine Watteau, as well as by modern artists, such as Édouard Manet, and by Japanese art. Chardin was one of the painters Matisse most admired; as an art student he made copies of four of Chardin’s paintings in the Louvre.

In 1896, Matisse, an unknown art student at the time, visited the Australian painter John Russell on the island Belle Île off the coast of Brittany. Russell introduced him to Impressionism and to the work of Vincent van Gogh—who had been a friend of Russell—and gave him a Van Gogh drawing. Matisse’s style changed completely; abandoning his earth-coloured palette for bright colours. He later said “Russell was my teacher, and Russell explained colour theory to me.” The same year, Matisse exhibited five paintings in the salon of the Société Nationale des Beaux-Arts, two of which were purchased by the state.

With the model Caroline Joblau, he had a daughter, Marguerite, born in 1894. In 1898, he married Amélie Noellie Parayre; the two raised Marguerite together and had two sons, Jean (born 1899) and Pierre (born 1900). Marguerite and Amélie often served as models for Matisse.

In 1898, on the advice of Camille Pissarro, he went to London to study the paintings of J. M. W. Turner and then went on a trip to Corsica. Upon his return to Paris in February 1899, he worked beside Albert Marquet and met André Derain, Jean Puy, and Jules Flandrin. Matisse immersed himself in the work of others and went into debt from buying work from painters he admired. The work he hung and displayed in his home included a plaster bust by Rodin, a painting by Gauguin, a drawing by van Gogh, and Cézanne’s Three Bathers. In Cézanne’s sense of pictorial structure and colour, Matisse found his main inspiration.

Many of Matisse’s paintings from 1898 to 1901 make use of a Divisionist technique he adopted after reading Paul Signac’s essay, “D’Eugène Delacroix au Néo-impressionisme”. His paintings of 1902–03, a period of material hardship for the artist, are comparatively somber and reveal a preoccupation with form. Having made his first attempt at sculpture, a copy after Antoine-Louis Barye, in 1899, he devoted much of his energy to working in clay, completing The Slave in 1903.

The contents of this page are sourced from Wikipedia article on 17 July 2020. The contents are available under the CC BY-SA 4.0 license.