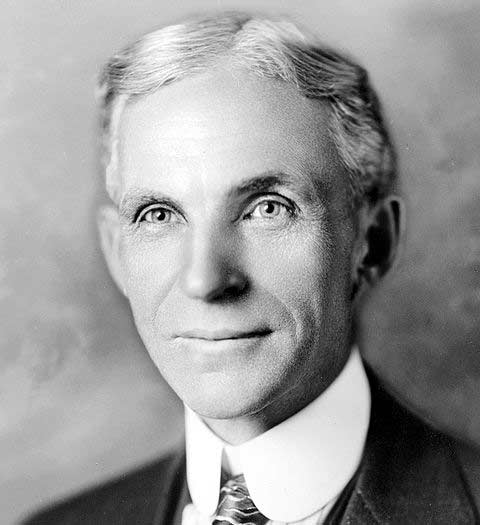 Known for: Founding and leading the Ford Motor Company
Pioneering a system that launched the mass production and sale of affordable automobiles to the public

Henry Ford (July 30, 1863 – April 7, 1947) was an American industrialist and business magnate, founder of the Ford Motor Company, and chief developer of the assembly line technique of mass production. By creating the first automobile that middle-class Americans could afford, he converted the automobile from an expensive curiosity into an accessible conveyance that profoundly impacted the landscape of the 20th century.

His introduction of the Model T automobile revolutionized transportation and the American industry. As the Ford Motor Company owner, he became one of the richest and best-known people in the world. He is credited with “Fordism”: mass production of inexpensive goods coupled with high wages for workers. Ford had a global vision, with consumerism as the key to peace.

His intense commitment to systematically lowering costs resulted in many technical and business innovations, including a franchise system that put dealerships throughout North America and major cities on six continents. Ford left most of his vast wealth to the Ford Foundation and arranged for his family to permanently control it.

Ford was also widely known for his pacifism during the first years of World War I, and for promoting antisemitic content, including The Protocols of the Elders of Zion, through his newspaper The Dearborn Independent, and the book The International Jew.

His father gave him a pocket watch in his early teens. At 15, Ford dismantled and reassembled the timepieces of friends and neighbors dozens of times, gaining the reputation of a watch repairman. At twenty, Ford walked four miles to their Episcopal church every Sunday.

Ford was devastated when his mother died in 1876. His father expected him to take over the family farm eventually, but he despised farm work. He later wrote, “I never had any particular love for the farm—it was the mother on the farm I loved.”

In 1879, Ford left home to work as an apprentice machinist in Detroit, first with James F. Flower & Bros., and later with the Detroit Dry Dock Co. In 1882, he returned to Dearborn to work on the family farm, where he became adept at operating the Westinghouse portable steam engine. He was later hired by Westinghouse to service their steam engines. During this period, Ford also studied bookkeeping at Goldsmith, Bryant & Stratton Business College in Detroit.

Ford stated two significant events occurred in 1875 when he was 12. He received a watch, and he witnessed the operation of a Nichols and Shepard road engine, “…the first vehicle other than horse-drawn that I had ever seen.” In his farm workshop, Ford built a “steam wagon or tractor” and a steam car, but thought “steam was not suitable for light vehicles,” as “the boiler was dangerous.” Ford also said that he “did not see the use of experimenting with electricity, due to the expense of trolley wires, and “no storage battery was in sight of a weight that was practical.” In 1885, Ford repaired an Otto engine, and in 1887 he built a four-cycle model with a one-inch bore and a three-inch stroke. In 1890, Ford started work on a two-cylinder engine.

Ford stated, “In 1892, I completed my first motor car, powered by a two-cylinder four horsepower motor, with a two-and-half-inch bore and a six-inch stroke, which was connected to a countershaft by a belt and then to the rear wheel by a chain. The belt was shifted by a clutch lever to control speeds at 10 or 20 miles per hour, augmented by a throttle. Other features included 28-inch wire bicycle wheels with rubber tires, a foot brake, a 3-gallon gasoline tank, and later, a water jacket around the cylinders for cooling. Ford added that “in the spring of 1893 the machine was running to my partial satisfaction and giving an opportunity further to test out the design and material on the road.” Between 1895 and 1896, Ford drove that machine about 1000 miles. He then started a second car in 1896, eventually building three of them in his home workshop.

When Edsel Ford, President of Ford Motor Company, died of cancer in May 1943, the elderly and ailing Henry Ford decided to assume the presidency. By this point, Ford, nearing 80 years old, had had several cardiovascular events (variously cited as heart attacks or strokes) and was mentally inconsistent, suspicious, and generally no longer fit for such immense responsibilities.

Most of the directors did not want to see him as president. But for the previous 20 years, though he had long been without any official executive title, he had always had de facto control over the company; the board and the management had never seriously defied him, and this time was no different. The directors elected him, and he served until the end of the war. During this period the company began to decline, losing more than $10 million a month ($147,750,000 today). The administration of President Franklin Roosevelt had been considering a government takeover of the company in order to ensure continued war production, but the idea never progressed.

His health failing, Ford ceded the company presidency to his grandson Henry Ford II in September 1945 and retired. He died on April 7, 1947, of a cerebral hemorrhage at Fair Lane, his estate in Dearborn, at the age of 83. A public viewing was held at Greenfield Village where up to 5,000 people per hour filed past the casket. Funeral services were held in Detroit’s Cathedral Church of St. Paul and he was buried in the Ford Cemetery in Detroit.

A compendium of short biographies of famous Freemasons, published by a Freemason lodge, lists Ford as a member. The Grand Lodge of New York confirms that Ford was a Freemason, and was raised in Palestine Lodge No. 357, Detroit, in 1894. When he received the 33rd degree of the Scottish Rite in 1940, he said, “Masonry is the best balance wheel the United States has.”

In 1923, Ford’s pastor, and head of his sociology department, Episcopal minister Samuel S. Marquis, claimed that Ford believed, or “once believed,” in reincarnation.

Ford published an anti-smoking book, circulated to youth in 1914, called The Case Against the Little White Slaver, which documented many dangers of cigarette smoking attested to by many researchers and luminaries. At the time, smoking was ubiquitous and not yet widely associated with health problems, making Ford’s opposition to cigarettes unusual.

Interest in materials science and engineering

Henry Ford had a long-held interest in materials science and engineering. He enthusiastically described his company’s adoption of vanadium steel alloys and subsequent metallurgic R&D work.

Ford also had a long-standing interest in plastics developed from agricultural products, particularly soybeans. He cultivated a relationship with George Washington Carver for this purpose. Soybean-based plastics were used in Ford automobiles throughout the 1930s in plastic parts such as car horns, paint, and other components. The project culminated in 1942, when Ford patented an automobile made almost entirely of plastic, attached to a tubular welded frame. It weighed 30% less than a steel car and was said to be able to withstand blows ten times greater than steel. It ran on grain alcohol (ethanol) instead of gasoline. The design never caught on.

Ford was interested in engineered woods (“Better wood can be made than is grown”) (at this time plywood and particle board were little more than experimental ideas); corn as a fuel source, via both corn oil and ethanol; and the potential uses of cotton. Ford was instrumental in developing charcoal briquets, under the brand name “Kingsford”. His brother-in-law, E.G. Kingsford, used wood scraps from the Ford factory to make the briquets.

In 1927 Ford partnered with Thomas Edison and Harvey Samuel Firestone (each contributing $25,000) to create the Edison Botanic Research Corp. in Fort Myers, Florida to seek a native source of rubber.

Ford was a prolific inventor and was awarded 161 U.S. patents.

Florida and Georgia residences and community

Ford had a vacation residence in Fort Myers, Florida next to that of Thomas Edison, which he bought in 1915 and used until approximately 1930. It still stands today as a museum.

He also had a vacation home (known today as the “Ford Plantation”) in Richmond Hill, Georgia, which is now a private community. Ford started buying land in this area and eventually owned 70,000 acres (110 square miles) there. In 1936, Ford broke ground for a beautiful Greek revival-style mansion on the banks of the Ogeechee River on the site of a 1730s plantation. The grand house, made of Savannah-gray brick, had marble steps, air conditioning, and an elevator. It sat on 55 acres of manicured lawns and flowering gardens. The house became the center of social gatherings with visitations by the Vanderbilts, Rockefellers, and the DuPonts. It remains the centerpiece of The Ford Plantation today.[113] Ford converted the 1870s-era rice mill into his personal research laboratory and powerhouse and constructed a tunnel from there to the new home, providing it with steam. He contributed substantially to the community, building a chapel and schoolhouse and employing numerous local residents.

Ford had an interest in “Americana”. In the 1920s, Ford began work to turn Sudbury, Massachusetts, into a themed historical village. He moved the schoolhouse supposedly referred to in the “Mary Had a Little Lamb” nursery rhyme from Sterling, Massachusetts, and purchased the historic Wayside Inn. The historical village plan never came to fruition. Ford repeated the concept of collecting historic structures with the creation of Greenfield Village in Dearborn, Michigan. It may have inspired the creation of Old Sturbridge Village as well. About the same time, he began collecting materials for his museum, which had a theme of practical technology. It was opened in 1929 as the Edison Institute. The museum has been greatly modernized and is still open today.