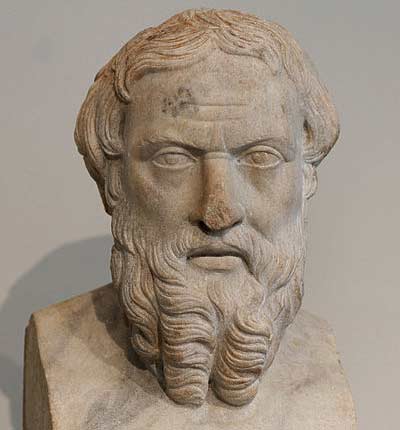 He is known for having written the book The Histories (Ancient Greek: Ἱστορίαι Historíai), a detailed record of his “inquiry” (Ancient Greek: ἱστορία historía) on the origins of the Greco-Persian Wars. He is widely considered to have been the first writer to have treated historical subjects using a method of systematic investigation—specifically, by collecting his materials and then critically arranging them into a historiographic narrative. On account of this, he is often referred to as “The Father of History,” a title first conferred on him by the first-century BC Roman orator Cicero.

Despite Herodotus’s historical significance, little is known about his personal life. His Histories primarily deals with the lives of Croesus, Cyrus, Cambyses, Smerdis, Darius, and Xerxes and the battles of Marathon, Thermopylae, Artemisium, Salamis, Plataea, and Mycale; however, his many cultural, ethnographical, geographical, historiographical, and other digressions form a defining and essential part of the Histories and contain a wealth of information.

Herodotus has been criticized for the fact that his book includes many obvious legends and fanciful accounts. Many authors, starting with the late fifth-century BC historian Thucydides, have accused him of making up stories for entertainment. However, Herodotus states that he is merely reporting what he has seen and been told, on several occasions saying that he does not himself believe the story that he reports. A sizable portion of the information he provides has since been confirmed by historians and archaeologists.

Modern scholars generally turn to Herodotus’s own writing for reliable information about his life, supplemented with ancient yet much later sources, such as the Byzantine Suda, an 11th-century encyclopedia that possibly took its information from traditional accounts.

The data are so few – they rest upon such late and slight authority; they are so improbable or so contradictory, that to compile them into a biography is like building a house of cards, which the first breath of criticism will blow to the ground. Still, certain points may be approximately fixed …

In 443 BC or shortly afterward, he migrated to Thurium as part of an Athenian-sponsored colony. Aristotle refers to a version of The Histories written by “Herodotus of Thurium,” and some passages in the Histories have been interpreted as proof that he wrote about southern Italy from personal experience there (IV, 15,99; VI, 127). Intimate knowledge of some events in the first years of the Peloponnesian War (VI, 91; VII, 133, 233; IX, 73) indicates that he might have returned to Athens, in which case it is possible that he died there during an outbreak of the plague.

Possibly he died in Macedonia instead, after obtaining the patronage of the court there; or else he died back in Thurium. There is nothing in the Histories that can be dated to later than 430 BC with any certainty, and it is generally assumed that he died not long afterward, possibly before his sixtieth year.

Herodotus announced the purpose and scope of his work at the beginning of his Histories:

Here are presented the results of the inquiry carried out by Herodotus of Halicarnassus. The purpose is to prevent the traces of human events from being erased by time, and to preserve the fame of the important and remarkable achievements produced by both Greeks and non-Greeks; among the matters covered is, in particular, the cause of the hostilities between Greeks and non-Greeks.

His record of the achievements of others was an achievement in itself, though the extent of it has been debated. Herodotus’ place in history and his significance may be understood according to the traditions within which he worked. His work is the earliest Greek prose to have survived intact.

However, Dionysius of Halicarnassus, a literary critic of Augustan Rome, listed seven predecessors of Herodotus, describing their works as simple, unadorned accounts of their own and other cities and people, Greek or foreign, including popular legends, sometimes melodramatic and naïve, often charming – all traits that can be found in the work of Herodotus himself.

Modern historians regard the chronology as uncertain, but according to the ancient account, these predecessors included Dionysius of Miletus, Charon of Lampsacus, Hellanicus of Lesbos, Xanthus of Lydia, and, the best attested of them all, Hecataeus of Miletus. Of these, only fragments of Hecataeus’s works survived, and the authenticity of these is debatable, but they provide a glimpse into the kind of tradition within which Herodotus wrote his own Histories.