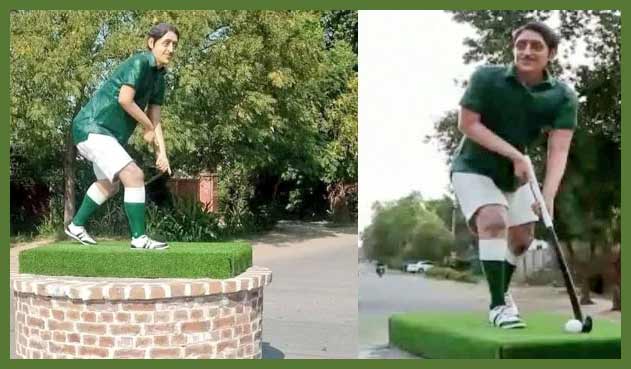 Bahawalpur: Thieves in Bahawalpur did not leave the statue of hockey Olympian Samiullah Khan. Hockey and ball were stolen from his statue. The statue was erected to pay homage to the national hero.

A Bahawalpur police spokesman said a statue of hockey Olympian Samiullah was erected about a month ago in the Model Town area of ​​Bahawalpur. Telling the media about the incident, he said that the thieves stole the ball two days ago while the hockey also disappeared on Saturday night.

It may be recalled that Pakistani hockey player Samiullah was born on September 6, 1951 in Bahawalpur. Samiullah had represented Pakistan in a number of international hockey tournaments from the 1976 Montreal Olympics to 1982.

Kent police have registered a case at the request of the citizen and initiated action. Police are investigating with the help of CCTV cameras and information from the surrounding area.

He said that Samiullah Khan is a hero of Pakistan, his services are endless. We will not allow anyone to insult those who make Pakistan famous. We will not tolerate the desecration of their monuments, we will protect them.