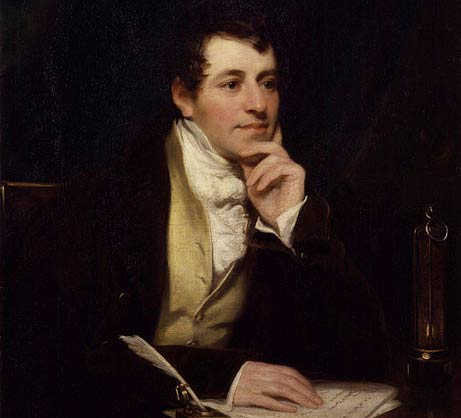 Sir Humphry Davy, 1st Baronet PRS MRIA FGS FRS (17 December 1778 – 29 May 1829) was a Cornish chemist and inventor who invented the Davy lamp and a very early form of arc lamp. He is also remembered for isolating, by using electricity, a series of elements for the first time: potassium and sodium in 1807 and calcium, strontium, barium, magnesium and boron the following year, as well as for discovering the elemental nature of chlorine and iodine. Davy also studied the forces involved in these separations, inventing the new field of electrochemistry.

In 1799 he experimented with nitrous oxide and was astonished at how it made him laugh, so he nicknamed it “laughing gas” and wrote about its potential anaesthetic properties in relieving pain during surgery.

Davy was a baronet, President of the Royal Society (PRS), Member of the Royal Irish Academy (MRIA), Fellow of the Geological Society (FGS), and a member of the American Philosophical Society (elected 1810). Berzelius called Davy’s 1806 Bakerian Lecture On Some Chemical Agencies of Electricity “one of the best memoirs which has ever enriched the theory of chemistry.”

Davies Giddy met Davy in Penzance carelessly swinging on the half-gate of Dr. Borlase’s house, and interested by his talk invited him to his house at Tredrea and offered him the use of his library. This led to an introduction to Dr. Edwards, who lived at Hayle Copper House. Edwards was a lecturer in chemistry in the school of St. Bartholomew’s Hospital.

He permitted Davy to use his laboratory and possibly directed his attention to the floodgates of the port of Hayle, which were rapidly decaying as a result of the contact between copper and iron under the influence of seawater. Galvanic corrosion was not understood at that time, but the phenomenon prepared Davy’s mind for subsequent experiments on the ship’s copper sheathing.

Gregory Watt, son of James Watt, visited Penzance for his health’s sake, and while lodging at Davy’s house became a friend and gave him instructions in chemistry. Davy was acquainted with the Wedgwood family, who spent a winter at Penzance.

Thomas Beddoes and John Hailstone were engaged in a geological controversy on the rival merits of the Plutonian and Neptunist hypotheses. They traveled together to examine the Cornish coast accompanied by Davies Gilbert and made Davy’s acquaintance. Beddoes, who had established at Bristol a ‘Pneumatic Institution,’ needed an assistant to superintend the laboratory.

Gilbert recommended Davy, and in 1798 Gregory Watt showed Beddoes the Young man’s Researches on Heat and Light, which were subsequently published by him in the first volume of West-Country Contributions. After prolonged negotiations, mainly by Gilbert, Mrs. Davy and Borlase consented to Davy’s departure, but Tonkin wished him to remain in his native town as a surgeon and altered his will when he found that Davy insisted on going to Dr. Beddoes.

In 1802, Humphry Davy had what was then, the most powerful electrical battery in the world at the Royal Institution. With it, Davy created the first incandescent light by passing an electric current through a thin strip of platinum, chosen because the metal had an extremely high melting point. It was neither sufficiently bright nor long-lasting enough to be of practical use but demonstrated the principle. By 1806 he was able to demonstrate a much more powerful form of electric lighting to the Royal Society in London. It was an early form of arc light that produced its illumination from an electric arc created between two charcoal rods.

In 1818, Davy was awarded a baronetcy. Although Sir Francis Bacon (also later made a peer) and Sir Isaac Newton had already been knighted, this was, at the time, the first such honor ever conferred on a man of science in Britain. This was followed a year later with the Presidency of the Royal Society.

Davy’s laboratory assistant, Michael Faraday, went on to enhance Davy’s work and would become the more famous and influential scientist. Davy is supposed to have even claimed Faraday as his greatest discovery. Davy later accused Faraday of plagiarism, however, causing Faraday (the first Fullerian Professor of Chemistry) to cease all research in electromagnetism until his mentor’s death.

According to one of Davy’s biographers, June Z. Fullmer, he was a deist.

Of a sanguine, somewhat irritable temperament, Davy displayed characteristic enthusiasm and energy in all his pursuits. As is shown by his verses and sometimes by his prose, his mind was highly imaginative; the poet Coleridge declared that if he “had not been the first chemist, he would have been the first poet of his age”, and Southey said that “he had all the elements of a poet; he only wanted the art.” In spite of his ungainly exterior and peculiar manner, his happy gifts of exposition and illustration won him extraordinary popularity as a lecturer, his experiments were ingenious and rapidly performed, and Coleridge went to hear him “to increase his stock of metaphors.”

The dominating ambition of his life was to achieve fame; occasional petty jealousy did not diminish his concern for the “cause of humanity”, to use a phrase often employed by him in connection with his invention of the miners’ lamp. Careless about etiquette, his frankness sometimes exposed him to annoyances he might have avoided by the exercise of tact. 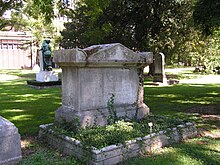 He spent the last months of his life writing Consolations in Travel, an immensely popular, somewhat freeform compendium of poetry, thoughts on science and philosophy. Published posthumously, the work became a staple of both scientific and family libraries for several decades afterward. Davy spent the winter in Rome, hunting in the Campagna on his fiftieth birthday. But on 20 February 1829, he had another stroke. After spending many months attempting to recuperate, Davy died in a hotel room in Geneva, Switzerland, on 29 May 1829. He had wished to be buried where he died but had also wanted the burial delayed in case he was only comatose.

He refused to allow a post-mortem for similar reasons. But the laws of Geneva did not allow any delay and he was given a public funeral on the following Monday, in the Plainpalais Cemetery, outside the city walls.