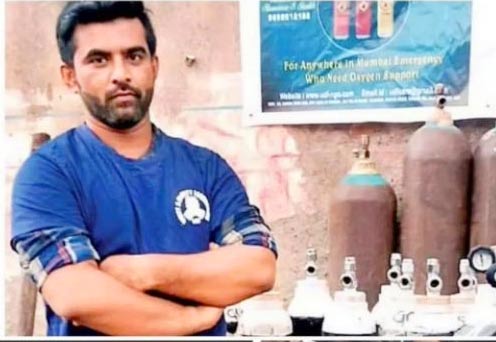 New Delhi: The number of Corona patients in India has risen alarmingly in recent times, with a deadly epidemic plaguing the neighboring country’s health system, but young Muslims are coming forward to help patients there. In this regard, a young Muslim Shahnawaz Sheikh even sold his valuable car and jewelry to help the patients.

While the Indian media itself, including the foreign media, is currently criticizing the poor performance of the Indian Prime Minister Narendra Modi government, there is talk of a 31-year-old Muslim youth from the Azamgarh area of ​​Uttar Pradesh.

Shahnawaz Sheikh used to distribute rations in a poor slum near his home in Korona when his friend’s pregnant sister died due to lack of oxygen while going to the hospital in a rickshaw and this incident became the lifeblood of both the friends.

He changed his mind and both of them started providing free oxygen cylinders to the patients.

Muslim youth have so far provided oxygen cylinders to more than 4,000 patients. Due to the increasing demand for cylinders, they had to form a regular team for this work which works 24 hours in two shifts. The team members are also divided into two groups.

One cylinder is delivered to and from the patient and the other cylinder is filled with oxygen gas.

He said that 3 months ago he was answering 50 calls daily for oxygen whereas now 500 to 600 calls come. Due to increasing demand and lack of funds, I had to sell the car for Rs 2.2 million. If that didn’t work, I sold the gold chain. The good thing is that the oxygen people charge me Rs. 300 per cylinder and the rest charge Rs. 500 to 600.