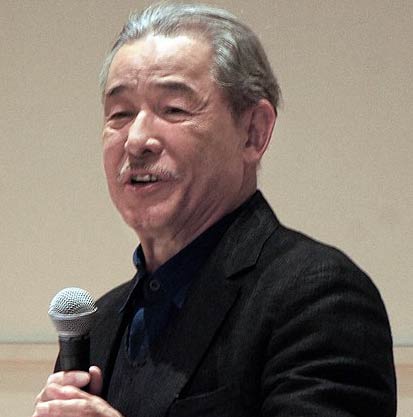 Issey Miyake (born 22 April 1938) is a Japanese fashion designer. He is known for his technology-driven clothing designs, exhibitions and fragrances, such as L’eau d’Issey, which became his most well-known product.

Miyake was born on April 22, 1938 in Hiroshima, Japan. He studied graphic design at the Tama Art University in Tokyo, graduating in 1964. After graduation, he worked in Paris and New York City. Returning to Tokyo in 1970, he founded the Miyake Design Studio, a high-end producer of women’s fashion.

In the late 1980s, he began to experiment with new methods of pleating that would allow both flexibility of movement for the wearer as well as ease of care and production. The garments are cut and sewn first, then sandwiched between layers of paper and fed into a heat press, where they are pleated. The fabric’s ‘memory’ holds the pleats and when the garments are liberated from their paper cocoon, they are ready-to wear. He did the costume for Ballett Frankfurt with pleats in a piece named “the Loss of Small Detail” William Forsythe and also work on ballet “Garden in the setting”.

He had a long friendship with Austrian-born pottery artist Dame Lucie Rie. She bequeathed to him her substantial collection of ceramic and porcelain buttons, which he integrated into his designs and presented in new collections.

He also developed a friendship with Apple’s Steve Jobs and produced the black turtlenecks which would become a part of Jobs’ signature attire. Jobs said, “So I asked Issey to make me some of his black turtlenecks that I liked, and he made me like a hundred of them.”

Legendary designer Geoffrey Beene stated that he admired Issey Miyake for Miyake’s technique, this in an interview with poet/artist Steven Vita in Veery journal, 1991.

In March 1992 he was quoted in the International Herald Tribune as saying “Design is not for philosophy—it’s for life.”

In 1994 and 1999, Miyake turned over the design of the men’s and women’s collections respectively, to his associate, Naoki Takizawa, so that he could return to research full-time. In 2007, Naoki Takizawa opened his own brand supported by the Issey Miyake Group and was replaced as Creative Director by Dai Fujiwara who ran the House of Issey Miyake until 2012. The design duties were split as of the Spring/Summer 2012 collections, with Yoshiyuki Miyamae appointed head designer of the women’s collection and Yusuke Takahashi designing the men’s line.

As of 2012, he is one of the co-Directors of 21 21 DESIGN SIGHT, Japan’s first design museum. From March 2016 the largest retrospective of his work was organized at The National Art Center, Tokyo, celebrating 45 years of career.