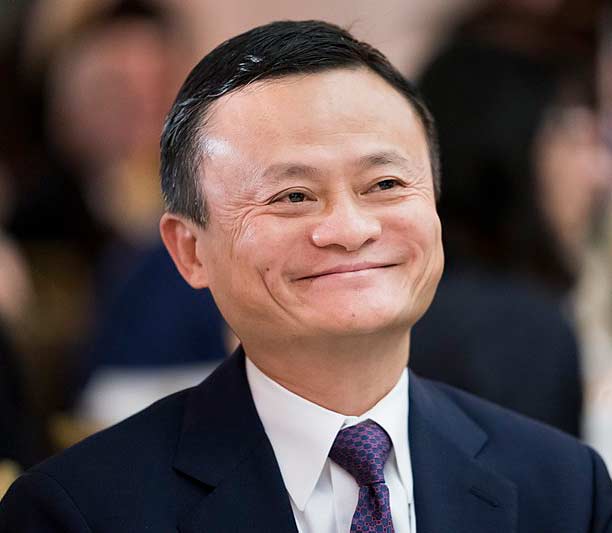 Known for: Co-founder and former executive chairman of Alibaba Group

Jack Ma Yun (born 10 September 1964), is a Chinese business magnate, investor and philanthropist. He is the co-founder and former executive chairman of Alibaba Group, a multinational technology conglomerate. Ma is a strong proponent of an open and market-driven economy.

In 2017, Ma was ranked second in the annual “World’s 50 Greatest Leaders” list by Fortune. He has widely been considered an informal global ambassador for Chinese business, and is an influential figure for the community of startup businesses. In September 2018, he announced that he would retire from Alibaba and pursue educational work, philanthropy, and environmental causes; the following year, Daniel Zhang succeeded him as executive chairman.

As of January 2021, with a net worth of $61.4 billion, Ma is the third-wealthiest person in China (after Zhong Shanshan and Ma Huateng), as well as one of the wealthiest people in the world, ranked 20th by Forbes. In 2019, Forbes named Ma in its list of “Asia’s 2019 Heroes of Philanthropy” for his work supporting underprivileged communities in China, Africa, Australia, and the Middle East.

Jack Ma was born in Hangzhou, Zhejiang, China. He began studying English at a young age by conversing with English-speakers at Hangzhou International Hotel. For nine years, Ma would ride 27 km (17 miles) on his bicycle to give tourists tours of the area to practice his English. He became pen pals with one of those foreigners, who nicknamed him “Jack” because he found it hard to pronounce his Chinese name.

Later in his youth, Ma struggled attending college. Ma failed the entrance exam for the Hangzhou Teachers College twice as his weak point was mathematics. The Chinese entrance exams, held annually, took Ma three years to pass. Ma attended Hangzhou Teacher’s Institute (currently known as Hangzhou Normal University) and graduated in 1988 with a Bachelor of Arts in English. While at school, Ma was head of the student council. After graduation, he became a lecturer in English and international trade at Hangzhou Dianzi University. He also claims to have applied ten times to Harvard Business School and got rejected each time.