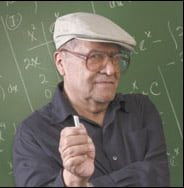 Jaime Alfonso Escalante Gutiérrez (December 31, 1930 – March 30, 2010) was a Bolivian-American educator known for teaching students calculus from 1974 to 1991 at Garfield High School in East Los Angeles. Escalante was the subject of the 1988 film, Stand and Deliver, in which he is portrayed by Edward James Olmos.

Escalante was born in 1930 in La Paz, Bolivia. Both of his parents were teachers. Escalante was proud of his Aymara heritage.

Escalante taught mathematics and physics for 12 years in Bolivia before he immigrated to the United States. He worked various different jobs while teaching himself English and earning another college degree before eventually returning to the classroom as an educator.

In 1974, he began to teach at Garfield High School. Escalante eventually changed his mind about returning to work when he found 12 students willing to take an algebra class.

Shortly after Escalante came to Garfield High School, its accreditation became threatened. Instead of gearing classes to poorly performing students, Escalante offered AP Calculus. He had already earned the criticism of an administrator, who disapproved of his requiring the students to answer a homework question before being allowed into the classroom. “He told me to just get them inside,” Escalante reported, “but I said, there is no teaching, no learning going on.”

Determined to change the status quo, Escalante persuaded a few students that they could control their futures with the right education. He promised them that they could get jobs in engineering, electronics, and computers if they would learn math: “I’ll teach you math and that’s your language. With that, you’re going to make it. You’re going to college and sit in the first row, not the back because you’re going to know more than anybody.”

The school administration opposed Escalante frequently during his first few years. He was threatened with dismissal by an assistant principal because he was coming in too early, leaving too late, and failing to get administrative permission to raise funds to pay for his students’ Advanced Placement tests. The opposition changed with the arrival of a new principal, Henry Gradillas. Aside from allowing Escalante to stay, Gradillas overhauled the academic curriculum at Garfield, reducing the number of basic math classes and requiring those taking basic math to take algebra as well. Jaime Escalante denied extracurricular activities to students who failed to maintain a C average and to new students who failed basic skills tests. One of Escalante’s students remarked, “If he wants to teach us that bad, we can learn.”

Escalante continued to teach at Garfield and instructed his first calculus class in 1978. He recruited fellow teacher Ben Jiménez and taught calculus to five students, two of whom passed the AP calculus test. The following year, the class size increased to nine students, seven of whom passed the AP calculus test. By 1981, the class had increased to 15 students, 14 of whom passed. Escalante placed a high priority on pressuring his students to pass their math classes, particularly calculus. Jaime Escalante rejected the common practice of ranking students from first to last but frequently told his students to press themselves as hard as possible in their assignments.