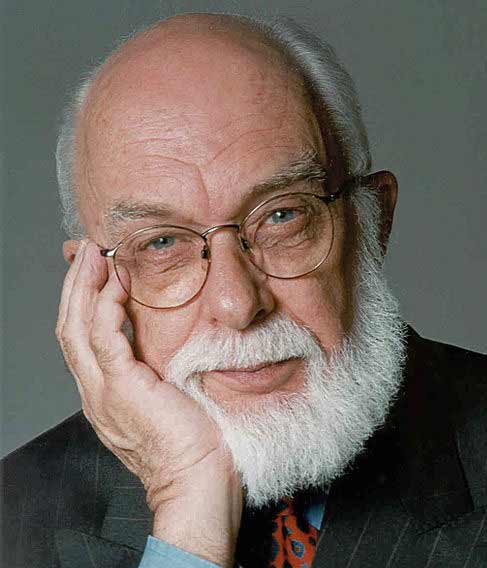 James Randi (born Randall James Hamilton Zwinge; August 7, 1928) is a Canadian-American retired stage magician and a scientific skeptic who has extensively challenged paranormal and pseudoscientific claims.[8] Randi is the co-founder of the Committee for Skeptical Inquiry (CSI), originally known as the Committee for the Scientific Investigation of Claims of the Paranormal (CSICOP). He is also the founder of the James Randi Educational Foundation (JREF). He began his career as a magician under the stage name The Amazing Randi and later chose to devote most of his time to investigating paranormal, occult, and supernatural claims, which he collectively calls “woo-woo”. Randi retired from practicing magic at age 60, and from the JREF at 87.

Although often referred to as a “debunker”, Randi has said he dislikes the term’s connotations and prefers to describe himself as an “investigator”. He has written about paranormal phenomena, skepticism, and the history of magic. He was a frequent guest on The Tonight Show Starring Johnny Carson, famously exposing fraudulent faith healer Peter Popoff, and was occasionally featured on the television program Penn & Teller: Bullshit!

Before Randi’s retirement, JREF sponsored the One Million Dollar Paranormal Challenge, which offered a prize of one million US dollars to eligible applicants who could demonstrate evidence of any paranormal, supernatural, or occult power or event under test conditions agreed to by both parties. The paranormal challenge was officially terminated by the JREF in 2015. The foundation continues to make grants to non-profit groups that encourage critical thinking and a fact-based world view.

Randi was born on August 7, 1928 in Toronto, Ontario, Canada, the son of Marie Alice (née Paradis) and George Randall Zwinge. He has a younger brother and sister. He took up magic after seeing Harry Blackstone Sr. and reading conjuring books while spending 13 months in a body cast following a bicycle accident. He confounded doctors who expected he would never walk again. Randi often skipped classes and, at 17, dropped out of high school to perform as a conjurer in a carnival roadshow. He practised as a mentalist in local nightclubs and at Toronto’s Canadian National Exhibition and wrote for Montreal’s tabloid press.

In his twenties, Randi posed as an astrologer and, to establish that they were actually doing simple tricks, he briefly wrote an astrological column in the Canadian tabloid Midnight under the name “Zo-ran” by simply shuffling up items from newspaper astrology columns and pasting them randomly into a column. In his thirties, Randi worked in the UK, Europe, Philippine nightclubs, and all across Japan. He witnessed many tricks that were presented as being supernatural. One of his earliest reported experiences is that of seeing an evangelist using a version of the “one-ahead” technique to convince churchgoers of his divine powers.

When he hosted his own radio show in the 1960s, Randi lived in a small house in Rumson, New Jersey, that featured a sign on the premises that read: “Randi — Charlatan”. In a Fort Lauderdale public library in 1986, Randi, who had recently moved to Florida, met Venezuelan artist José Alvarez (born Deyvi Orangel Peña Arteaga). They eventually moved in together, and were married in Washington on July 2, 2013, with Randi turning 85 the next month. They live in Plantation, Florida.

In 1987, Randi became a naturalized citizen of the United States. Randi has said that one reason he became an American citizen was an incident while he was on tour with Alice Cooper where the Royal Canadian Mounted Police searched the band’s lockers during a performance. Nothing illicit or illegal was found, yet the RCMP trashed the room.

In February 2006, Randi underwent coronary artery bypass surgery. In early February 2006, he was declared to be in stable condition and “receiving excellent care” with his recovery proceeding well. The weekly commentary updates to his Web site were made by guests while he was hospitalized. Randi recovered after his surgery and was able to help organize and attend the 2007 Amaz!ng Meeting (T.A.M.) in Las Vegas, Nevada, his annual convention of scientists, magicians, skeptics, atheists and freethinkers.

Randi was diagnosed with colorectal cancer in June 2009. He had a series of small tumors removed from his intestines during laparoscopic surgery. He announced the diagnosis a week later at The Amaz!ng Meeting 7, as well as the fact that he was scheduled to begin chemotherapy in the following weeks. He also said at the conference: “One day, I’m gonna die. That’s all there is to it. Hey, it’s too bad, but I’ve got to make room. I’m using a lot of oxygen and such—I think it’s good use of oxygen myself, but of course, I’m a little prejudiced on the matter.”

Randi underwent his final chemotherapy session on December 31, 2009, later saying that his chemotherapy experience was not as unpleasant as he had imagined it might be. In a video posted April 12, 2010, Randi stated that he had been given a clean bill of health.

In the 1993 documentary Secrets of the Psychics, Randi stated, “I’ve never involved myself in narcotics of any kind; I don’t smoke; I don’t drink, because that can easily just fuzz the edges of my rationality, fuzz the edges of my reasoning powers, and I want to be as aware as I possibly can. That means giving up a lot of fantasies that might be comforting in some ways, but I’m willing to give that up in order to live in an actually real world, as close as I can get to it”.

In a video released on October 16, 2017, Randi revealed that he had recently suffered a minor stroke, and that he was under medical advice not to travel during his recovery, so would be unable to attend CSICon 2017 in Las Vegas later that month.