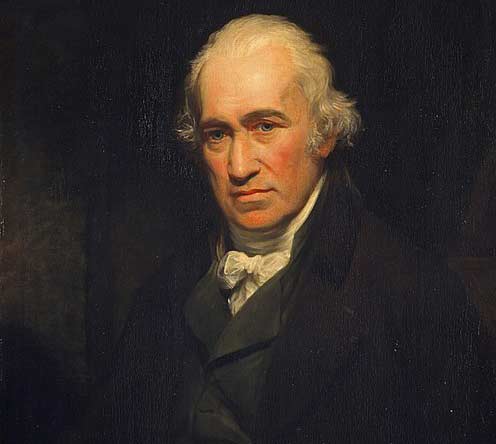 James Watt FRS FRSE (30 January 1736 (19 January 1736 OS) – 25 August 1819) was a Scottish inventor, mechanical engineer, and chemist who improved on Thomas Newcomen’s 1712 Newcomen steam engine with his Watt steam engine in 1776, which was fundamental to the changes brought by the Industrial Revolution in both his native Great Britain and the rest of the world.

While working as an instrument maker at the University of Glasgow, Watt became interested in the technology of steam engines. He realised that contemporary engine designs wasted a great deal of energy by repeatedly cooling and reheating the cylinder. Watt introduced a design enhancement, the separate condenser, which avoided this waste of energy and radically improved the power, efficiency, and cost-effectiveness of steam engines. Eventually he adapted his engine to produce rotary motion, greatly broadening its use beyond pumping water.

Watt attempted to commercialise his invention, but experienced great financial difficulties until he entered a partnership with Matthew Boulton in 1775. The new firm of Boulton and Watt was eventually highly successful and Watt became a wealthy man. In his retirement, Watt continued to develop new inventions though none was as significant as his steam engine work.

He developed the concept of horsepower, and the SI unit of power, the watt, was named after him.

On 16 July 1764 married his cousin Margaret Miller (d. 1773). They had two children, Margaret (1767–1796) and James (1769–1848). In 1791 their daughter married James Miller; their son did not marry. In September 1773 while Watt was working in the Scottish Highlands he learned that his wife, who was pregnant with their third child, was seriously ill. He immediately returned home but found that she had died and their child was stillborn.

James Watt was born on 19 January 1736 in Greenock, Renfrewshire, the eldest of the five surviving children of Agnes Muirhead (1703–1755) and James Watt (1698–1782). His mother came from a distinguished family, was well educated and said to be of forceful character, while his father was a shipwright, ship owner and contractor, and served as the Greenock’s chief baillie in 1751. Watts parents were Presbyterians and strong Covenanters, however despite a religious upbringing he later became a deist. Watt’s grandfather, Thomas Watt (1642–1734), was a teacher of mathematics, surveying and navigation and baillie to the Baron of Cartsburn.

Initially Watt was educated at home by his mother, later going on to attend Greenock Grammar School. There he exhibited an aptitude for mathematics, while Latin and Greek failed to interest him.

He is said to have suffered prolonged bouts of ill-health as a child and from frequent headaches all his life.

After leaving school Watt worked in the workshops of his father’s businesses, demonstrating considerable dexterity and skill in creating engineering models. After his father suffered some unsuccessful business ventures Watt left Greenock to seek employment in Glasgow as a mathematical instrument maker.

Watt was much honoured in his own time. In 1784 he was made a fellow of the Royal Society of Edinburgh, and was elected as a member of the Batavian Society for Experimental Philosophy, of Rotterdam in 1787. In 1789 he was elected to the elite group, the Smeatonian Society of Civil Engineers. In 1806 he was conferred the honorary Doctor of Laws by the University of Glasgow. The French Academy elected him a Corresponding Member and he was made a Foreign Associate in 1814.

The watt is named after James Watt for his contributions to the development of the steam engine, and was adopted by the Second Congress of the British Association for the Advancement of Science in 1889 and by the 11th General Conference on Weights and Measures in 1960 as the unit of power incorporated in the International System of Units (or “SI”).

On 29 May 2009 the Bank of England announced that Boulton and Watt would appear on a new £50 note. The design is the first to feature a dual portrait on a Bank of England note, and presents the two industrialists side by side with images of Watt’s steam engine and Boulton’s Soho Manufactory. Quotes attributed to each of the men are inscribed on the note: “I sell here, sir, what all the world desires to have—POWER” (Boulton) and “I can think of nothing else but this machine” (Watt). The inclusion of Watt is the second time that a Scot has featured on a Bank of England note (the first was Adam Smith on the 2007 issue £20 note). In September 2011 it was announced that the notes would enter circulation on 2 November.

In 2011 he was one of seven inaugural inductees to the Scottish Engineering Hall of Fame.