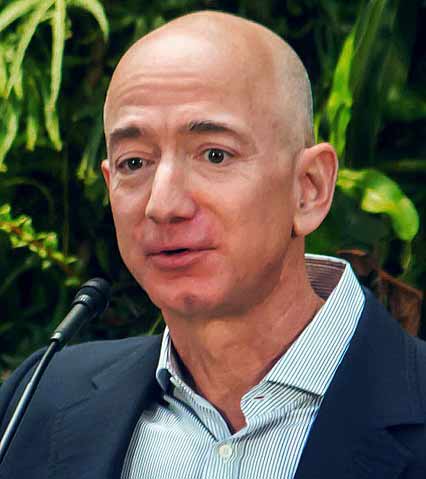 Jeffrey Preston Bezos ( born January 12, 1964) is an American internet entrepreneur, industrialist, media proprietor, and investor. Bezos is the founder and CEO of the multi-national technology company Amazon. He is the richest person in the world according to the Forbes Real-Time Billionaires ranking.

Born in Albuquerque and raised in Houston and later Miami, Bezos graduated from Princeton University in 1986. He holds a degree in electrical engineering and computer science. He worked on Wall Street in a variety of related fields from 1986 to early 1994. Bezos founded Amazon in late 1994, on a cross-country road trip from New York City to Seattle. The company began as an online bookstore and has since expanded to a wide variety of other e-commerce products and services, including video and audio streaming, cloud computing, and artificial intelligence. It is currently the world’s largest online sales company, the largest Internet company by revenue, and the world’s largest provider of virtual assistants and cloud infrastructure services through its Amazon Web Services branch.

Bezos founded the aerospace manufacturer and sub-orbital spaceflight services company Blue Origin in 2000. Blue Origin’s New Shepard vehicle reached space in 2015, and afterwards successfully landed back on Earth. The company has upcoming plans to begin commercial suborbital human spaceflight. He also purchased the major American newspaper The Washington Post in 2013 for $250 million, and manages many other investments through his Bezos Expeditions venture capital firm.

The first centibillionaire on the Forbes wealth index, Bezos was named the “richest man in modern history” after his net worth increased to $150 billion in July 2018. In August 2020, according to Forbes, he had a net worth exceeding $200 billion. In 2020 during the COVID-19 pandemic, Bezos’s wealth grew by approximately $24 billion.

On February 2, 2021, Bezos announced that he would step down as the CEO of Amazon sometime in the third quarter of 2021, and transition into the role of executive chairman. He is due to be replaced as CEO by Andy Jassy, the chief of Amazon’s cloud computing division.

Jeffrey Preston Jorgensen was born in Albuquerque, New Mexico on January 12, 1964, the son of Jacklyn (née Gise) and Theodore Jørgensen. His biological great-grandfather John Jørgensen immigrated to the U.S. from Holbæk in the Zealand region of Denmark in the late 19th century. At the time of his birth, his mother was a 17-year-old high school student and his father was 19. After completing high school despite challenging conditions, Jacklyn attended night school while bringing baby Jeff along. After his parents divorced, his mother married Cuban immigrant Miguel “Mike” Bezos in April 1968. Shortly after the wedding, Mike adopted four-year-old Jorgensen, whose surname was then changed to Bezos.

The family moved to Houston, Texas, where Mike worked as an engineer for Exxon after he received a degree from the University of New Mexico. Bezos attended River Oaks Elementary School in Houston from fourth to sixth grade. Bezos’s maternal grandfather was Lawrence Preston Gise, a regional director of the U.S. Atomic Energy Commission (AEC) in Albuquerque. Gise retired early to his family’s ranch near Cotulla, Texas, where Bezos would spend many summers in his youth. Bezos would later purchase this ranch and expand it from 25,000 acres (10,117 ha) to 300,000 acres (121,406 ha). His maternal grandmother was Mattie Louise Gise (née Strait), through whom he is a cousin of country singer George Strait.

Bezos displayed scientific interests and technological proficiency, and once rigged an electric alarm to keep his younger siblings out of his room. The family moved to Miami, Florida, where Bezos attended Miami Palmetto High School. While Bezos was in high school, he worked at McDonald’s as a short-order line cook during the breakfast shift. He attended the Student Science Training Program at the University of Florida. He was high school valedictorian, a National Merit Scholar, and a Silver Knight Award winner in 1982. In his graduation speech, Bezos told the audience he dreamed of the day when mankind would colonize space. A local newspaper quoted his intention “to get all people off the earth and see it turned into a huge national park”.

In 1992, Bezos was working for D. E. Shaw in Manhattan when he met novelist MacKenzie Tuttle, who was a research associate at the firm; the couple married a year later. In 1994, they moved across the country to Seattle, Washington, where Bezos founded Amazon. Bezos and his now ex-wife MacKenzie are the parents of four children: three sons, and one daughter adopted from China.

In March 2003, Bezos was one of three passengers in a helicopter that crashed in West Texas after the craft’s tail boom hit a tree. Bezos sustained minor injuries and was discharged from a local hospital the same day.

In 2016, Bezos played a Starfleet official in the movie Star Trek Beyond, and joined the cast and crew at a San Diego Comic-Con screening. He had lobbied Paramount for the role apropos of Alexa and his personal/professional interest in speech recognition. His one line consisted of a response to an alien in distress: “Speak Normally.” In his initial discussion of the project which became Alexa with his technical advisor Greg Hart in 2011, Bezos told him that the goal was to create “the Star Trek computer.” Bezos’ family office Zefram LLC is named after Zefram Cochrane a character from Star Trek.

On February 7, 2019, Bezos published an online essay in which he accused American Media, Inc. owner David Pecker of “extortion and blackmail” for threatening to publish intimate photos of Bezos and Lauren Sánchez, if he did not stop his investigation into how his text messages and other photos had been leaked to the National Enquirer.

The contents of this page are sourced from Wikipedia article on 5 Feb 2021. The contents are available under the CC BY-SA 4.0 license.