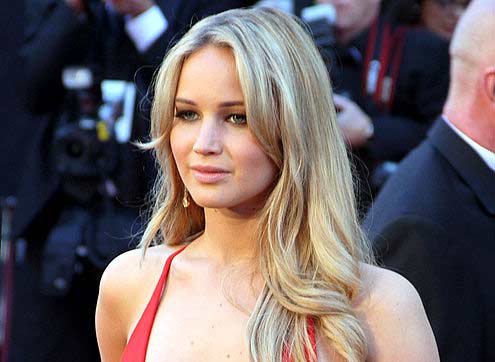 Jennifer Shrader Lawrence (born August 15, 1990) is an American actress. The films she has acted in have grossed over $6 billion worldwide, and she was the highest-paid actress in the world in 2015 and 2016. Lawrence appeared in Time’s 100 most influential people in the world list in 2013 and in the Forbes Celebrity 100 list in 2014 and 2016.

During her childhood, Lawrence performed in church plays and school musicals. At age 14, she was spotted by a talent scout while vacationing in New York City with her family. Lawrence then moved to Los Angeles and began her acting career by playing guest roles in television shows. Her first major role came as a main cast member on the sitcom The Bill Engvall Show (2007–2009). Lawrence made her film debut in a supporting role in the drama Garden Party (2008), and had her breakthrough playing a poverty-stricken teenager in the independent drama Winter’s Bone (2010). Her career progressed with her starring roles as the mutant Mystique in the X-Men film series (2011–2019) and Katniss Everdeen in the Hunger Games film series (2012–2015). The latter established her as the highest-grossing action heroine of all time.

Lawrence went on to earn accolades for her collaborations with director David O. Russell. Her performance as a depressed young widow in the romance film Silver Linings Playbook (2012) earned her the Academy Award for Best Actress, making her the second-youngest winner of the award. She subsequently won the BAFTA Award for Best Actress in a Supporting Role for playing a troubled wife in the black comedy American Hustle (2013). Lawrence also received Golden Globe Awards for both of these films, and for portraying Joy Mangano in the biopic Joy (2015). She has since starred in the science fiction romance Passengers (2016), the psychological horror film Mother! (2017), and the spy thriller Red Sparrow (2018).

Lawrence is an outspoken feminist and has advocated for Planned Parenthood. In 2015, she founded the Jennifer Lawrence Foundation, which has advocated for the Boys & Girls Clubs of America and the Special Olympics. She formed the production company Excellent Cadaver in 2018.

Jennifer Shrader Lawrence was born on August 15, 1990 in Indian Hills, Kentucky, to Gary, a construction worker, and Karen (née Koch), a summer camp manager. She has two older brothers, Ben and Blaine, and her mother brought her up to be “tough” like them. Karen did not allow her daughter to play with other girls in preschool as she deemed her “too rough” with them. Lawrence was educated at the Kammerer Middle School in Louisville. She did not enjoy her childhood due to hyperactivity and social anxiety and considered herself a misfit among her peers. Lawrence has said that her anxieties vanished when she performed on stage and that acting gave her a sense of accomplishment.

Lawrence’s school activities included cheerleading, softball, field hockey and basketball, which she played on a boys’ team that was coached by her father. While growing up, she was fond of horseback riding and frequently visited a local horse farm. She has an injured tailbone as a result of being thrown from a horse. When her father worked from home, she performed for him, often dressing up as a clown or ballerina. She had her first acting assignment at age nine when she played the role of a prostitute in a church play that was based on the Book of Jonah. For the next few years, she continued to take parts in church plays and school musicals.

Lawrence was fourteen and on a family vacation in New York City when she was spotted on the street by a talent scout who arranged for her to audition for talent agents. Karen was not keen on allowing her daughter to pursue an acting career, but she briefly moved her family to New York to let her read for roles. After Lawrence’s first cold reading, the agents said that hers was the best they had heard from someone that young; Lawrence’s mother convinced her that they were lying. Lawrence said her early experiences were difficult because she felt lonely and friendless. She signed with CESD Talent Agency, who convinced her parents to let her audition for roles in Los Angeles. While her mother encouraged her to go into modelling, Lawrence insisted on pursuing acting. At that time, she considered acting to be a natural fit for her abilities, and she turned down several offers for modeling assignments. Lawrence dropped out of school at age 14 without receiving a GED or a diploma. She has said that she was “self-educated” and that her career was her priority. Between her acting jobs in the city, she made regular visits to Louisville, where she served as an assistant nurse at her mother’s camp.

While filming X-Men: First Class in 2010, Lawrence began a romantic relationship with her co-star Nicholas Hoult. The couple broke up around the time they wrapped X-Men: Days of Future Past in 2014. Also that year, she was one of the victims of the iCloud leaks of celebrity photos when dozens of self-photographed nude pictures of her were leaked online. Lawrence emphasized that the images were never meant to go public; she called the leak a “sex crime” and a “sexual violation”. She added that viewers of the images should be ashamed of their part in a sexual offense. The actress later stated that her pictures were intended for Hoult, and that unlike other victims of the hack, she did not plan to sue Apple Inc.

In September 2016, she began dating director Darren Aronofsky, whom she met during the filming of mother!. The couple split in November 2017. In 2018, she began dating Cooke Maroney, an art gallery director, and they became engaged in February 2019. In October 2019, she married Maroney in Rhode Island. As of May 2019, she resides in Lower Manhattan, New York City and Beverly Hills, California.