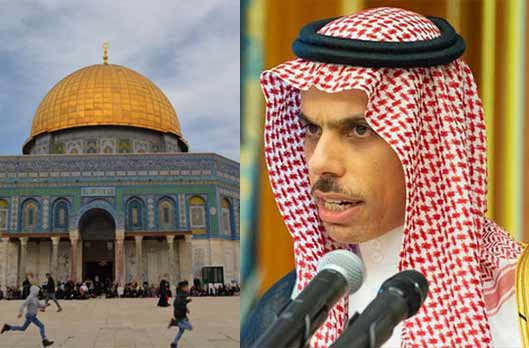 Riyadh: Saudi Arabia has spoken out in favor of the unarmed Palestinians suffering Israeli atrocities, saying that Jerusalem, the land of the Palestinians, will not allow anyone to harm it.

This was stated by Saudi Foreign Minister Prince Faisal bin Farhan while addressing an emergency meeting of the Organization of Cooperation (OIC). He said Israel was openly violating Palestinian rights. Let the international community fulfill its responsibilities.

“We condemn the Israeli occupation of Palestinian homes in Jerusalem,” the Saudi foreign minister told an OIC virtual meeting. Jerusalem is the land of the Palestinians, we will not allow it to be harmed.

On the other hand, Israeli barbarism continues in Gaza. In another attack, 26 more Palestinians were martyred and 50 wounded, bringing the death toll to 181.

Israeli forces also targeted the Al-Jala Tower in Gaza, which housed the offices of several media houses, including Arab TV Al Jazeera. Despite the protests, the Israeli prime minister says the bombing will continue as long as it is needed.