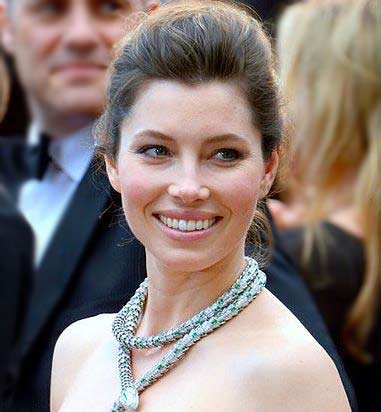 Jessica Claire Timberlake (née Biel /biːl/; born March 3, 1982) is an American actress, model, producer, and singer. Biel began her career as a vocalist appearing in musical productions until she was cast as Mary Camden in the family drama series 7th Heaven (1996–2006), in which she achieved recognition. The series is the longest-running series that aired on The WB channel and the longest-running family drama in television history.

In 2017, she was the executive producer and star of the USA Network limited drama series The Sinner, for which she received nominations for a Golden Globe Award and a Primetime Emmy Award for Outstanding Lead Actress in a Limited Series or Movie.

Jessica Claire Biel was born on March 3, 1982, in Ely, Minnesota, to Kimberly (née Conroe), a homemaker and spiritual healer, and Jonathan Biel, a business consultant and General Electric worker.Her paternal great-grandfather was the son of Hungarian Jewish immigrants, which she discovered on the show Who Do You Think You Are?; she also has German, French, English, and Scandinavian ancestry. Her younger brother, Justin, launched and runs the eco-accessory line BARE. Biel’s family moved frequently during her childhood, living in Texas, Connecticut, and Woodstock, Illinois, before finally settling in Boulder, Colorado. While growing up, Biel played soccer and trained as a level six gymnast. From 2000 to 2002, she attended Tufts University in Medford, Massachusetts.

Biel and 7th Heaven castmate Adam LaVorgna had an offscreen relationship after meeting on set of the film I’ll Be Home for Christmas from 1998-2001. She dated actor Chris Evans off and on from 2001 to 2006.

In January 2007 Biel began dating singer and actor Justin Timberlake. They became engaged in December 2011[59] and married on October 19, 2012, at the Borgo Egnazia resort in Fasano, Italy. Biel and Timberlake have one son, Silas Timberlake, born on April 11, 2015.

On July 18, 2006, Biel participated in a charity auction to raise medical funds for teen Molly Bloom who was injured in a limousine accident. “I promise I’m a cheap date”, Biel quipped in a pre-recorded video. John Schiffner of Fergus Falls, Minnesota, successfully bid $30,000 to have lunch with Biel. Biel and Schiffner lunched at The Palm restaurant in Denver, Colorado, on August 18, 2006. In early 2007 Biel co-founded the Make the Difference Network with her father and another business partner, Kent McBride. In 2010 Biel climbed to the summit of Mount Kilimanjaro with members of the United Nations Foundation to raise awareness of the global water crisis. That same year Biel earned a nomination for a Do Something Award. Biel teamed with nonprofit health care organization WomanCare Global to develop content that will provide girls with sexual education.