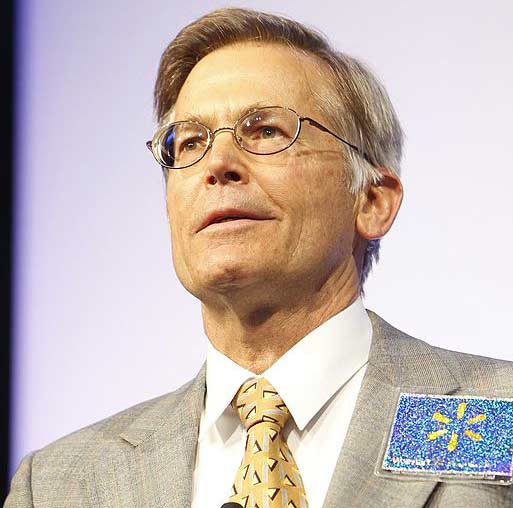 James Carr Walton (born June 7, 1948) is an American businessman, currently the heir to the fortune of Walmart, the world’s largest retailer. As of January 2021, Walton was the 8th-richest person in the world, with a net worth of US$68.2 billion. He is the youngest son of Sam Walton.

After graduating from Bentonville High School in 1965 where he was president of his junior class, played football at all-state level and also learned to fly a plane, Walton received a bachelor’s degree in Business Administration in Marketing from the University of Arkansas in Fayetteville, Arkansas in 1971, where he was also a member of the Lambda Chi Alpha fraternity. In 1972, he joined Walmart and was involved in its real-estate dealings. After serving for four years, he moved to the family owned Walton Enterprises as president in 1975.

On September 28, 2005, Walton replaced his deceased brother, John, on the Wal-Mart Board of Directors. He is currently on the Strategic Planning and Finance committees. He was CEO of his family owned Arvest Bank, until becoming Chairman of Arvest Bank, and Chairman of newspaper firm Community Publishers Inc. (CPI) owned by Jim Walton himself (but founded by his father Sam Walton after acquiring the local newspaper the Benton County Daily Record, both operating in Arkansas, Missouri, and Oklahoma). He has pledged about $2 billion to the Walton Family Foundation along with his siblings from 2008 to 2013.

On October 15, 2015, The Baton Rouge Advocate in the capital city of Baton Rouge, Louisiana, reported that PAC-Empower Louisiana had allocated about $818,000 to candidates running for the Louisiana Board of Elementary and Secondary Education who support the Common Core State Standards Initiative. The political action committee members include Alice and Jim Walton, Eli Broad of Los Angeles, California, and the trade association, the Louisiana Association of Business and Industry.

Four candidates in eight districts, including Sandy Holloway, James Garvey in District 1 (suburban New Orleans), and Holly Boffy were declared “acceptable” to the PAC. Holloway collected $87,696; Garvey, the board vice president, $230,459; Boffy, another incumbent from Lafayette, $107,145. The Common Core candidates staged major victories in the primary election held on October 24, 2015.

In September 2016, Walton was reported to own over 152 million of Walmart shares worth over $11 billion (US).