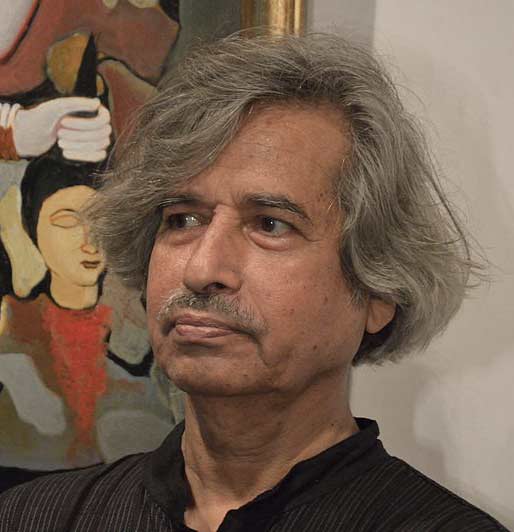 Jogen Chowdhury (born 16 February 1939) is an eminent Indian painter and considered an important painter of 21st century India. He lives and works in Santiniketan. He graduated from the Government College of Art & Craft, Kolkata and subsequently at École nationale supérieure des Beaux-Arts, Paris in 1967. He has immense contribution in inspiring young artists of India. Jogen Chowdhury had developed his individual style after his return from Paris. His most famous paintings are in ink, water colour and pastel. He has painted in oil medium as well.

Lines and its tactile characteristic to enhance colours is an important material in Indian Art for ages. Jogen Chowdhury himself is a master of lines and he has mastered to make the curves depict the character of his figures. By careful distortion of the form he imparts the air of caricature in his figures, figures of men and women. The figure is always the most important and conveys all the artist has to express. Colour, he uses though, is to provide matter into the form. R. Siva Kumar has lucidly described Jogen’s works in the following excerpt:”The pulse and rhythm of Jogen Chowdhury’s art comes from a filial affinity to nature and milieu. In Chowdhury’s more recent works the sensory experiences of cloth, bolsters, sofas and the human body are cross-projected to produce an uncanny world of tran-substantiated tumescence and flaccidness. Mnemic displacements and personal associations add to the symbolic ambivalence of his motifs, making his images come closer to inexplicable experiences than to explicit signs. In the postures of some figures we feel an animal sentience, in the ripe anatomy of others we savour a fruity succulence. The figures are wrought by a combination of decorative wilfulness and expressive distortion and are imbued with an effusive sensuality. Chowdhury’s art is rich in suggestions; it is to be apprehended without bracketing our fund of knowledge, experience or memories, but also cannot be narrativised without trivialising it, without depleting its sensory particularities.”

Jogen was born in Daharpara Village, a village in the Faridpur district of Bangladesh in 1939. His father Pramatha Nath Chowdhury was a Brahmin zamindar. Jogen received an interest in art from his parents as both his parents were artists. Pramatha Nath was interested in Hindu mythological incidents and characters. He had painted several mythological scenes from the village theatres. He had also sculpted various Hindu deities. Jogen’s mother was an expert in Alpana drawings.

Jogen Chowdhury was born and brought up in the village culture and atmosphere. Just before partition Jogen along with his father came to Calcutta; the rest of the family moved to Calcutta in 1948, after the partition. The family stayed at his uncle’s quarter. Here Jogen painted his first painting, on the wall.

Jogen was admitted to the Government College of Art & Craft, Kolkata in 1955 wherefrom he graduated by 1960. His first job was as an art teacher in Howrah Zilla School. After two years in 1962, he was employed as Designer in the Handloom Board, Calcutta.

In 1965, he went to Paris to study in Ecole des Beaux-Arts, in William Hayter’s Atelier 17. Afterward, he spent five months in London.

He returned to India in early 1968. He was appointed as a textile designer in the Handloom Board in Chennai. In 1970, he joined the Calcutta Painters Group. His first collection of poems Hridoy Train Beje Other was also published in the same year.

He quit his job at the Madras Handloom Board in 1972 to join the Art Gallery of Rashtrapati Bhavan, New Delhi as a Curator. Due to this new job, he moved to New Delhi. He founded the Gallery 26 and Artists’ Forum in New Delhi in 1975 along with some leading painters of New Delhi. In 1986, Jogen represented India in the ‘Festival of Art’ in Baghdadwi.

In 1987, Jogen Chowdhury joined Kala Bhavan, Santiniketan as a professor of painting. Besides his numerous paintings, exhibitions, he has written extensively on contemporary art. He was also appointed as Juror in several exhibitions.