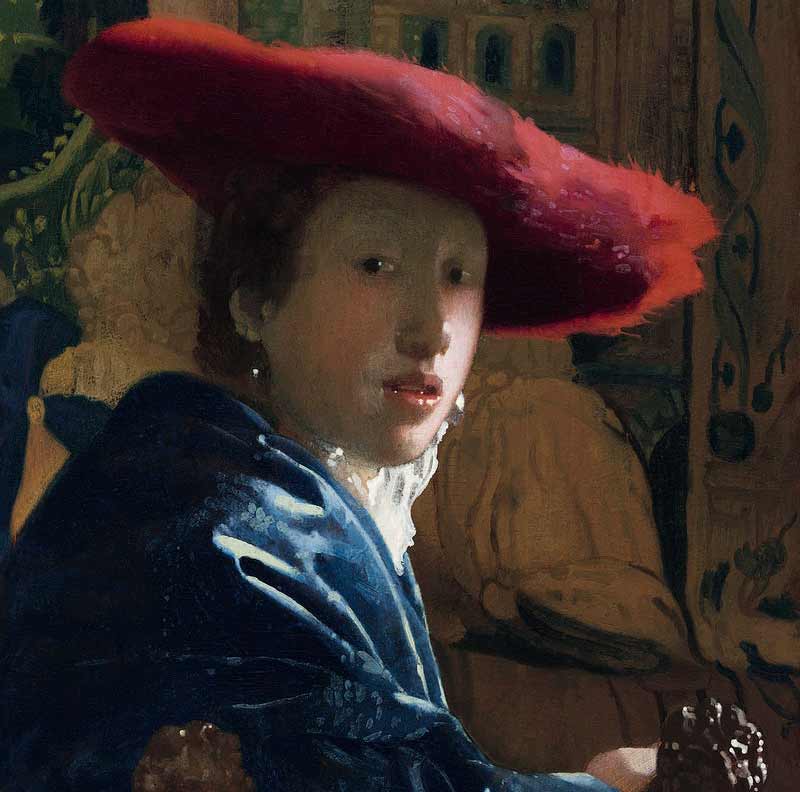 On view: Rijksmuseum, The Metropolitan Museum of Art

Johannes Vermeer (October 1632 – December 1675), in original Dutch Jan Vermeer van Delft, was a Dutch Baroque Period painter who specialized in domestic interior scenes of middle class life. During his lifetime, he was a moderately successful provincial genre painter, recognized in Delft and The Hague. Nonetheless, he produced relatively few paintings and evidently was not wealthy, leaving his wife and children in debt at his death.

Vermeer worked slowly and with great care, and frequently used very expensive pigments. He is particularly renowned for his masterly treatment and use of light in his work.

“Almost all his paintings,” Hans Koningsberger wrote, “are apparently set in two smallish rooms in his house in Delft; they show the same furniture and decorations in various arrangements and they often portray the same people, mostly women.”

His modest celebrity gave way to obscurity after his death. He was barely mentioned in Arnold Houbraken’s major source book on 17th-century Dutch painting (Grand Theatre of Dutch Painters and Women Artists) and was thus omitted from subsequent surveys of Dutch art for nearly two centuries. In the 19th century, Vermeer was rediscovered by Gustav Friedrich Waagen and Théophile Thoré-Bürger, who published an essay attributing 66 pictures to him, although only 34 paintings are universally attributed to him today. Since that time, Vermeer’s reputation has grown, and he is now acknowledged as one of the greatest painters of the Dutch Golden Age.

Similar to other major Dutch Golden Age artists such as Frans Hals and Rembrandt, Vermeer never went abroad. Also, like Rembrandt, he was an avid art collector and dealer.

Relatively little was known about Vermeer’s life until recently. He seems to have been devoted exclusively to his art, living out his life in the city of Delft. Until the 19th century, the only sources of information were some registers, a few official documents, and comments by other artists; for this reason, Thoré-Bürger named him “The Sphinx of Delft”. John Michael Montias added details on the family from the city archives of Delft in his Artists and Artisans in Delft: A Socio-Economic Study of the Seventeenth Century (1982).

Johannes Vermeer was baptized within the Reformed Church on 31 October 1632. His father, named Reijnier Janszoon, was a middle-class worker of silk or caffa (a mixture of silk and cotton or wool). As an apprentice in Amsterdam, Reijnier lived on fashionable Sint Antoniesbreestraat, a street with many resident painters at the time. In 1615, Reijnier married Digna Baltus. The couple moved to Delft and had a daughter named Gertruy who was baptized in 1620. In 1625, Reijnier was involved in a fight with a soldier named Willem van Bylandt who died from his wounds five months later. Around this time, Reijnier began dealing in paintings. In 1631, he leased an inn, which he called “The Flying Fox”. In 1635, he lived on Voldersgracht 25 or 26. In 1641, he bought a larger inn on the market square, named after the Flemish town “Mechelen”. The acquisition of the inn constituted a considerable financial burden.[Huerta 1] When Reijnier died in October 1652, Vermeer took over the operation of the family’s art business.

In April 1653, Johannes Reijniersz Vermeer married a Catholic woman, Catharina Bolenes (Bolnes). The blessing took place in the quiet nearby village of Schipluiden. Vermeer’s new mother-in-law Maria Thins was significantly wealthier than he, and it was probably she who insisted that Vermeer convert to Catholicism before the marriage on 5 April. According to art historian Walter Liedtke, Vermeer’s conversion seems to have been made with conviction. His painting The Allegory of Faith, made between 1670 and 1672, placed less emphasis on the artists’ usual naturalistic concerns and more on symbolic religious applications, including the sacrament of the Eucharist. Walter Liedtke in Dutch Paintings in the Metropolitan Museum of Art suggests that it was made for a learned and devout Catholic patron, perhaps for his schuilkerk, or “hidden church”. At some point, the couple moved in with Catharina’s mother, who lived in a rather spacious house at Oude Langendijk, almost next to a hidden Jesuit church. Here Vermeer lived for the rest of his life, producing paintings in the front room on the second floor. His wife gave birth to 15 children, four of whom were buried before being baptized, but were registered as “child of Johan Vermeer”. The names of 10 of Vermeer’s children are known from wills written by relatives: Maertge, Elisabeth, Cornelia, Aleydis, Beatrix, Johannes, Gertruyd, Franciscus, Catharina, and Ignatius. Several of these names carry a religious connotation, and the youngest (Ignatius) was likely named after the founder of the Jesuit order.

Originally, Vermeer’s works were largely overlooked by art historians for two centuries after his death. A select number of connoisseurs in the Netherlands did appreciate his work, yet even so, many of his works were attributed to better-known artists such as Metsu or Mieris. The Delft master’s modern rediscovery began about 1860, when German museum director Gustav Waagen saw The Art of Painting in the Czernin gallery in Vienna and recognized the work as a Vermeer, though it was attributed to Pieter de Hooch at that time. Research by Théophile Thoré-Bürger culminated in the publication of his catalogue raisonné of Vermeer’s works in the Gazette des Beaux-Arts in 1866. Thoré-Bürger’s catalogue drew international attention to Vermeer and listed more than 70 works by him, including many that he regarded as uncertain. The accepted number of Vermeer’s paintings today is 34.

Upon the rediscovery of Vermeer’s work, several prominent Dutch artists modelled their style on his work, including Simon Duiker. Other artists who were inspired by Vermeer include Danish painter Wilhelm Hammershoi and American Thomas Wilmer Dewing. In the 20th century, Vermeer’s admirers included Salvador Dalí, who painted his own version of The Lacemaker (on commission from collector Robert Lehman) and pitted large copies of the original against a rhinoceros in some surrealist experiments. Dali also immortalized the Dutch Master in The Ghost of Vermeer of Delft Which Can Be Used As a Table, 1934.

Han van Meegeren was a 20th-century Dutch painter who worked in the classical tradition. He became a master forger, motivated by a blend of aesthetic and financial reasons, creating and selling many new “Vermeers” before turning himself in for forgery to avoid being charged with capital treason for collaboration with the Nazis, specifically, in selling what had been believed to be original artwork to the Nazis.

On the evening of 23 September 1971, a 21-year-old hotel waiter, Mario Pierre Roymans, stole Vermeer’s Love Letter from the Fine Arts Palace in Brussels where it was on loan from the Rijksmuseum as a part of the Rembrandt and his Age exhibition.