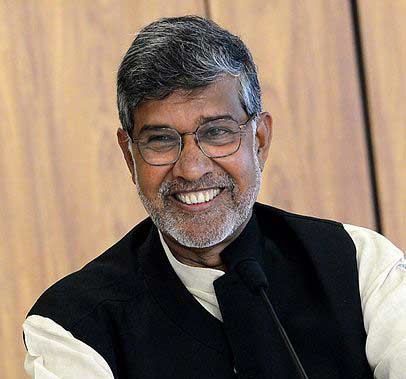 Kailash Satyarthi (born 11 January 1954) is an Indian social reformer who campaigned against child labour in India and advocated the universal right to education. In 2014, he was the co-recipient of the Nobel Peace Prize, along with Malala Yousafzai, “for their struggle against the suppression of children and young people and for the right of all children to education.” He is the founder of multiple social activist organizations, including Bachpan Bachao Andolan, Global March Against Child Labour, Global Campaign for Education and Kailash Satyarthi Children’s Foundation.

Kailash Satyarthi and his team at Bachpan Bachao Andolan have liberated more than 81,000 children in India from child labour, slavery and trafficking. In 1998, Satyarthi conceived and led the Global March against Child Labour, an 80,000 km (ca. 49,710 mi)-long march across 103 countries to put forth a global demand against worst forms of child labour. This became one of the largest social movements ever on behalf of exploited children. The demands of the marchers, which included children and youth (particularly the survivors of trafficking for forced labour, exploitation, sexual abuse, illegal organ transplants, armed conflict, etc.) were reflected in the draft of the ILO Convention 192 on the Worst Forms of Child Labour. The following year, the Convention was unanimously adopted at the ILO Conference in Geneva.

He has served on the board and committee of several international organisations including the Center for Victims of Torture (USA), the International Labor Rights Fund (USA), and the Cocoa Initiative. Satyarthi was among Fortune magazine’s “World’s Greatest Leaders” in 2015 and featured in LinkedIn’s Power Profiles List in 2017 and 2018. Satyarthi led a nationwide march, Bharat Yatra, in India covering 19,000 km (12,000 mi) in 35 days, to demand for legislation against child rape, child sexual abuse and trafficking.

He lives in New Delhi, India. His family includes his wife, a son, daughter-in-law, a grandson, daughter and a son-in-law.

Satyarthi was born in Vidisha, a small town in the Indian state of Madhya Pradesh into a middle-class Hindu family. He is the youngest among four brothers and a sister. His father was a retired police head constable and his mother was an uneducated housewife with high morals. As per Satyarthi, this exceptionally idealistic and helpful nature of his mother had a big impact on him. He was raised in a locality (mohalla) where Hindus and Muslims lived with each other. As a four-year-old toddler, he learned to read Urdu from the Maulvi at the neighboring mosque and learned Hindi and English in school.

Satyarthi was significantly affected by the lack of school access for all children and his experiences with poverty in his youth. He made efforts when young to try to change these inequalities due to the circumstances of their birth.

Satyarthi completed his education in Vidisha. He attended Government Boys Higher Secondary School in Vidisha, and completed a undergraduate degree in electrical engineering at Samrat Ashok Technological Institute in Vidisha [then affiliated to the University of Bhopal, (now Barkatullah University)] and a post-graduate degree in high-voltage engineering. Satyarthi joined his college as a lecturer for a few years.

In 1980, Sathyarthi gave up his career as an electrical engineer and then founded the Bachpan Bachao Andolan (Save Childhood Movement). He conceived and led the Global March Against Child Labor and its international advocacy body, the International Center on Child Labor and Education (ICCLE), which are worldwide coalitions of NGOs, teachers and trades unionists. He has served as the President of the Global Campaign for Education from its inception in 1999 to 2011. Sathyarthi is one of its four founders alongside ActionAid, Oxfam and Education International.

In 1998 Satyarthi conceived and led the Global March against Child Labour traversing across 103 countries covering 80,000 km to demand an International Law on Worst Forms of Child Labour. The march eventually led to the adoption of ILO Convention No. 182 on the worst forms of child labour.

He established GoodWeave International (formerly known as Rugmark) as the first voluntary labelling, monitoring and certification system of rugs manufactured without the use of child-labour in South Asia. In the late 1980s and early 1990s he focused its campaigns on raising consumer awareness on issues relating to the accountability of global corporations regarding socially responsible consumerism, trade and supply chains. Satyarthi has highlighted child labour as a human rights issue as well as a welfare matter and charitable cause. He has argued that it perpetuates poverty, unemployment, illiteracy, population growth, and other social problems, his claims have been supported by several studies. He has had a role in linking the movement against child labour with efforts for achieving “Education for All”. Satyarthi has been a member of a UNESCO body and has been on the board of the Fast Track Initiative (now known as the Global Partnership for Education). Satyarthi had served on the board and committee of several international organisations including the Center for Victims of Torture (USA), the International Labor Rights Fund (USA), and the International Cocoa Foundation. He brought child labour and slavery into the post-2015 development agenda for the United Nation’s Sustainable Development Goals.

Satyarthi was awarded the Nobel Peace Prize in 2014 “for the struggle against the suppression of children and young people and for the right of all children to education”. Satyarthi is the first natural-born Indian Nobel Peace Laureate.

Satyarthi has been the subject of documentaries, television series, talk shows, advocacy and awareness films. In September 2017 India Times listed Satyarthi as one of the 11 Human Rights Activists Whose Life Mission Is To Provide Others with a Dignified Life Satyarthi has been awarded the following honours: