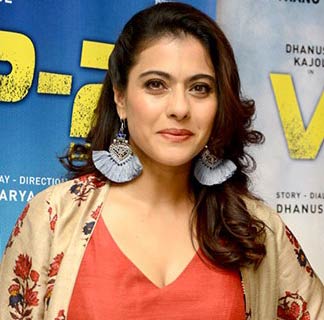 Kajol (born Kajol Mukherjee; 5 August 1974), also known by her married name Kajol Devgan, is an Indian film actress, who predominantly works in Hindi cinema. Born into the Mukherjee-Samarth family, she is the daughter of actress Tanuja Samarth and filmmaker Shomu Mukherjee. She is the recipient of numerous accolades, including six Filmfare Awards, and alongside her aunt Nutan, she holds the record for most Best Actress wins at the ceremony, with five. In 2011, the Government of India awarded her with Padma Shri, the fourth highest civilian honour of the country.

After making her film debut through the drama Bekhudi (1992), Kajol had her first commercial success with the thriller Baazigar (1993) and breakthrough with the romance Yeh Dillagi (1994). She went on to establish herself with starring roles opposite Shah Rukh Khan in the top-grossing romantic films Dilwale Dulhania Le Jayenge (1995), Kuch Kuch Hota Hai (1998), and Kabhi Khushi Kabhie Gham… (2001). She won the Filmfare Award for Best Actress for each of these films and for her roles as a blind Kashmiri woman in Fanaa (2006) and a single mother in My Name Is Khan (2010). Her other notable films include the thrillers Gupt: The Hidden Truth (1997) and Dushman (1998), and the romantic dramas Ishq (1997), Pyaar Kiya To Darna Kya (1998), Pyaar To Hona Hi Tha (1998) and Hum Aapke Dil Mein Rehte Hain (1999). Her highest-grossing releases came with the action comedy Dilwale (2015) and the period drama Tanhaji (2020).

In addition to acting in films, Kajol is a social activist and is noted for her work with widows and children, for which she received the Karmaveer Puraskaar in 2008. She has featured as a talent judge for Zee TV’s reality show Rock-N-Roll Family and holds a managerial position at Devgn Entertainment and Software Ltd. Kajol has been married to actor Ajay Devgn since 1999, with whom she has two children.

Kajol was born in Bombay (Mumbai) to the Mukherjee-Samarth film family of Bengali-Marathi descent. Her mother, Tanuja, is an actress, while her father Shomu Mukherjee was a film director and producer. Shomu died in 2008 after suffering cardiac arrest. Her younger sister, Tanishaa is also an actress. Her maternal aunt was actress Nutan and her maternal grandmother, Shobhna Samarth, and great grandmother, Rattan Bai, were both involved in Hindi cinema. Her paternal uncles, Joy Mukherjee and Deb Mukherjee, are film producers, while her paternal and maternal grandfathers, Sashadhar Mukherjee and Kumarsen Samarth, were filmmakers. Kajol’s cousins Rani Mukerji, Sharbani Mukherjee and Mohnish Behl are also Bollywood actors; whereas another cousin of hers, Ayan Mukerji is a director.

Kajol describes herself as being “extremely mischievous” as a child. She added that she was very stubborn and impulsive from a very young age. Her parents separated when she was young; but according to Tanuja, Kajol was not affected by the split as “we never argued in front of [her]”. In the absence of her mother, Kajol was looked after by her maternal grandmother, who “never let me feel that my mother was away and working”. According to Kajol, her mother inculcated a sense of independence in her at a very young age. Growing up between two separate cultures, she inherited her “Maharashtrian pragmatism” from her mother and her “Bengali temperament” from her father.

Kajol was educated at a boarding school named, St. Joseph’s Convent School, Panchgani. Apart from her studies, she participated in extra-curricular activities, such as dancing. It was in school that she began to form an active interest in reading fiction, as it helped her “through the bad moments” in her life. At the age of sixteen, she began work on Rahul Rawail’s film Bekhudi, which according to her was a “big dose of luck”. She initially intended to return to school after shooting for the film during her summer vacations. However, she eventually dropped out of school to pursue a full-time career in film. On not completing her education, she quoted, “I don’t think I am any less well-rounded because I didn’t complete school”.

Kajol began dating fellow actor, Ajay Devgan, in 1994, while filming for Gundaraj. Members of the media, however, labelled them as an “unlikely pair” due to their contrasting personalities. Devgan explained their relationship by saying, “We never resorted to the usual ‘I Love you’ routine. A proposal never happened. We grew with each other. Marriage was never discussed, but it was always imminent”. They subsequently got married on 24 February 1999 in a traditional Maharashtrian style ceremony at the Devgan house. The wedding was subject to wide media scrutiny, as certain members of the media criticised Kajol’s decision to settle down at the “peak of her career”. Kajol, however, maintained that she would not quit films, but would cut down on the amount of work that she did.

Following her marriage, Kajol moved in with Devgan and his parents at the latter’s ancestral house in Juhu. While media members speculated about a lack of compatibility between her in-laws and her, Kajol clarified that they were “like parents to me” and encouraged her to continue working in films. Tabloids have often romantically linked Devgn with other Bollywood actresses, and have reported about an imminent divorce. Refuting the rumors, Kajol stated, “I don’t believe in those rumors because I know the way this industry functions. […] You cannot continue a marriage without basic trust. Frankly, I don’t care for such talk.”

In 2001, Kajol was pregnant with her first child. However, due to an ectopic pregnancy, she suffered from a miscarriage. On 20 April 2003, Kajol gave birth to a daughter, Nysa. Seven years later, on 13 September 2010, she gave birth to a son, Yug. She described motherhood as “fab” and added that her kids brought out “the best in her”.

Kajol has received six Filmfare Awards, including five Best Actress awards for Dilwale Dulhania Le Jayenge (1995), Kuch Kuch Hota Hai (1998), Kabhi Khushi Kabhie Gham… (2001), Fanaa (2006) and My Name Is Khan (2010), and a Best Villain award (also known as Filmfare Award for Best Performance In a Negative Role) for Gupt: The Hidden Truth (1997). In 2011, she was awarded Padma Shri, the fourth-highest Indian civilian award, by the Government of India for her contributions to the arts.