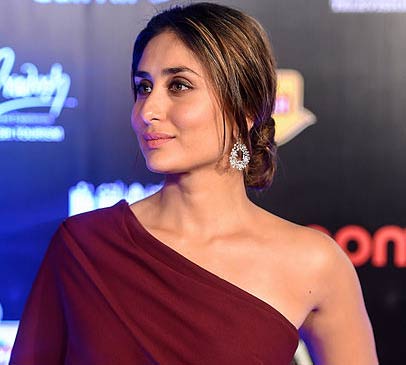 Kareena Kapoor Khan (pronounced [kəˈriːnaː kəˈpuːr]; born 21 September 1980) is an Indian actress who appears in Hindi films. She is the daughter of actors Randhir Kapoor and Babita, and the younger sister of actress Karisma Kapoor. Noted for playing a variety of characters in a range of film genres—from romantic comedies to crime dramas—Kapoor is the recipient of several awards, including six Filmfare Awards, and is one of Bollywood’s most popular and highest-paid actresses.

After making her acting debut in the 2000 war film Refugee, Kapoor established herself with roles in the historical drama Aśoka and the melodrama Kabhi Khushi Kabhie Gham… (both 2001). This initial success was followed by a series of commercial failures and repetitive roles, which garnered her negative reviews. The year 2004 marked a turning point for Kapoor when she played against type in the role of a sex worker in the drama Chameli. She subsequently earned critical recognition for her portrayal of a riot victim in the 2004 drama Dev and a character based on William Shakespeare’s heroine Desdemona in the 2006 crime film Omkara. Further praise came for her performances in the romantic comedy Jab We Met (2007), the thrillers Kurbaan (2009) and Talaash: The Answer Lies Within (2012), and the dramas We Are Family (2010), Heroine (2012) and Udta Punjab (2016). Her highest-grossing releases include the action film Singham Returns (2014), the comedy Good Newwz (2019), and the dramas 3 Idiots (2009), Bodyguard (2011) and Bajrangi Bhaijaan (2015).

Married to actor Saif Ali Khan, with whom she has a son, Kapoor’s off-screen life is the subject of widespread coverage in India. She has a reputation for being outspoken and assertive, and is recognised for her contributions to the film industry through her fashion style and film roles. In addition to film acting, Kapoor participates in stage shows, hosts a radio show and has contributed as a co-writer to three books: an autobiographical memoir and two nutrition guides. She has started her own line of clothing and cosmetics for women, and has worked with UNICEF since 2014 to advocate for the education of girls and an increase in quality based education in India.

Pictured with mother Babita (left) and sister Karisma. In an interview with journalist Vir Sanghvi, Kapoor stated that growing up with the two of them helped her become strong and independent.

Born on 21 September 1980 in Bombay (now Mumbai), Kapoor (often informally referred to as ‘Bebo’) is the younger daughter of Randhir Kapoor and Babita (née Shivdasani); her elder sister Karisma is also an actress. She is the paternal granddaughter of actor and filmmaker Raj Kapoor, maternal granddaughter of actor Hari Shivdasani, and niece of actor Rishi Kapoor. According to Kapoor, the name “Kareena” was derived from the book Anna Karenina, which her mother read while she was pregnant with her. She is of Punjabi descent on her father’s side, and on her mother’s side she is of Sindhi and British descent.

Describing herself as a “very naughty [and] spoilt child”, Kapoor’s exposure to films from a young age kindled her interest in acting; she was particularly inspired by the work of actresses Nargis and Meena Kumari. Despite her family background, her father disapproved of women entering films because he believed it conflicted with the traditional maternal duties and responsibility of women in the family. This led to a conflict between her parents, and they separated. She was then raised by her mother, who worked several jobs to support her daughters until Karisma debuted as an actress in 1991. After living separately for several years, her parents reconciled in October 2007. Kapoor remarked, “My father is also an important factor in my life […] [Al]though we did not see him often in our initial years, we are a family now.”
Kapoor attended Jamnabai Narsee School in Mumbai, followed by Welham Girls’ School in Dehradun. She attended the institution primarily to satisfy her mother, though later admitted to liking the experience. According to Kapoor, she wasn’t inclined towards academics though received good grades in all her classes except mathematics. Upon graduating from Welham, she returned to Mumbai and studied commerce for two years at Mithibai College. Kapoor then registered for a three-month summer course in microcomputers at Harvard Summer School in the United States. She later developed an interest in law, and enrolled at the Government Law College, Mumbai; during this period, she developed a long-lasting passion for reading. However, after completing her first year, she decided to pursue her interest in acting, though she later regretted not having completed her education. She began training at an acting institute in Mumbai mentored by Kishore Namit Kapoor, a member of the Film and Television Institute of India (FTII).

Kapoor has received six Filmfare Awards out of ten nominations. For her role in Refugee, Kapoor was awarded the Best Female Debut in 2000. She earned a special jury recognition for Chameli (2003), and two Critics Award for Best Actress for Dev (2004) and Omkara (2006). Kapoor later received the Best Actress and Best Supporting Actress for Jab We Met (2007) and We Are Family (2010) respectively.