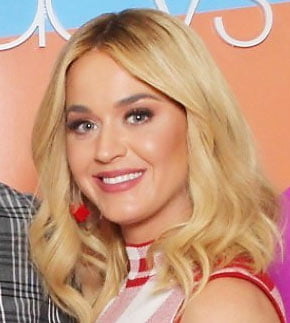 Katheryn Elizabeth Hudson (born October 25, 1984), known professionally as Katy Perry, is an American singer, songwriter, and television judge. After singing in church during her childhood, she pursued a career in gospel music as a teenager. Perry signed with Red Hill Records and released her debut studio album Katy Hudson under her birth name in 2001, which was commercially unsuccessful. She moved to Los Angeles the following year to venture into secular music after Red Hill ceased operations and she subsequently began working with producers Glen Ballard, Dr. Luke, and Max Martin. After adopting the stage name Katy Perry and being dropped by The Island Def Jam Music Group and Columbia Records, she signed a recording contract with Capitol Records in April 2007.

Perry rose to fame in 2008 with her second album, One of the Boys, a pop rock record containing the controversial U.S number one song “I Kissed a Girl” and “Hot n Cold”. All subsequent albums have topped the U.S. Billboard 200. The disco-influenced Teenage Dream (2010) spawned five chart topping U.S. Billboard Hot 100 singles–”California Gurls”, “Teenage Dream”, “Firework”, “E.T.”, and “Last Friday Night (T.G.I.F.)” — a record tying her with Michael Jackson’s Bad. Its follow-up record Prism (2013) was inspired by her divorce and incorporates pop and dance along with themes of self-reflection, everyday life, and relationships. With the music videos for its chart-topping songs “Roar” and “Dark Horse”, Perry became the first artist to have multiple videos reach one billion views on Vevo. 2017’s electropop Witness featured a political subtext and a theme of liberation. The album’s lead single “Chained to the Rhythm” broke Spotify’s record at the time for most first-day streams for a song by a female artist. Her sixth studio album Smile will follow on August 28, 2020.

Perry has nine U.S. Billboard Hot 100 number one singles and has received various awards, including four Guinness World Records, five Billboard Music Awards, five American Music Awards, a Brit Award, and a Juno Award. She has been included in the annual Forbes lists of highest-earning women in music from 2011–2019. Her estimated net worth as of 2016 is $125 million. She is one of the world’s best-selling music artists, having sold over 18 million albums and 125 million singles worldwide. In film, she released an autobiographical documentary titled Katy Perry: Part of Me in 2012, and voiced Smurfette in the 2011 film The Smurfs and its sequel in 2013. Her Super Bowl XLIX halftime show performance is the most watched in history. Perry also began serving as a judge on American Idol in 2018.

Katheryn Elizabeth Hudson was born in Santa Barbara, California, to Pentecostal pastors Mary Christine (née Perry) and Maurice Keith Hudson. Her parents are born again Christians, each having turned to religion after a “wild youth”. Perry has English, German, Irish, and Portuguese ancestry. Through her mother, she is a niece of film director Frank Perry. She has a younger brother named David, who is a singer, and an older sister, Angela.

From ages 3 to 11, Perry often moved across the country as her parents set up churches before settling again in Santa Barbara. Growing up, she attended religious schools and camps, including Paradise Valley Christian School in Arizona and Santa Barbara Christian School in California during her elementary years. Her family struggled financially, sometimes using food stamps and eating from the food bank intended to feed the congregation at her parents’ church.

Growing up, Perry and her siblings were not allowed to eat the cereal Lucky Charms as the word “luck” reminded their mother of Lucifer, and had to call deviled eggs “angeled eggs”. Perry primarily listened to gospel music, as secular music was generally discouraged in the family’s home. She discovered popular music through CDs she sneaked from her friends. While not strictly identifying as religious, Perry has stated, “I pray all the time – for self-control, for humility.” Wanting to be like her sister Angela, Perry began singing by practicing with her sister’s cassette tapes. She performed the tracks in front of their parents, who let her take vocal lessons as Angela was at the time. She began training at age 9, and was incorporated into her parents’ ministry, singing in church from ages 9 to 17. At 13, Perry was given her first guitar for her birthday, and publicly performed songs she wrote. She tried to “be a bit like the typical Californian girl” while growing up, and started rollerskating, skateboarding, and surfing as a teenager. Perry’s brother David described her as a tomboy during her adolescence. She took dancing lessons and learned how to swing, Lindy Hop, and jitterbug.

Throughout her career, Perry has won five American Music Awards, fourteen People’s Choice Awards, four Guinness World Records, a Brit Award, and a Juno Award. In September 2012, Billboard dubbed her the “Woman of the Year”. From May 2010 to September 2011, the singer spent a record-breaking total of 69 consecutive weeks in the top ten of the Billboard Hot 100. Teenage Dream became the first album by a female artist to produce five number-one Billboard Hot 100 singles, and the second album overall after Michael Jackson’s Bad. In the United States, she has accumulated a total of nine number-one singles on the Billboard Hot 100, her most recent being “Dark Horse”, and holds the record for having 18 consecutive number-one songs on the Billboard Dance Club Songs chart.

Perry was declared the Top Global Female Recording Artist of 2013 by the International Federation of the Phonographic Industry (IFPI). According to Recording Industry Association of America (RIAA), she is the fifth top digital singles artist in the United States, with 103 million certified song units in the country including on-demand streams and also has 6 million certified album units, totaling 109 million certified units in the nation. She also became the first artist to have three songs receive Diamond certifications from the RIAA with “Dark Horse”, “Firework”, and “Roar”. All three of them and “E.T.”, “California Gurls”, and “Hot n Cold” have each sold over 5 million digital copies. Throughout her career, Perry has sold more than 18 million albums and 125 million singles globally, making her one of the best-selling music artists of all time.