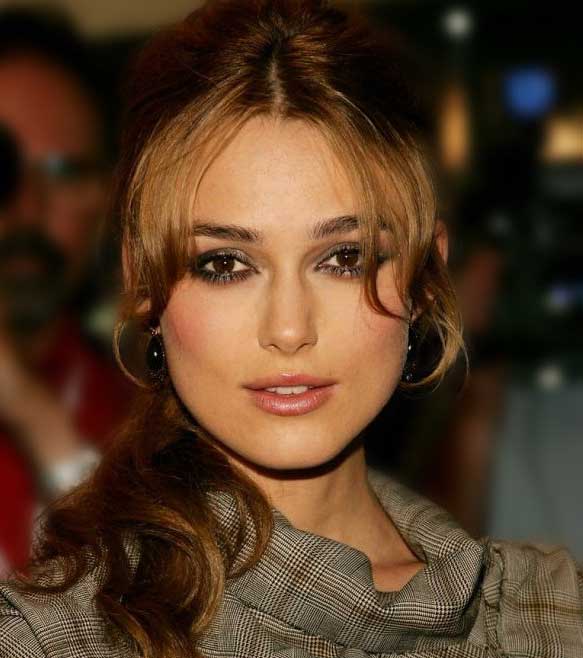 Knightley began acting as a child on television and made her feature film debut in 1995, before making her breakthrough with the 2002 film Bend It Like Beckham. She then starred in the 2003 fantasy swashbuckler film Pirates of the Caribbean, playing Elizabeth Swann, a role that she would reprise in the subsequent films of the franchise. A significant turning point came in her career when Knightley received a nomination for the Academy Award for Best Actress for starring as Elizabeth Bennet in Pride & Prejudice (2005). She became known for starring in several other period dramas, including Atonement (2007), The Duchess (2008), A Dangerous Method (2011), Anna Karenina (2012), and Colette (2018). Knightley received her second nomination for the Academy Award for portraying Joan Clarke in the historical drama The Imitation Game (2014). Her contemporary film roles were in the romantic comedy Begin Again (2013), the action thriller Jack Ryan: Shadow Recruit (2014), the adventure film Everest (2015) and the docudrama Official Secrets (2019).

On stage, Knightley has appeared on the West End in Martin Crimp’s 2009 production of The Misanthrope, which earned her a nomination for a Laurence Olivier Award. She also starred as the eponymous heroine in the 2015 Broadway production of Thérèse Raquin. She was appointed Officer of the Order of the British Empire in the 2018 Birthday Honours for services to drama and charity.

Keira Christina Knightley was born on 26 March 1985, in Teddington, London, to theatre actors Sharman Macdonald and Will Knightley. Her mother is Scottish, her father is English. She was meant to be named “Kiera”, the anglicized form of “Kira”, after Kira Ivanova, whom her father admired. However, Macdonald misspelled the name when she went to register her daughter, writing the “e” before the “i”. Knightley has an elder brother, Caleb. Macdonald also worked as a playwright after her career as an actress came to an end. She introduced her children to theatre and ballet at an early age. This furthered Knightley’s interest in acting, and she requested an agent at the age of three.

Knightley attended Teddington School. At the age of six, she was diagnosed with dyslexia but by the time she was eleven, with her parents’ support, Knightley said, “they deemed me to have got over it sufficiently”. She is still a slow reader and cannot read out loud. Knightley said she was “single-minded about acting” during her childhood. At the age of three, she expressed the desire for an agent like her parents and got one at age six. This led to her taking a number of small parts in TV dramas throughout her childhood. While growing up, Knightley performed in a number of local amateur productions, which included After Juliet, written by her mother, and United States, written by her drama teacher. She focused on art, history, and English literature while studying at the Esher College, but left after a year to pursue an acting career.

Knightley took a break from working in 2006, suggesting that she wanted to take some time off acting to travel and focus on her personal life. Speaking to the press in July 2014, she explained that it felt like she had reached the end of the first stage of her career, and the 2014 film Begin Again was like “it’s beginning again”. Knightley identifies as an atheist.

In 2007, Knightley sued the Daily Mail for publishing an article that speculated as to whether she suffered from anorexia nervosa or some other eating disorder. Knightley won the lawsuit, and was awarded £3,000 in damages. She added to this amount and donated a total of £6,000 to Beat, a charity for those who suffer mental illness and eating disorders.

A 41-year-old man was charged with harassment in February 2010 after trying to contact Knightley on several occasions outside the Comedy Theatre in London, where she appeared in the play The Misanthrope. The subsequent trial folded after she was unavailable to testify in court. Another man was sentenced to eight weeks in prison after harassing Knightley outside her home and stalking her in December 2016.

Knightley began dating actor Del Synnott in 2001, having met him during the filming of Princess of Thieves; they split up in 2003. Knightley then dated model and actor Jamie Dornan from 2003 to 2005. She was in a relationship with her Pride & Prejudice co-star Rupert Friend from 2005 until December 2010.

Knightley has been in a relationship with musician James Righton, of Klaxons, since February 2011. They were married on 4 May 2013, in Mazan, Vaucluse. The couple have two daughters, Edie, born in May 2015, and Delilah, born in September 2019. Knightley advocates equal paternity leave and has spoken about the expense of childcare in England. She said in an interview for the December 2016 issue of Harper’s Bazaar that she had been “lucky to be able to afford really good childcare, because otherwise it would be at least four years out of my career”.

In October 2018, Keira Knightley revealed, while speaking to the Hollywood Reporter, she had a mental breakdown at 22 and was diagnosed with posttraumatic stress disorder as she struggled to adjust to her sudden rise to fame. Knightley described how at one point she did not leave the house for three months. In 2008, Knightley had to have hypnotherapy to prevent panic attacks in order to be able to attend that year’s BAFTAS.