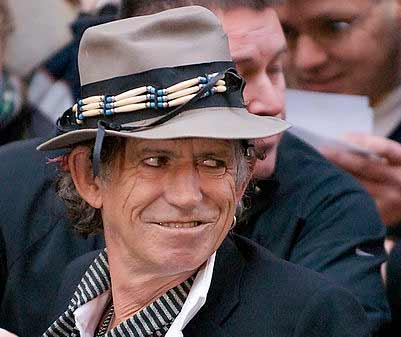 Keith Richards (born 18 December 1943) is an English musician, singer, and songwriter. He is best known as the co-founder, guitarist, secondary vocalist, and co-principal songwriter of the Rolling Stones. Rolling Stone magazine called Richards the creator of “rock’s greatest single body of riffs” on guitar and ranked him fourth on its list of 100 best guitarists in 2011. The magazine lists fourteen songs that Richards wrote with the Rolling Stones’ lead vocalist Mick Jagger on its “Rolling Stone’s 500 Greatest Songs of All Time” list.

Richards plays both lead and rhythm guitar parts, often in the same song, as the Stones are generally known for their guitar interplay of rhythm and lead (“weaving”) between Richards and the other guitarist in the band – Brian Jones (1962–1969), Mick Taylor (1969–1975), and Ronnie Wood (1975–present). In the recording studio, Richards sometimes plays all of the guitar parts, notably on the songs “Paint It Black”, “Ruby Tuesday”, “Sympathy for the Devil”, and “Gimme Shelter”. He is also a vocalist, singing backing vocals on many Rolling Stones songs as well as occasional lead vocals, such as on the Rolling Stones’ 1972 single “Happy”, as well as with his side project, the X-Pensive Winos.

Except for being a musician, Richards also had an extremely short-time career as an actor, being famous for his portrayal of Captain Teague in three films of Pirates of the Caribbean.

Richards was born on 18 December 1943 at Livingston Hospital, in Dartford, Kent, England. He is the only child of Doris Maud Lydia (née Dupree) and Herbert William Richards. His father was a factory worker who was wounded in the Second World War during the Normandy invasion. Richards’s paternal grandparents, Ernie and Eliza Richards, were socialists and civic leaders, whom he credited as “more or less creat[ing] the Walthamstow Labour Party”, and both were mayors of the Municipal Borough of Walthamstow in Essex, with Eliza becoming mayor in 1941. His great-grandfather’s family originated from Wales.

His maternal grandfather, Augustus Theodore “Gus” Dupree, who toured Britain with a jazz big band, Gus Dupree and His Boys, fostered Richards’s interest in the guitar. Richards has said that it was Dupree who gave him his first guitar.[6] His grandfather ‘teased’ the young Richards with a guitar that was on a shelf that Richards couldn’t reach at the time. Finally, Dupree told Richards that if Richards could reach the guitar, he could have it. Richards then devised all manner of ways of reaching the guitar, including putting books and cushions on a chair, until finally getting hold of the instrument, after which his grandfather taught him the rudiments of Richards’s first tune, “Malagueña”. He worked on the number ‘like mad’, and then his grandfather let him keep the guitar, which he called ‘the prize of the century’. Richards played at home, listening to recordings by Billie Holiday, Louis Armstrong, Duke Ellington, and others. His father, on the other hand, disparaged his son’s musical enthusiasm. One of Richards’s first guitar heroes was Elvis’s guitarist Scotty Moore.

Richards attended Wentworth Primary School with Mick Jagger and was his neighbour until 1954 when the Richards family moved. From 1955 to 1959, Richards attended Dartford Technical High School for Boys. Recruited by Dartford Tech’s choirmaster, R. W. “Jake” Clare, he sang in a trio of boy sopranos at, among other occasions, Westminster Abbey for Queen Elizabeth II. In 1959, Richards was expelled from Dartford Tech for truancy and transferred to Sidcup Art College, where he met Dick Taylor. At Sidcup, he was diverted from his studies proper and devoted more time to playing guitar with other students in the boys’ room. At this point, Richards had learned most of Chuck Berry’s solos.

Richards met Jagger on a train as Jagger was heading for classes at the London School of Economics. The mail-order rhythm & blues albums from Chess Records by Chuck Berry and Muddy Waters that Jagger was carrying revealed a mutual interest and led to a renewal of their friendship. Along with mutual friend Dick Taylor, Jagger was singing in an amateur band, Little Boy Blue and the Blue Boys, which Richards soon joined. The Blue Boys folded when Brian Jones, after sharing thoughts on their joint interest in the blues music, invited Mick and Keith to the Bricklayers Arms pub, where they then met Ian Stewart.

By mid-1962 Richards had left Sidcup Art College to devote himself to music and moved into a London flat with Jagger and Jones. His parents divorced about the same time, resulting in his staying close to his mother and remaining estranged from his father until 1982.

After the Rolling Stones signed to Decca Records in 1963, their band manager, Andrew Loog Oldham, dropped the s from Richards’s surname, believing that “Keith Richard”, in his words, “looked more pop”. During the late 1970s, Richards re-established the s in his surname.

Music journalist Nick Kent attached to Richards Lord Byron’s epithet of “mad, bad, and dangerous to know”. Jagger thought that Richards’ image had “contributed to him becoming a junkie”. In 1994, Richards said his image was “like a long shadow … Even though that was nearly twenty years ago, you cannot convince some people that I’m not a mad drug addict.”

Richards’s notoriety for illicit drug use stems in part from several drug busts during the late 1960s and 1970s and his candour about using heroin and other substances. Richards has been tried on drug-related charges five times: in 1967, twice in 1973, in 1977, and in 1978. The first trial – the only one involving a prison sentence – resulted from a February 1967 police raid on Redlands, Richards’s Sussex estate, where he and some friends, including Jagger, were spending the weekend. The subsequent arrest of Richards and Jagger put them on trial before the British courts, whilst also trying them in the court of public opinion. On 29 June 1967, Jagger was sentenced to three months’ imprisonment for possession of four amphetamine tablets. Richards was found guilty of allowing cannabis to be smoked on his property and sentenced to one year in prison. Both Jagger and Richards were imprisoned at that point: Jagger was taken to Brixton Prison in south London, and Richards to Wormwood Scrubs Prison in west London. Both were released on bail the next day pending appeal. On 1 July The Times ran an editorial entitled Who breaks a butterfly upon a wheel?, portraying Jagger’s sentence as persecution, and public sentiment against the convictions increased. A month later the appeals court overturned Richards’s conviction for lack of evidence, and gave Jagger a conditional discharge.

On 27 February 1977, while Richards was staying in a Toronto hotel, then known as the Harbour Castle Hilton on Queen’s Quay East, the Royal Canadian Mounted Police found heroin in his room and charged him with “possession of heroin for the purpose of trafficking” – an offence that at that time could result in prison sentences of seven years to life under the Narcotic Control Act. His passport was confiscated, and Richards and his family remained in Toronto until 1 April, when Richards was allowed to enter the United States on a medical visa for treatment of heroin addiction. The charge against him was later reduced to “simple possession of heroin”.

For the next two years, Richards lived under threat of criminal sanction. Throughout this period he remained active with the Rolling Stones, recording their biggest-selling studio album, Some Girls, and touring North America. Richards was tried in October 1978, pleading guilty to possession of heroin. He was given a suspended sentence and put on probation for one year, with orders to continue treatment for heroin addiction and to perform a benefit concert on behalf of the Canadian National Institute for the Blind after a blind fan testified on his behalf. Although the prosecution had filed an appeal of the sentence, Richards performed two CNIB benefit concerts at Oshawa Civic Auditorium on 22 April 1979; both shows featured the Rolling Stones and the New Barbarians. In September 1979, the Ontario Court of Appeal upheld the original sentence.

In 2016, he stated that he still occasionally drinks alcohol and consumes hashish and cannabis.

Richards was romantically involved with Italian-born actress Anita Pallenberg (d. 13 June 2017), from 1967 to 1979, after which they remained cordial. Together they have a son, Marlon Leon Sundeep (named after the actor Marlon Brando), born in 1969, and a daughter, Angela (originally named Dandelion), born in 1972. Their third child, a son named Tara Jo Jo Gunne—after Richards’s and Pallenberg’s friend, Guinness heir Tara Browne—died aged just over two months, of sudden infant death syndrome (SIDS), on 6 June 1976. Richards was away on tour at the time, something he said has haunted him since. He was criticised at the time for performing that night after learning of the death, but he later said it was the only way he could cope. Before they became romantically linked, Pallenberg had been involved with his fellow Rolling Stones bandmate and close friend Brian Jones. The two became a couple on a trip to Morocco that Jones had to abandon when he fell ill; the subsequent relationship between Richards and Pallenberg weighed heavily on Jones, and strained his relationship with the rest of the Rolling Stones.

Richards met his wife, model Patti Hansen, in 1979. They married on 18 December 1983, Richards’s 40th birthday, and have two daughters, Theodora Dupree and Alexandra Nicole, born in 1985 and 1986, respectively. In September 2014 Richards published a children’s book with Theodora, Gus and Me: The Story of My Granddad and My First Guitar. Theodora was reported as contributing pen and ink illustrations for the book, which was inspired by the man she was named after (Richards’s grandfather Theodore Augustus Dupree).

Richards still owns Redlands, the Sussex estate he purchased in 1966, as well as a home in Weston, Connecticut, and another in the private resort island of Parrot Cay, Turks & Caicos. His primary home is in Weston. In June 2013 Richards said that he would retire with his family to Parrot Cay or Jamaica if he knew his death was coming. However, in November 2016 he said “I’d like to croak magnificently, onstage.” Keith Richards has five grandchildren, three from his son Marlon and two from his daughter Angela.Richards is an avid reader with a strong interest in history, and owns an extensive library. An April 2010 article revealed that Richards yearns to be a librarian.

Richards is a keen fan of shepherd’s pie, a British traditional dish. Stuart Cable, the ex-drummer of Stereophonics, recollected that he was once confronted by Richards because he had served himself a piece of the shepherd’s pie meant for Richards. The dish was also mentioned by Richards in his autobiography, advising readers to add more onions after cooking the meat filling to enhance the pie’s flavour.

In 2011, Rolling Stone magazine referred to Richards as the creator of “rock’s greatest single body of riffs” on guitar, ranking him fourth on its list of the top 100 best guitarists. Rolling Stone also lists fourteen songs he co-wrote with Jagger on its “500 Greatest Songs of All Time” list.