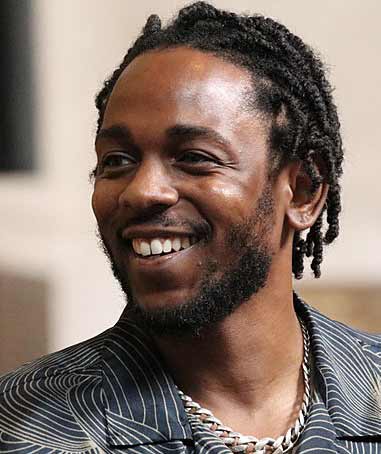 Kendrick Lamar Duckworth (born June 17, 1987) is an American rapper, songwriter, and record producer. Since his debut into the mainstream with Good Kid, M.A.A.D City (2012), Lamar has been regarded as one of the most influential artists of his generation, and one of the greatest rappers of all time. Aside from his solo career, he is also known as a member of the hip hop supergroup Black Hippy alongside his Top Dawg Entertainment (TDE) label-mates Ab-Soul, Jay Rock, and Schoolboy Q.

Raised in Compton, California, Lamar embarked on his musical career as a teenager under the stage name K-Dot, releasing a mixtape that garnered local attention and led to his signing with indie record label Top Dawg Entertainment. He began to gain recognition in 2010 after his first retail release, Overly Dedicated. The following year, he independently released his first studio album, Section.80, which included his debut single “HiiiPoWeR”. By that time, he had amassed a large online following and collaborated with several prominent hip hop artists, including The Game, Busta Rhymes, and Snoop Dogg.

Lamar’s major label debut album, Good Kid, M.A.A.D City, was released in 2012 to critical acclaim. It was later certified Platinum by the Recording Industry Association of America (RIAA). His third album To Pimp a Butterfly (2015) incorporated elements of funk, soul, jazz, and spoken word. It became his first number one album on the Billboard 200, and was the most acclaimed album of the 2010s. It was followed by Untitled Unmastered (2016), a collection of unreleased demos that originated during the recording sessions for To Pimp a Butterfly. He released his fourth album, Damn (2017) to further acclaim; its lead single “Humble” topped the US Billboard Hot 100, while the album became the first non-classical and non-jazz album to be awarded the Pulitzer Prize for Music.

Lamar has received many accolades over the course of his career, including 13 Grammy Awards, two American Music Awards, five Billboard Music Awards, a Brit Award, 11 MTV Video Music Awards, a Pulitzer Prize, and an Academy Award nomination. In 2012, MTV named him the Hottest MC in the Game on their annual list. Time named him one of the 100 most influential people in the world in 2016. In 2015, he received the California State Senate’s Generational Icon Award.

Kendrick Lamar Duckworth was born in Compton, California, on June 17, 1987, the son of a couple from Chicago. Although not in a gang himself, he grew up around gang members, with his closest friends being Piru Bloods and his father, Kenny Duckworth, being a Gangster Disciple. His first name was given to him by his mother in honor of American singer-songwriter Eddie Kendricks of The Temptations. He grew up on welfare and in section 8 housing. In 1995, at the age of eight, Lamar witnessed his idols Tupac Shakur and Dr. Dre filming the music video for their hit single “California Love”, which proved to be a significant moment in his life. As a child, Lamar attended McNair Elementary and Vanguard Learning Center in the Compton Unified School District. He has admitted to being quiet and shy in school, his mother even confirming he was a “loner” until the age of seven. As a teenager, he attended Centennial Middle School in Compton, where he was a straight-A student.

In 2004, at the age of 16, Lamar released his first full-length project, a mixtape titled Youngest Head Nigga in Charge (Hub City Threat: Minor of the Year), under the pseudonym K-Dot. The mixtape was released under Konkrete Jungle Muzik and garnered local recognition for Lamar. The mixtape led to Lamar securing a recording contract with Top Dawg Entertainment (TDE), a newly founded indie record label, based in Carson, California. He began recording material with the label and subsequently released a 26-track mixtape two years later, titled Training Day (2005).

Throughout 2006 and 2007, Lamar would appear alongside other up-and-coming West Coast rappers, such as Jay Rock and Ya Boy, as opening acts for veteran West Coast rapper The Game. Under the moniker K-Dot, Lamar was also featured on The Game’s songs “The Cypha” and “Cali Niggaz”.

In 2008, Lamar was prominently featured throughout the music video for Jay Rock’s commercial debut single, “All My Life (In the Ghetto)”, which features American hip hop superstar Lil Wayne and was backed by Warner Bros. Records. Lamar garnered further recognition after a video of a live performance of a Charles Hamilton show surfaced, in which Hamilton battled fellow rappers who were in the audience. Lamar began rapping a verse over the instrumental to Miilkbone’s “Keep It Real”, which would later appear on a track titled “West Coast Wu-Tang”.

After receiving a co-sign from Lil Wayne, Lamar released his third mixtape in 2009, titled C4, which was heavily themed around Wayne’s album Tha Carter III. Soon after, Lamar decided to drop K-Dot as his stage name and go by Kendrick Lamar. He subsequently released a self-titled extended play in late 2009. That same year, Lamar along with his TDE label-mates: Jay Rock, Ab-Soul and ScHoolboy Q formed Black Hippy, a hip hop supergroup.

In April 2015, Lamar became engaged to his high school girlfriend, beautician Whitney Alford. He is a cousin of NBA player Nick Young. He used to smoke weed, but has since quit.

Lamar is a devout Christian, having converted following the death of a friend. He has been outspoken about his faith in his music and interviews. He announced to the audience during Kanye West’s Yeezus Tour that he had been baptized in 2013. Lamar has credited God for his fame and his “deliverance” from crime that often plagued Compton in the 1990s. He also believes his career is divinely inspired and that he has a greater purpose to serve mankind, saying in an interview with Complex in 2014, “I got a greater purpose, God put something in my heart to get across and that’s what I’m going to focus on, using my voice as an instrument and doing what needs to be done.” The introductory lines to his 2012 album Good Kid, M.A.A.D City include a form of the Sinner’s Prayer. His song “i” discusses his Christian faith. He dressed up as Jesus for Halloween in 2014 and explained, “If I want to idolize somebody, I’m not going to do a scary monster, I’m not gonna do another artist or a human being—I’m gonna idolize the Master, who I feel is the Master, and try to walk in His light. It’s hard, it’s something I probably could never do, but I’m gonna try. Not just with the outfit but with everyday life. The outfit is just the imagery, but what’s inside me will display longer.” His 2017 album Damn has a recurring theme based around religion and struggle.

During the 2012 presidential election, Lamar stated, “I don’t vote. I don’t do no voting, I will keep it straight up real with you. I don’t believe in none of the shit that’s going on in the world.” He went on to say that voting was useless: “When I say the president can’t even control the world, then you definitely know there’s something else out there pushing the buttons. They could do whatever they want to do, we[‘re] all puppets.” Several days before the 2012 presidential election, he reversed his previous claim that he was not going to vote and said that he was voting for Barack Obama because Mitt Romney did not have a “good heart”. Lamar later met Obama in January 2016 in promotion of Obama’s My Brother’s Keeper Challenge. Speaking about the meeting, Lamar said, “We tend to forget that people who’ve attained a certain position are human.” Before the meeting, Obama said in an interview that his favorite song of 2015 was Lamar’s “How Much a Dollar Cost”.