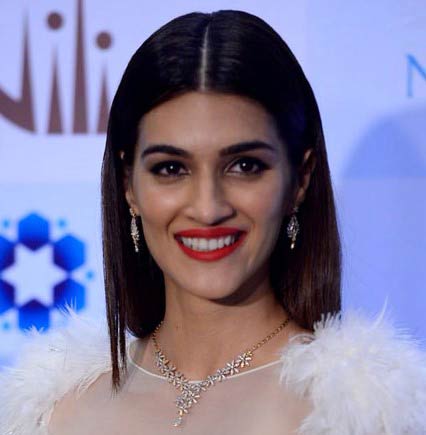 Kriti Sanon (born 27 July 1990) is an Indian actress who appears predominantly in Hindi films. She pursued an engineering degree from the Jaypee Institute of Information Technology, after which she briefly worked as a model. After making her debut in Telugu cinema with the psychological thriller 1: Nenokkadine (2014), Sanon won the Filmfare Award for Best Female Debut for her performance in Sabbir Khan’s action comedy Heropanti (2014), which marked her first Bollywood release.

Sanon has since starred in the commercially successful action comedy Dilwale (2015), which ranks as her highest-grossing release, the romantic comedies Bareilly Ki Barfi (2017) and Luka Chuppi (2019), and the comedy Housefull 4 (2019). She has also launched her own line of clothing and endorses several brands and products, and has appeared in Forbes India’s Celebrity 100 list of 2019.

Sanon was born on 27 July 1990 in New Delhi to Rahul Sanon, a chartered accountant and Geeta Sanon, a professor at the University of Delhi. Her family is Punjabi. She has a younger sister named Nupur Sanon. She attended Delhi Public School, RK Puram and later secured Bachelor of Technology degree in Electronics and Telecommunication Engineering from Jaypee Institute of Information Technology, Noida.

Sanon made her acting debut in 2014 with Sukumar’s Telugu film 1: Nenokkadine, a psychological thriller, in which she played the role of Sameera, a journalist who is also the love interest of Mahesh Babu’s character. The film received mixed reviews from critics. A reviewer for The Times of India wrote that Sanon “looks pretty” and “acts well”. while a reviewer for Sify.com stated that she “looks gorgeous” and considered her performance to be “okay” for a newcomer.

Sanon and Kartik Aaryan promoting Luka Chuppi in 2019
Later that year, Sanon made her Hindi cinema debut, opposite Tiger Shroff, in Sabbir Khan’s action romance Heropanti. Despite receiving mixed reviews from critics, it emerged as a commercial success. Taran Adarsh of Bollywood Hungama wrote that she “looks gorgeous and handles her part with certainty and confidence” and that she “has the trappings of a star”, whereas Rajeev Masand said she “looks lovely and makes an impression despite her harebrained role”. Conversely, Srijana Das of The Times of India criticised her emoting, calling it “more cheesy than sharp.” For her performance, Sanon won the Filmfare Award for Best Female Debut.

Sanon’s second Telugu film release came with Sudheer Varma’s Dohchay, a crime film co-starring Naga Chaitanya. She next appeared in Rohit Shetty’s action-comedy Dilwale, in which she starred alongside Varun Dhawan, Shah Rukh Khan and Kajol. The film received mixed reviews from critics, though emerged as one of the highest-grossing Indian films of all time, grossing more than ₹3.72 billion (US$52 million) worldwide. Anupama Chopra disliked the film and wrote that Sanon and Dhawan “work as bait, meant to bring in the critical youth segment”.

Sanon had two film releases in 2017. She first starred alongside Sushant Singh Rajput in Dinesh Vijan’s directorial debut Raabta, which tells the story of star-crossed lovers who are reincarnated. In a scathing review, Sukanya Verma of Rediff.com labelled the film “embarrassingly daft” but took note of Sanon’s “statuesque, spirited presence”. It did not do well commercially. Her next release, Ashwiny Iyer Tiwari’s romantic comedy Bareilly Ki Barfi, was better received. Sanon starred alongside Ayushmann Khurrana and Rajkummar Rao and played the role of a headstrong woman in rural India who aspires to a better life. Saibal Chatterjee of NDTV noted that “the burden of making Bareilly Ki Barfi work rests upon Kriti Sanon and she doesn’t put a foot wrong”, but Shubhra Gupta of The Indian Express thought that despite Sanon’s effort, her performance lacked naturalism. It earned over ₹548 million (US$7.7 million) against its ₹200 million (US$2.8 million) budget.

In 2019, Sanon starred opposite Kartik Aaryan in Luka Chuppi, a romantic comedy about a couple in a live-in relationship. Devesh Sharma of Filmfare wrote, “Sanon is spontaneous throughout and seems to be finding her feet in comedy, having a gala time of it all in the process.” Commercially, it proved to be a success. Her next two releases of the year were the comedies Arjun Patiala and Housefull 4. The latter emerged as a commercial success despite receiving unfavourable reviews. In her final film release of the year, Sanon portrayed Parvatibai opposite Arjun Kapoor’s Sadashivrao Bhau in Ashutosh Gowariker’s period drama Panipat, based on the Third Battle of Panipat.[40] It emerged as a box-office bomb.[41] That year, Sanon appeared in Forbes India’s Celebrity 100 list, ranking 38th with an estimated annual income of ₹80.9 million (US$1.1 million).

Sanon will next star as a surrogate mother in Laxman Utekar’s drama Mimi, and feature opposite Akshay Kumar in Bachchan Pandey, a remake of the Tamil action film Veeram (2014).