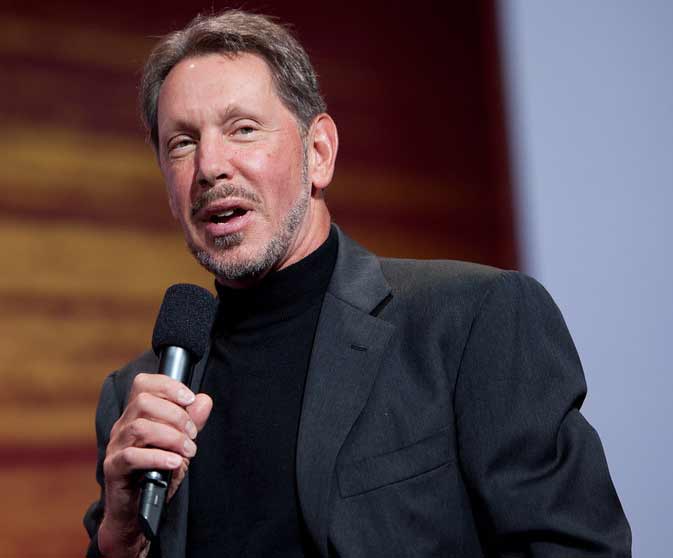 Lawrence Joseph Ellison (born August 17, 1944) is an American business magnate, investor, and philanthropist who is a co-founder and the executive chairman and chief technology officer (CTO) of Oracle Corporation. As of October 2019, he was listed by Forbes magazine as the fourth-wealthiest person in the United States and as the sixth-wealthiest in the world, with a fortune of $69.1 billion, increased from $54.5 billion in 2018.

Larry Ellison was born in New York City, to an unwed Jewish mother. His biological father was an Italian American United States Army Air Corps pilot. After Ellison contracted pneumonia at the age of nine months, his mother gave him to her aunt and uncle for adoption. He did not meet his biological mother again until he was 48.

Ellison moved to Chicago’s South Shore, then a middle-class neighborhood. He remembers his adoptive mother as warm and loving, in contrast to his austere, unsupportive, and often distant adoptive father, who had adopted the name Ellison to honor his point of entry into the United States, Ellis Island. Louis Ellison was a government employee who had made a small fortune in Chicago real estate, only to lose it during the Great Depression.

Although Ellison was raised in a Reform Jewish home by his adoptive parents, who attended synagogue regularly, he remained a religious skeptic. Ellison states: “While I think I am religious in one sense, the particular dogmas of Judaism are not dogmas I subscribe to. I don’t believe that they are real. They’re interesting stories. They’re interesting mythology, and I certainly respect people who believe these are literally true, but I don’t. I see no evidence for this stuff.” At age thirteen, Ellison refused to have a bar mitzvah celebration. Ellison says that his fondness for Israel is not connected to religious sentiments, but rather due to the innovative spirit of Israelis in the technology sector.

Ellison was admitted to University of Illinois at Urbana–Champaign and was enrolled as a premed student. At Illinois, he was named science student of the year but later withdrew after his sophomore year, without taking final exams, because his adoptive mother had just died. After spending the summer of 1966 in California, he then attended the University of Chicago for one term, where he first encountered computer design. In 1966, aged 22, he moved to Berkeley, California.

Ellison has been married and divorced four times:

Ellison made a brief cameo appearance in the 2010 movie Iron Man 2. In 2010, Ellison purchased a 50% share of the BNP Paribas Open tennis tournament. Ellison owns many exotic cars, including an Audi R8 and a McLaren F1. His favorite is the Acura NSX, which he was known to give as gifts each year during its production. Ellison is also reportedly the owner of a Lexus LFA.

In 2010, Ellison ended his ownership of the 12th largest yacht in the world, named Rising Sun. He sold his remaining shares in the yacht to music and film mogul David Geffen. Rising Sun is 453 feet (138 metres) long, and reportedly cost over $200 million to build. He downsized to Musashi, a 288-foot (88-metre) yacht built by Feadship.

BMW Oracle Racing was the “Challenger of Record” on behalf of the Golden Gate Yacht Club of San Francisco for the 2007 America’s Cup in Valencia, Spain, until eliminated from the 2007 Louis Vuitton Cup challenger-selection series in the semi-finals. On February 14, 2010, Ellison’s yacht USA 17 won the second race (in the best of three “deed of gift” series) of the 33rd America’s Cup, after winning the first race two days earlier. Securing a historic victory, Ellison and his BMW Oracle team became the first challengers to win a “deed of gift” match. The Cup returned to American shores for the first time since 1995. Ellison served as a crew member in the second race. Previously, Ellison had filed several legal challenges, through the Golden Gate Yacht Club, against the way that Ernesto Bertarelli (also one of the world’s richest men) proposed to organize the 33rd America’s Cup following the 2007 victory of Bertarelli’s team Alinghi. The races were finally held[clarification needed] in February 2010 in Valencia.

On September 25, 2013, Ellison’s Oracle Team USA defeated Emirates Team New Zealand to win the 34th America’s Cup in San Francisco Bay, California. Oracle Team USA had been penalized two points in the final for cheating by some team members during the America’s Cup World Series warm-up events.[59] The Oracle team came from a 1–8 deficit to win 9–8, in what has been called “one of the greatest comebacks in sports history”.

In 2019, Ellison, in conjunction with Russell Coutts, started the SailGP international racing series. The series used F50 foiling catamarans, the fastest class of boat in history with regattas held across the globe. Ellison committed to five years of funding to support the series until it could become self sustaining. The first season was successful with global audiences of over 1.8 billion.

Ellison is a licensed pilot who has owned several aircraft. He was cited by the city of San Jose, California, for violating its limits on late-night takeoffs and landings from San Jose Mineta International Airport by planes weighing more than 75,000 pounds (34,019 kg). In January 2000, Ellison sued over the interpretation of the airport rule, contending that his Gulfstream V aircraft “is certified by the manufacturer to fly at two weights: 75,000 pounds, and at 90,000 pounds for heavier loads or long flights requiring more fuel. But the pilot only lands the plane in San Jose when it weighs 75,000 pounds or less, and has the logs to prove it.” US District Judge Jeremy Fogel ruled in Ellison’s favor in June 2001, calling for a waiver for Ellison’s jet, but did not invalidate the curfew.

Ellison also owns at least two military jets: a SIAI-Marchetti S.211, a training aircraft designed in Italy, and a decommissioned MiG-29, which the US government has refused him permission to import.

Ellison styled his estimated $110 million Woodside, California, estate after feudal Japanese architecture, complete with a man-made 2.3-acre (0.93 ha) lake and an extensive seismic retrofit. In 2004 and 2005 he purchased more than 12 properties in Malibu, California, worth more than $180 million. The $65 million Ellison spent on five contiguous lots at Malibu’s Carbon Beach made this the most costly residential transaction in United States history until Ron Perelman sold his Palm Beach, Florida, compound for $70 million later that same year. His entertainment system cost $1 million, and includes a rock concert-sized video projector at one end of a drained swimming pool, using the gaping hole as a giant subwoofer.

In early 2010, Ellison purchased the Astor’s Beechwood Mansion – formerly the summer home of the Astor family – in Newport, Rhode Island, for $10.5 million.

In 2011 he purchased the 249-acre Porcupine Creek Estate and private golf course in Rancho Mirage, California, for $42.9 million. The property was formerly the home of Yellowstone Club founders Edra and Tim Blixseth, and was sold to Ellison by creditors following their divorce and bankruptcy.

On June 21, 2012, the governor of Hawaii, Neil Abercrombie, declared that Ellison had signed an agreement to buy most of the island of Lanai from the Castle & Cooke company, owned by David H. Murdock. Following the purchase Ellison owns 98% of Lanai, Hawaii’s sixth-largest island.

In 1992 Ellison shattered his elbow in a high-speed bicycle crash. After receiving treatment at University of California, Davis, Ellison donated $5 million to seed the Lawrence J. Ellison Musculo-Skeletal Research Center. In 1998, the Lawrence J. Ellison Ambulatory Care Center opened on the Sacramento campus of the UC Davis Medical Center.

To settle an insider trading lawsuit arising from his selling nearly $1 billion of Oracle stock, a court allowed Ellison to donate $100 million to his own charitable foundation without admitting wrongdoing. A California judge refused to allow Oracle to pay Ellison’s legal fees of $24 million. Ellison’s lawyer had argued that if Ellison were to pay the fees, that could be construed as an admission of guilt. His charitable donations to Stanford University raised questions about the independence of two Stanford professors who evaluated the case’s merits for Oracle. In response to the September 11 terrorist attacks of 2001, Ellison made a controversial offer to donate software to the federal government that would have enabled it to build and run a national identification database and to issue ID cards.

Forbes‘ 2004 list of charitable donations made by the wealthiest 400 Americans stated that Ellison had donated[when?] $151,092,103, about 1% of his estimated personal wealth. In June 2006, Ellison announced he would not honor his earlier pledge of $115 million to Harvard University, claiming it was due to the departure of former President Lawrence Summers. Oracle spokesman Bob Wynne announced, “It was really Larry Summers’ brainchild and once it looked like Larry Summers was leaving, Larry Ellison reconsidered … [I]t was Larry Ellison and Larry Summers that had initially come up with this notion.” In 2007 Ellison pledged $500,000 to fortify a community centre in Sderot, Israel, after discovering that the building was not fortified against rocket attacks. Other charitable donations by Ellison include a $10 million donation to the Friends of the Israel Defense Forces in 2014. In 2017 Ellison donated $16.6 million to the Friends of the Israel Defense Forces. His donation was intended to support the construction of well-being facilities on a new campus for co-ed conscripts.

In August 2010 a report listed Ellison as one of the 40 billionaires who had signed “The Giving Pledge”.

In May 2016 Ellison donated $200 million to the University of Southern California for establishing a cancer research center: the Lawrence J. Ellison Institute for Transformative Medicine of USC.

Ellison was critical of NSA whistle-blower Edward Snowden, saying that “Snowden had yet to identify a single person who had been ‘wrongly injured’ by the NSA’s data collection”. He has donated to both Democratic and Republican politicians, and in late 2014 hosted Republican Senator Rand Paul at a fundraiser at his home.

Ellison was one of the top donors to Conservative Solutions PAC, a super PAC supporting Marco Rubio’s 2016 presidential bid. As of February 2016, Ellison had given $4 million overall to the PAC. In 2020, Ellison hosted a fundraiser for Donald Trump at his Rancho Mirage estate.