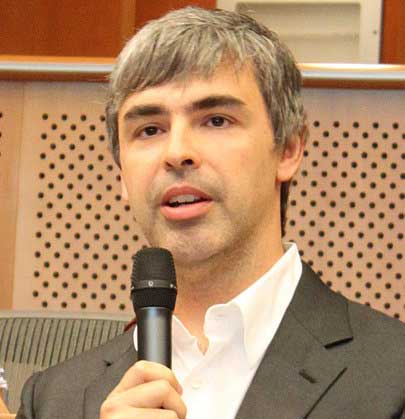 Lawrence Edward Page (born March 26, 1973) is an American computer scientist and Internet entrepreneur. He is best known as one of the co-founders of Google along with Sergey Brin.

Page was the chief executive officer of Google from 1998 until August 2001 (stepping down in favor of Eric Schmidt) then from April 2011 until July 2015 when he moved to become CEO of Alphabet Inc. (created to deliver “major advancements” as Google’s parent company) , a post he held until December 4, 2019. He remains an Alphabet board member, employee, and controlling shareholder.

Creating Google built a large amount of wealth. Forbes placed him 10th in the list “Billionaires 2019,” and as of July 2020, Page was the 13th-richest person in the world, with a net worth of $69.4 billion, according to Forbes.

Page is the co-inventor and namesake of PageRank, a search ranking algorithm for Google Page received the Marconi Prize in 2004 with co-writer Brin.

Page was born on March 26, 1973, in Lansing, Michigan. His mother is Jewish; his maternal grandfather later made aliyah to Israel. Page, however, has declared no formal religion. His father, Carl Victor Page Sr., earned a PhD in computer science from the University of Michigan. BBC reporter Will Smale described him as a “pioneer in computer science and artificial intelligence”. Page’s father was a computer science professor at Michigan State University and his mother Gloria was an instructor in computer programming at Lyman Briggs College at the same institution.

During an interview, Page recalled his childhood. Noting that his house “was usually a mess, with computers, science, and technology magazines and Popular Science magazines all over the place”, an environment in which he immersed himself. Page was an avid reader during his youth, writing in his 2013 Google founders letter: “I remember spending a huge amount of time pouring [sic] over books and magazines” . According to writer Nicholas Carlson, the combined influence of Page’s home atmosphere and his attentive parents “fostered creativity and invention”. Page also played instruments and studied music composition while growing up. His parent’s sent him to music summer camp — Interlochen Arts Camp at Interlochen, Michigan and Page has mentioned that his musical education inspired his impatience and obsession with speed in computing. “In some sense, I feel like music training led to the high-speed legacy of Google for me”. In an interview Page said that “In music, you’re very cognizant of time. Time is like the primary thing” and that “If you think about it from a music point of view, if you’re a percussionist, you hit something, it’s got to happen in milliseconds, fractions of a second”.

Page was first attracted to computers when he was six years old, as he was able to “play with the stuff lying around”—first-generation personal computers—that had been left by his mother and father. He became the “first kid in his elementary school to turn in an assignment from a word processor”. His older brother also taught him to take things apart and before long he was taking “everything in his house apart to see how it worked”. He said that “from a very early age, I also realized I wanted to invent things. So I became really interested in technology and business. Probably from when I was 12, I knew I was going to start a company eventually.”

Page attended the Okemos Montessori School (now called Montessori Radmoor) in Okemos, Michigan, from age 2-7 (1975 to 1979). He attended East Lansing High School graduating in 1991. In summer school, he attended Interlochen Center for the Arts playing flute but mainly saxophone for two summers. Page holds a Bachelor of Science in computer engineering from the University of Michigan, with honors and a Master of Science in computer science from Stanford University. While at the University of Michigan, Page created an inkjet printer made of Lego bricks (literally a line plotter), after he thought it possible to print large posters cheaply with the use of inkjet cartridges—Page reverse-engineered the ink cartridge, and built the electronics and mechanics to drive it. Page served as the president of the Beta Epsilon chapter of the Eta Kappa Nu fraternity, and was a member of the 1993 “Maize & Blue” University of Michigan Solar Car team. As an undergraduate at the University of Michigan, he proposed that the school replace its bus system with a personal rapid transit system, which is essentially a driverless monorail with separate cars for every passenger. He also developed a business plan for a company that would use software to build a music synthesizer during this time.

In 2007, Page married Lucinda Southworth on Necker Island, the Caribbean island owned by Richard Branson. Southworth is a research scientist and the sister of actress and model Carrie Southworth. Page and Southworth have two children, born in 2009 and 2011.

On February 18, 2005, Page bought a 9,000 square feet (840 m2) Spanish Colonial Revival architecture house in Palo Alto, California designed by American artistic polymath Pedro Joseph de Lemos, a former curator of the Stanford Art Museum and founder of the Carmel Art Institute, after the historic building had been on the market for years with an asking price of US$7.95 million. A two-story stucco archway spans the driveway and the home features intricate stucco work, as well as stone and tile in California Arts and Crafts movement style built to resemble de Lemos’s family’s castle in Spain. The hacienda was constructed between 1931 and 1941 by de Lemos. It is also on the National Register of Historic Places.

In 2009 Page began purchasing properties and tearing down homes adjacent to his home in Palo Alto to make room for a large ecohouse. The existing buildings were “deconstructed” and the materials donated for reuse. The ecohouse was designed to “minimize the impact on the environment.” Page worked with an arborist to replace some trees that were in poor health with others that used less water to maintain. Page also applied for Green Point Certification, with points given for use of recycled and low or no-VOC (volatile organic compound) materials and for a roof garden with solar panels. The house’s exterior features zinc cladding and plenty of windows, including a wall of sliding-glass doors in the rear. It includes eco-friendly elements such as permeable paving in the parking court and a pervious path through the trees on the property. The 6,000-square-foot (560m²) house also observes other green home design features such as organic architecture building materials and low volatile organic compound paint.

In 2011, Page bought the $45-million 193-foot (59m) superyacht ‘Senses’. ‘Senses’ has extensive ocean exploration capabilities, the superyacht was created to explore the world’s oceans in comfort and it carries a comprehensive inventory of equipment for that purpose. ‘Senses’ was built by Fr. Schweers Shipyard in (Germany) at their Berne shipyard. ‘Senses’ features a displacement steel hull and a steel/aluminium superstructure, with teak decks. ‘Senses’ is equipped with a stabilization system which reduces the free surface effect and results in a smoother cruising experience underway.[108]

Page announced on his Google+ profile in May 2013 that his right vocal cord is paralyzed from a cold that he contracted the previous summer, while his left cord was paralyzed in 1999.[109] Page explained that he has been suffering from a vocal cord issue for 14 years, and, as of his May 2013 post, doctors were unable to identify the exact cause. The Google+ post also revealed that Page had donated a considerable sum of money to a vocal-cord nerve-function research program at the Voice Health Institute in Boston, US. The program, at Massachusetts General Hospital, is led by Steven Zeitels, the Eugene B. Casey Professor of Laryngeal Surgery. An anonymous source stated that the donation exceeded $20 million.

In October 2013, Business Insider reported that Page’s paralyzed vocal cords are caused by an autoimmune disease called Hashimoto’s thyroiditis, and prevented him from undertaking Google quarterly earnings conference calls for an indefinite period.

In November 2014, Page’s family foundation, the Carl Victor Page Memorial Fund, reportedly holding assets in excess of a billion dollars at the end of 2013, gave $15 million to aid the effort against the Ebola virus epidemic in West Africa. Page wrote on his Google+ page that “My wife and I just donated $15 million … Our hearts go out to everyone affected.”