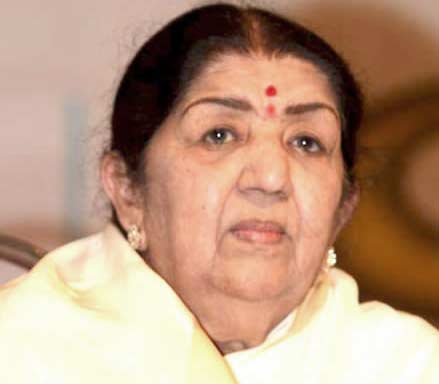 Lata Mangeshkar (About this soundpronunciation (help·info) (born 28 September 1929)) is an Indian playback singer and music director. She is one of the best-known and most respected playback singers in India. She has recorded songs in over a thousand Hindi films and has sung songs in over thirty-six regional Indian languages and foreign languages, though primarily in Marathi, Hindi, Bengali and Assamese.

The Dadasaheb Phalke Award was bestowed on her in 1989 by the Government of India. In 2001, in recognition of her contributions to the nation, she was awarded the Bharat Ratna, India’s highest civilian honour and is only the second vocalist, after M. S. Subbulakshmi, to receive this honour. France conferred on her its highest civilian award (Officer of the Legion of Honour) in 2007.

She has four siblings—Meena Khadikar, Asha Bhosle, Usha Mangeshkar, and Hridaynath Mangeshkar—of whom she is the eldest.

Lata Mangeshkar was born in 1929, the eldest daughter of Pandit Deenanath Mangeshkar, a Marathi and Konkani musician and his wife Shevanti in Indore (in present-day Madhya Pradesh and then the capital of the princely state of Indore which was part of the Central India Agency in British India). Her father, Pandit Deenanath Mangeshkar, was a classical singer and theatre actor. Her mother, Shevanti (later renamed Shudhamati), a Gujarati woman from Thalner, Bombay Presidency (now in northwest Maharashtra), was Deenanath’s second wife; his first wife Narmada, who had died, was Shevanti’s older sister.

Lata’s paternal grandfather, Ganesh Bhatt Navathe Hardikar (Abhisheki), was a Karhade Brahmin priest who performed the abhishekam of the Shiva lingam at the Mangueshi Temple in Goa, and her paternal grandmother, Yesubai Rane, belonged to the Gomantak Maratha Samaj community of Goa.

The family’s last name used to be Hardikar; Deenanath changed it to Mangeshkar in order to identify his family with his native town, Mangeshi in Goa. Lata was named “Hema” at her birth. Her parents later renamed her Lata after a female character, Latika, in one of her father’s plays, BhaawBandhan.

Lata is the eldest child of the family. Meena, Asha, Usha, and Hridaynath, in birth order, are her siblings, all accomplished singers and musicians.

Lata received her first music lesson from her father. At the age of five, she started to work as an actress in her father’s musical plays (Sangeet Natak in Marathi). On the first day in school,. that she left school because they would not allow her to bring Asha with her, as she would often bring her younger sister with her.

In 2009, Mangeshkar was awarded the title of Officer of the French Legion of Honour, France’s highest order.

In 2012, Mangeshkar was ranked number 10 in Outlook India’s poll of the Greatest Indian.

Mangeshkar is also a recipient of honorary doctorates from the Sangeet Natak Akademi in 1989, Indira Kala Sangeet Vishwavidyalaya, Khairagarh, and Shivaji University in Kolhapur.

In 1974, The Guinness Book of Records listed Lata Mangeshkar as the most recorded artist in history, stating that she had reportedly recorded “not less than 25,000 solo, duet and chorus backed songs in 20 Indian languages” between 1948 and 1974. Her record was contested by Mohammad Rafi, who was claimed to have sung around 28,000 songs. After Rafi’s death, in its 1984 edition, the Guinness Book of World Records stated Lata Mangeshkar’s name for the “Most Recordings”, but also stated Rafi’s claim. The later editions of Guinness Book stated that Lata Mangeshkar had sung no fewer than 30,000 songs between 1948 and 1987.

The entry was discontinued by Guinness editions in 1991 without explanation, while several sources continued to claim that she recorded thousands of songs, with estimates ranging up to figures as large as 50,000. However, even the earliest Guinness claim of 25,000 songs (between 1948–1974) was disputed and claimed to have been exaggerated by several others, stating that the number of songs sung by Lata Mangeshkar in Hindi films till 1991 was found to be 5025. Mangeshkar herself has stated that she does not keep a record of the number of songs recorded by her, and that she did not know from where Guinness Book editors got their information. In 2011, the entry was revived by Guinness crediting the record to her sister Asha Bhosle as the most recorded artist in music history, “for recording up to 11,000 solo, duet and chorus-backed songs and in over 20 Indian languages since 1947”. Since 2016, current record in this category belongs to Pulapaka Susheela, for recording at least 17,695 songs in 6 languages, not counting some lost early recordings.