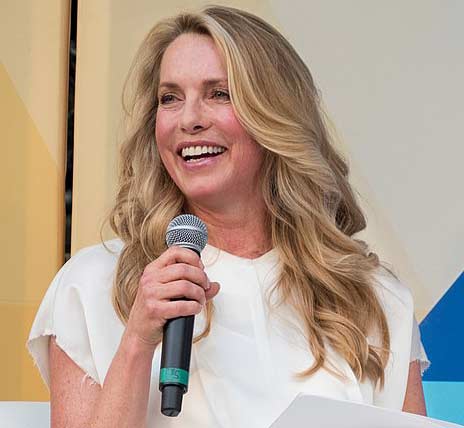 Laurene Powell Jobs (born November 6, 1963) is an American businesswoman, executive and the founder of Emerson Collective, an organization that, among other investing and philanthropic activities, advocates for policies concerning education reform, social redistribution and environmental conservation. She is also co-founder and president of the board of College Track, which prepares disadvantaged high school students for college. Powell Jobs resides in Palo Alto, California, with her three children. She is the widow and heir of Steve Jobs, co-founder and former CEO of Apple Inc. She manages the Laurene Powell Jobs Trust.

In October 1989, Steve Jobs gave a “View from the Top” lecture at Stanford Business School. Laurene Powell was a new MBA student and sneaked to the front of the lecture and started up a conversation with Jobs, who was seated next to her. They ended up having dinner together that night. A year and a half later on March 18, 1991, they married in a ceremony at the Ahwahnee Hotel in Yosemite National Park. Presiding over the wedding was Kōbun Chino Otogawa, a Zen Buddhist monk. Their son, Reed, was born September 1991, followed by daughters Erin in 1995 and Eve in 1998. Laurene is also the stepmother of Lisa Brennan-Jobs, Steve’s daughter from a previous relationship, who was born in 1978.

Powell Jobs co-founded Terravera, a natural foods company that sold to retailers throughout Northern California. She also served on the board of directors of Achieva, which created online tools to help students study more effectively at standardized testing. Before business school, Powell Jobs worked for Merrill Lynch Asset Management and spent three years at Goldman Sachs as a fixed-income trading strategist.

On October 5, 2011, at the age of 56, Steve Jobs, the CEO of Apple, died due to complications from a relapse of his previously treated islet-cell neuroendocrine pancreatic cancer. Powell Jobs inherited the Steven P. Jobs Trust, which as of May 2013 had a 7.3% stake in The Walt Disney Company worth approximately $11.1 billion, and 38.5 million shares of Apple Inc.

As of July 2020, Powell Jobs and her family are ranked 59th in the Forbes’ annual list of the world’s billionaires. and 22nd in Forbes 400. According to the same list, she is the richest woman in the technology industry.