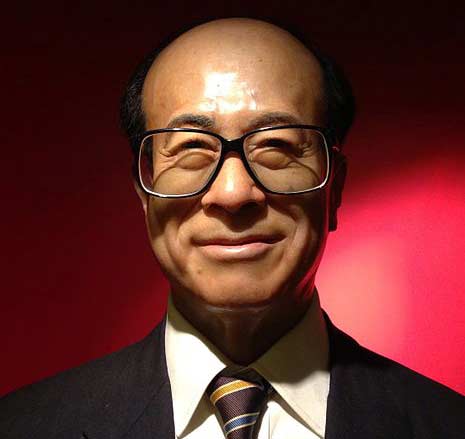 Sir Li Ka-shing GBM KBE JP (born 13 June 1928) is a Hong Kong business magnate, investor, and philanthropist. As of June 2019, Li is the 30th richest person in the world, with an estimated net wealth of US$29.4 billion. He is the senior advisor for CK Hutchison Holdings and CK Asset Holdings, after he retired from the Chairman of the Board in May 2018; through it, he is the world’s leading port investor, developer, and operator of the largest health and beauty retailer in Asia and Europe.

Li was one of the most influential entrepreneurs in Asia, presiding over a business empire with a diverse portfolio of businesses from a wide array of industries, including transportation, real estate, financial services, retail, and energy and utilities. His conglomerate company Cheung Kong Holdings was influential in many sectors of the Hong Kong economy and made up 4% of the aggregate market capitalisation of the Hong Kong Stock Exchange. Forbes Magazine and the Forbes family honoured Li Ka-shing with the first ever Malcolm S. Forbes Lifetime Achievement Award on 5 September 2006, in Singapore. In spite of his wealth, Li cultivated a reputation for leading a frugal no-frills lifestyle, and was known to wear simple black dress shoes and an inexpensive Seiko wristwatch. He lived in the same house for decades, in what has now become one of the most expensive districts in Hong Kong, Deep Water Bay in Hong Kong Island. Li is also regarded as one of Asia’s most generous philanthropists, donating billions of dollars to charity and other various philanthropic causes, and owning the second largest private foundation in the world after Bill & Melinda Gates Foundation. Li was often referred to as “Superman Li” in Hong Kong because of his business prowess.

Li was born in Chao’an, Chaozhou in Guangdong Province in 1928 to Teochew parents. Owing to his father’s death, he was forced to leave school before the age of 15 and found a job in a plastics trading company where he worked 16 hours a day. In 1950 he started his own company, Cheung Kong Industries. From manufacturing plastics, Li developed his company into a leading real estate investment company in Hong Kong that was listed on the Hong Kong Stock Exchange in 1972. Cheung Kong expanded by acquiring Hutchison Whampoa and Hongkong Electric Holdings Limited in 1979 and 1985 respectively.

His two sons, Victor Li and Richard Li, are also prominent figures in the Hong Kong business scene. Victor Li succeeded his father as Chairman of CK Hutchison Holdings and Chairman of CK Asset Holdings Limited, while Richard Li is Chairman of PCCW, the largest telecom company in Hong Kong. They are both Canadian citizens. He has a granddaughter Michelle Sarah Li Se De, who studied at the Chinese International School in Hong Kong. He is a follower of Buddhism.

Li is famously plainly dressed for a Hong Kong tycoon. In the 1990s he wore a $50 HKD timepiece from Citizen Watch Co. and plain ties. He later wore a Seiko. In 2016, he wore a $500 HKD Citizen watch.

His son Victor Li was kidnapped in 1996 on his way home after work by gangster “Big Spender” Cheung Tze-keung. Li Ka-shing paid a ransom of HK$1 billion, directly to Cheung who had come to his house. A report was never filed with Hong Kong police. Instead the case was pursued by Mainland authorities, leading to Cheung’s execution in 1998, an outcome not possible under Hong Kong law. Rumours circulated of a deal between Li and the Mainland. In interviews, when this rumor was brought up, Li brushed it off and dismissed it completely.

For many years, he was considered to be a top pro-Beijing figure. However, in recent years, tensions have been growing between Li and the mainland, especially with the rise of current China’s paramount leader Xi Jinping. During the 2019–20 Hong Kong protests, he refused to outright condemn the protesters, instead urging for peace and calling on the authorities to respond to the protesters humanely.

On 4 August 2011 at the interim results announcement for Hutchison Whampoa, Li endorsed Henry Tang for the forthcoming chief executive election. Then Li said “You all can be just like me, one-person-one-vote (一人一票).” The media then looked at Li in disbelief, and pointed out that regular citizens do not get one-person-one-vote. Li then tried to laugh it off and said “maybe in 2017 they will have one-person-one-vote to choose the chief executive, I probably just said it a little early.” Li was, however, criticised by Xinhua for not being unambiguous in his opposition to the Umbrella movement protests and his support for Leung. Later, prior to the Legco vote, Li said that the largest threat to Hong Kong’s future was if the government failed to ensure passage of the 2014–5 round of political reform.

Li’s business empire has presence around the world, including China. Li came under attack from Global Times in early 2015, when his companies put out word that it was considering selling prime Shanghai and Beijing properties. It became apparent that Li aimed at re-weighting his asset portfolio to more stable and transparent markets in the West. Concerted attacks ensued and went into a crescendo as China’s economy slowed down dramatically in the second half of the year, and the central government sought a way to stem the capital outflows. Specific reproaches were that his asset disposals were “an act of ingratitude” and “immoral at such a sensitive juncture”. Security Times, a People’s Daily publication, estimated that Li has sold at least 73.8 billion yuan worth of assets since 2014. Li’s holding companies denied divesting in China, saying that its asset disposals were being undertaken in the ordinary course of business. The attacks stopped abruptly several weeks later, when editorials in official publications such as People’s Daily, Beijing Youth Daily took a neutral stance in unison.