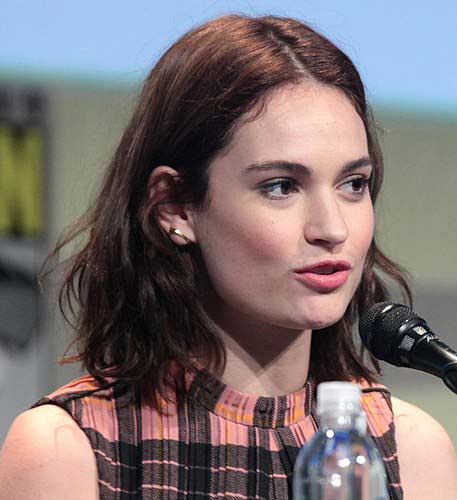 Lily Chloe Ninette Thomson (born 5 April 1989), known professionally as Lily James, is an English actress. She studied acting at the Guildhall School of Music and Drama in London and began her acting career in the British television series Just William (2010). Following her supporting role in the period drama series Downton Abbey (2012–2015), she had her film breakthrough as the title role in the fantasy film Cinderella (2015).

Lily James was born on 5 April 1989 in Esher, Surrey, the daughter of Ninette Mantle, an actress, and James “Jamie” Thomson, a musician. She has two brothers, one older and one younger. Her paternal grandmother, Helen Horton, was an American actress. She attended Tring Park School for the Performing Arts and subsequently went on to study acting at the Guildhall School of Music and Drama in London, graduating in 2010. Shortly thereafter, she signed with Tavistock Wood management in London.

Her television credits include Ethel Brown in the 2010 BBC production of Richmal Crompton’s Just William, Poppy in the fourth series of ITV’s Secret Diary of a Call Girl (2011), and the rebellious Lady Rose in Downton Abbey. Lady Rose later became a main character in the fourth and fifth series of the programme. James also appeared as Lady Rose in the series finale.

In 2011, James played Taylor at the Young Vic Theatre in Tanya Ronder’s stage adaptation of the novel Vernon God Little directed by Rufus Norris, Nina in Russell Bolam’s modern adaptation of The Seagull at Southwark Playhouse, and Desdemona in Daniel Evans’ production of Othello at the Crucible Theatre, Sheffield, alongside Dominic West and Clarke Peters.

In 2012, James played the role of Katrina in Play House and Marijka in Definitely the Bahamas in a double-bill written and directed by Martin Crimp at the Orange Tree Theatre in Richmond, London as part of the theatre’s fortieth anniversary. Charles Spencer of The Telegraph wrote that “it is performed with a persuasive mixture of mischief and deeper feeling by Obi Abili and Lily James, the latter combining a mixture of neuroticism and glowing sexual allure that proves extraordinarily potent.” James played the role of Korrina in the Warner Brothers film Wrath of the Titans and starred in Fast Girls, written by Noel Clarke, centred around a group of young female athletes competing in the World Championships.

James played the titular character in the 2015 live-action Disney film Cinderella. James was photographed by Annie Leibovitz as Cinderella, in the blue gown her character wears to the ball, for the December 2014 issue of Vogue. James also made her singing debut in the film singing “Sing Sweet Nightingale,” “Lavender’s Blue” and “A Dream Is a Wish Your Heart Makes” from the 1950 animated film in the end credits.

In 2016, she returned to television in the 2016 BBC historical drama series War & Peace, playing the character of Natasha Rostova. She also starred in her second major film, playing the role of Elizabeth Bennet in the action-horror film Pride and Prejudice and Zombies, a parody of Jane Austen’s Pride and Prejudice. It received mixed reviews and failed to break even at the box office. James played the role of Juliet in the Garrick Theatre’s production of Romeo and Juliet directed by Rob Ashford and actor-director Kenneth Branagh in 2016.

In 2017, she appeared in several major films. She played Debora, the love interest of the main character, Baby, in the action film Baby Driver. She played Elizabeth Layton, a secretary to PM Winston Churchill, in the war drama film Darkest Hour. She headlined the World War II drama film The Exception, playing a British agent posing as a servant to the exiled Kaiser Wilhelm II.

James starred as the younger version of Meryl Streep’s character, Donna Sheridan, in the sequel to Mamma Mia!, titled Mamma Mia! Here We Go Again. The film was released in July 2018. The same year, James played author Juliet Ashton in the 1940s period drama The Guernsey Literary and Potato Peel Pie Society who exchanges letters with the residents of Guernsey, an island off the coast of Normandy that was German-occupied during World War II.

In November 2018, James was cast as the second Mrs. de Winter in a new adaptation of Daphne du Maurier’s Gothic romance Rebecca. It will be directed by Ben Wheatley and co-star Armie Hammer.

James’ father, James Thomson, died from cancer in 2008. She took her father’s given name as her stage name when she learned there was already an actress named Lily Thomson.

She has been in a relationship with actor Matt Smith since 2014.