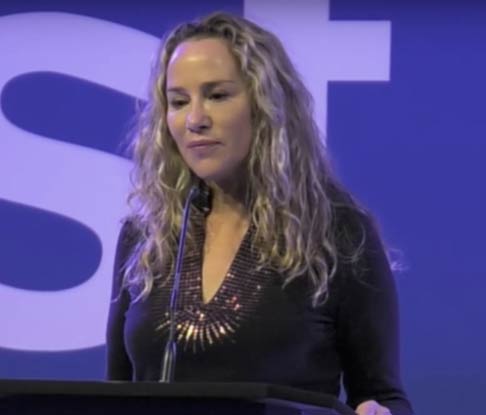 Lisa Kristine (born September 2, 1965) is an American humanitarian photographer, activist, and speaker. Her photography career has documented indigenous cultures and social causes, such as modern slavery, in more than 100 countries. Through her work, Kristine has supported numerous charities and humanitarian organizations. She has published six books and has been the subject of four documentaries.

Kristine is the recipient of the 2013 Lucie Humanitarian Award at Carnegie Hall.

In 2017, Kristine founded Human Thread Foundation to promote human dignity through educating the public and driving awareness about social causes.

Kristine began learning photography at age 11 and began traveling internationally in the early 1980s. She has visited countries on six continents and is focused on topics related to human rights and, in particular, modern slavery. Lisa is known to spend months connecting with her subjects by traveling with a translator to ensure the subjects’ permission before documenting them on film.

In 2009, she collaborated with Free the Slaves on a body of work about human enslavement, published as Slavery (2010).

Kristine was the recipient of the 2013 Lucie Humanitarian Award. She has given a TED talk and has also written for the Atlantic. In 2015, Resource Magazine recognized her as one of the 12 top tier portrait photographers. In 2016, she gave the keynote at the Thomson Reuters Trust Conference and she gave the keynote at Thomson Reuters 2017 Anti-Slavery Summit in Hong Kong. Her work has been endorsed by Archbishop Desmond Tutu, the Queen Mother of Bhutan, and Amnesty International.

Kristine’s speaking was described as “most gripping…I’ve ever seen in a presentation” by Carmine Gallo in his book, Talk like TED:The 9 Public Speaking Secrets of The World’s Top Minds. When the State of the World Forum convened in San Francisco in 1999, Kristine presented her work to help inspire discussions on human rights, social change, and global security. Her work was auctioned by Christie’s New York and sponsored by the United Nations to benefit Kofi Annan’s Ambassador’s Ball. In 2016 the National Underground Railroad Freedom Center received an award for best exhibit from the Ohio Museums Association, in showing Kristine’s Enslaved exhibition. Kristine was the sole exhibitor at the 2009 Vancouver Peace Summit.

Lisa has also been interviewed by CNN and her work on slavery has been featured in three films released in 2014. One of these films, Sold, directed by Academy Award-winner Jeffrey D. Brown and Emma Thompson includes a character inspired by Kristine and is portrayed by Gillian Anderson. In 2017, Kristine published her sixth book, entitled Bound to Freedom: Slavery to Liberation.

In 2017, Kristine founded Human Thread Foundation to promote human dignity through educating the public and driving awareness about social causes.

Sir Richard Branson commented on Lisa’s book release of Bound to Freedom saying, “These images take us behind the veil to the atrocities of slavery.” Her photographs have appeared in several publications, books, and multimedia platforms. Lisa’s photographic exhibitions have been shown worldwide. According to David Clark, Former Head of Photography, Tate Modern, “Lisa Kristine’s images are a testament to truth and an insightful and inspiring body of evidence which should never and can never be denied.” For the Vatican in 2016, Lisa Kristine and Frank Fitzpatrick produced the video, Prayer for Freedom to bring about awareness and compassion for those enslaved.