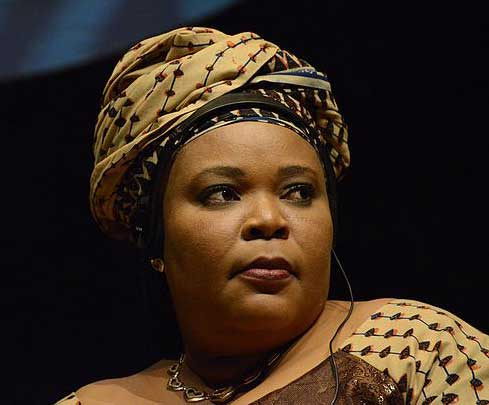 Known for: Women of Liberia Mass Action for Peace and Pray the Devil Back to Hell

Leymah Roberta Gbowee (born 1 February 1972) is a Liberian peace activist responsible for leading a women’s nonviolent peace movement, Women of Liberia Mass Action for Peace that helped bring an end to the Second Liberian Civil War in 2003. Her efforts to end the war, along with her collaborator Ellen Johnson Sirleaf, helped usher in a period of peace and enabled a free election in 2005 that Sirleaf won. She, along with Ellen Johnson Sirleaf and Tawakkul Karman, were awarded the 2011 Nobel Peace Prize “for their non-violent struggle for the safety of women and for women’s rights to full participation in peace-building work.”

Leymah Gbowee was born in central Liberia on 1 February 1972. At the age of 17, she was living with her parents and two of her three sisters in Monrovia, when the First Liberian Civil War erupted in 1989, throwing the country into chaos until 1996. “As the war subsided she learned about a program run by UNICEF,… training people to be social workers who would then counsel those traumatized by war,” wrote Gbowee in her 2011 memoir, Mighty Be Our Powers. She did a three-month training, which led her to be aware of her own abuse at the hands of the father of her two young children, son Joshua “Nuku” and daughter Amber. Searching for peace and sustenance for her family, Gbowee followed her partner, called Daniel in her memoir, to Ghana where she and her growing family (her second son, Arthur, was born) lived as virtually homeless refugees and almost starved. She fled with her three children, riding a bus on credit for over a week “because I didn’t have a cent,” back to the chaos of Liberia, where her parents and other family members still lived.

In 1998, in an effort to gain admission to an associate of arts degree program in social work at Mother Patern College of Health Sciences. Gbowee became a volunteer within a program of the Lutheran Church in Liberia operating out of St. Peter’s Lutheran Church in Monrovia, where her mother was a women’s leader and Gbowee had passed her teenage years. It was called the Trauma Healing and Reconciliation Program (THRP), and it marked the beginning of Gbowee’s journey toward being a peace activist:

The THRP’s offices were new, but the program had a history. Liberia’s churches had been active in peace efforts ever since the civil war started, and in 1991, Lutheran pastors, lay leaders, teachers and health workers joined with the Christian Health Association of Liberia to try to repair the psychic and social damage left by the war. She studied and worked her way toward her associate of art degree, conferred in 2001, while applying her training in trauma healing and reconciliation to try to rehabilitate some of the ex-child soldiers of Charles Taylor’s army. Surrounded by the images of war, she realized that “if any changes were to be made in society it had to be by the mothers”. Gbowee gave birth to a second daughter Nicole “Pudu”, making her the mother of four, as she engaged in the next chapter of her life’s journey – rallying the women of Liberia to stop the violence that was destroying their children.

Gbowee obtained an Associate of Arts degree in social work (2001) from Mother Patern College of Health Sciences in Monrovia, Liberia, and subsequently graduated with a Master of Arts in Conflict Transformation (2007) from Eastern Mennonite University in Harrisonburg, Virginia. She also received a certificat in Conflict Prevention and Peacebuilding Training from the United Nations Institute for Training, the Healing Victims of War Trauma Center in Cameroon, and Non-Violent Peace Education in Liberia

Gbowee is the founder and president of Gbowee Peace Foundation Africa, founded in 2012 and based in Monrovia, which provides educational and leadership opportunities to girls, women and the youth in Liberia.

In addition, Gbowee is the former executive director of the Women Peace and Security Network Africa, based in Accra, Ghana, which builds relationships across the West African sub-region in support of women’s capacity to prevent, avert, and end conflicts. She is a founding member and former coordinator of the Women in Peacebuilding Program/West African Network for Peacebuilding (WIPNET/WANEP). She also served as the commissioner-designate for the Liberia Truth and Reconciliation Commission. For the 2013–2015 academic years, she is a Distinguished Fellow in Social Justice at Barnard College of Columbia University. In 2013, she became an Oxfam Global Ambassador.

Gbowee speaks internationally to advance women’s rights, and peace and security. In 2016, Gbowee spoke at a protest march organized by Women Wage Peace, a political grassroots group working to advance a peace agreement between Israel and Palestine.

Gbowee is also an outspoken supporter of fellow Liberian Ebenezer Norman’s non-profit organization A New Dimension of Hope, a foundation which builds schools in Liberia. In May 2015, she wrote personal letters to the contributors of NDhope’s crowd-funding campaign on Indiegogo and has spoken at their events.

As of April 2017, Gbowee is also Executive Director of the Women of Peace and Security Program at AC4, Earth Institute, Columbia University.

Gbowee is also a contributor at The Daily Beast.

Gbowee’s exposure to the New York philanthropic social set, facilitated by Disney (who had become a close friend), opened the door for a series of awards. The first, from the John F. Kennedy School of Government at Harvard, came in early 2006, and then they began to arrive in accelerated fashion: recognition by Women’s eNews, the Gruber Prize for Women’s Rights, the John F. Kennedy Profile in Courage Award, the Living Legends Award for Service to Humanity, and several more. In July 2011, EMU announced that Gbowee had been named its “Alumna of the Year”. (Gbowee’s eldest son, Joshua “Nuku” Mensah, entered EMU as a freshman in 2010, overlapping by one year with Sam Gbaydee Doe’s eldest daughter, Samfee Doe, then a senior.) The crowning honor came in October 2011 when the Norwegian Nobel Committee made Gbowee one of three female recipients of the 2011 Nobel Peace Prize.

From left to right:Tawakkul Karman, Leymah Gbowee, and Ellen Johnson Sirleaf display their awards during the presentation of the Nobel Peace Prize, 10 December 2011.