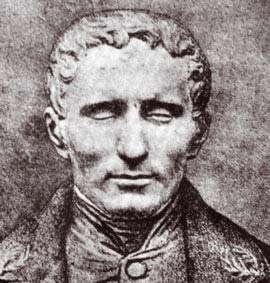 Louis Braille (4 January 1809 – 6 January 1852) was a French educator and inventor of a system of reading and writing for use by the blind or visually impaired. His system remains virtually unchanged to this day, and is known worldwide simply as braille.

Blinded in both eyes as a result of an early childhood accident, Louis Braille mastered his disability while still a boy. He excelled in his education and received a scholarship to France’s Royal Institute for Blind Youth. While still a student there, he began developing a system of tactile code that could allow blind people to read and write quickly and efficiently. Inspired by the military cryptography of Charles Barbier, Braille constructed a new method built specifically for the needs of the blind. He presented his work to his peers for the first time in 1824.

In adulthood, Louis Braille served as a professor at the Institute and had an avocation as a musician, but he largely spent the remainder of his life refining and extending his system. It went unused by most educators for many years after his death, but posterity has recognized braille as a revolutionary invention, and it has been adapted for use in languages worldwide.

Louis Braille was born in Coupvray, a small town about twenty miles east of Paris, on 4 January 1809. He and his three elder siblings – Monique Catherine (b. 1793), Louis-Simon (b. 1795), and Marie Céline (b. 1797) – lived with their parents, Simon-René and Monique, on three hectares of land and vineyards in the countryside. Simon-René maintained a successful enterprise as a leatherer and maker of horse tack.

As soon as he could walk, Braille spent time playing in his father’s workshop. At the age of three, the child was playing with some of the tools, trying to make holes in a piece of leather with an awl. Squinting closely at the surface, he pressed down hard to drive the point in, and the awl glanced across the tough leather and stabbed him in one of his eyes. A local physician bound and patched the affected eye and even arranged for Braille to be met the next day in Paris by a surgeon, but no treatment could save the damaged organ. In agony, the young boy suffered for weeks as the wound became severely infected. He eventually lost sight in the other eye, likely due to sympathetic ophthalmia.

Louis Braille survived the torment of the infection but by the age of five he was completely blind in both eyes. Due to his young age, Braille did not realize at first that he had lost his sight, and often asked why it was always dark. His parents made many efforts – quite uncommon for the era – to raise their youngest child in a normal fashion, and he prospered in their care. He learned to navigate the village and country paths with canes his father hewed for him, and he grew up seemingly at peace with his disability. Braille’s bright and creative mind impressed the local teachers and priests, and he was accommodated with higher education.

Braille studied in Coupvray until the age of ten. Because of his combination of intelligence and diligence, Braille was permitted to attend one of the first schools for blind children in the world, the Royal Institute for Blind Youth, since renamed to the National Institute for Blind Youth in Paris. Braille, the last of the family’s children to leave the household, departed for the school in February 1819. At that time the Royal Institute was an underfunded, ramshackle affair, but it provided a relatively stable environment for blind children to learn and associate together.

The children were taught how to read by a system devised by the school’s founder, Valentin Haüy. Not blind himself, Haüy was a philanthropist who devoted his life to helping the blind. He designed and manufactured a small library of books for the children using a technique of embossing heavy paper with the raised imprints of Latin letters. Readers would trace their fingers over the text, comprehending slowly but in a traditional fashion which Haüy could appreciate.

Braille was helped by the Haüy books, but he also despaired over their lack of depth: the amount of information kept in such books was necessarily small. Because the raised letters were made in a complex artisanal process using wet paper pressed against copper wire, the children could not hope to “write” by themselves. So that the young Louis could send letters back home, Simon-René provided him with an alphabet made from bits of thick leather. It was a slow and cumbersome process, but the boy could at least trace the letters’ outlines and write his first sentences.

The handcrafted Haüy books all came in uncomfortable sizes and weights for children. They were laboriously constructed, very fragile, and expensive to obtain: when Haüy’s school first opened, it had a total of three books. Nonetheless, Haüy promoted their use with zeal. To him, the books presented a system which would be readily approved by educators and indeed they seemed – to the sighted – to offer the best achievable results. Braille and his schoolmates, however, could detect all too well the books’ crushing limitations. Nonetheless, Haüy’s efforts still provided a breakthrough achievement – the recognition of the sense of touch as a workable strategy for sightless reading. The Haüy system’s main drawback was that it was “talking to the fingers with the language of the eye”.

Braille read the Haüy books repeatedly, and he was equally attentive to the oral instruction offered by the school. He proved to be a highly proficient student and, after he had exhausted the school’s curriculum, he was immediately asked to remain as a teacher’s aide. By 1833, he was elevated to a full professorship. For much of the rest of his life, Braille stayed at the Institute where he taught history, geometry, and algebra.

Braille’s ear for music enabled him to become an accomplished cellist and organist in classes taught by Jean-Nicolas Marrigues. Later in life, his musical talents led him to play the organ for churches all over France. A devout Catholic, Braille held the position of organist in Paris at the Church of Saint-Nicolas-des-Champs from 1834 to 1839, and later at the Church of Saint-Vincent-de-Paul.