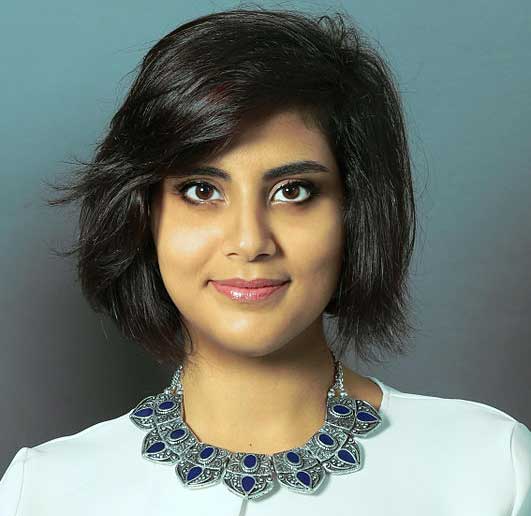 Loujain al-Hathloul (Arabic: لجين الهذلول‎ Lujjayn al-Hadhlūl; born 31 July 1989) is a Saudi women’s rights activist, a social media figure, and a political prisoner. She is a graduate of the University of British Columbia. Al-Hathloul has been arrested and released on several occasions for defying the ban on women driving in Saudi Arabia and was arrested in May 2018, with several prominent women’s rights activists, on the charge of “attempting to destabilise the kingdom” after being effectively kidnapped in the United Arab Emirates. As of October 2018, her husband, Saudi stand-up comedian Fahad Albutairi, had also been forcefully returned from Jordan to the Kingdom and was under arrest.

Al-Hathloul is known both for her role in the women to drive movement and in opposing the Saudi male guardianship system. On 1 December 2014, she was arrested and detained for 73 days after an attempt to cross the border in her car from the United Arab Emirates (UAE) to Saudi Arabia on charges related to defying the female driving ban in the kingdom. She has a UAE licence but the Saudi police still arrested her. Al-Hathloul attempted to stand in Saudi local elections in December 2015, the first vote in Saudi Arabia to include women, but was barred.

In September 2016, along with 14,000 others, al-Hathloul signed a petition to King Salman asking for the male guardianship system to be abolished. On 4 June 2017, she was arrested and detained at King Fahad International Airport in Dammam. The reason for the arrest was not officially disclosed, although Amnesty International believed it was for her human rights activism, and al-Hathloul was not allowed access to a lawyer or any contact with her family.

Loujain Al-Hathloul was kidnapped from UAE in March 2018 and deported to Saudi Arabia where she was arrested for a few days then put under a travel ban. Al-Hathloul was detained again on the eve of 15 May 2018, along with Eman al-Nafjan, Aisha al-Mana, Aziza al-Yousef, Madeha al-Ajroush and some men involved in campaigning for women’s rights in Saudi Arabia. Human Rights Watch interpreted the purpose of the arrests as frightening “anyone expressing skepticism about the crown prince’s rights agenda”.

In June 2018, women were granted the right to drive in Saudi Arabia, while al-Hathloul remained under arrest. According to ALQST and Amnesty International, al-Hathloul and several of the other women detained for their women’s rights activities were tortured. Torture techniques included being beaten on their feet, given electric shocks, whipped, in a torture location called “the hotel” or “the officer’s guesthouse”. According to Loujain al-Hathloul’s sister Alia, (who lives in Brussels, Belgium), torture techniques used specifically against Loujain also included beating, electric shocks and waterboarding, and the torture occurred between May and August 2018. Loujain al-Hathloul’s parents stated that Loujain’s “thighs were blackened by bruises” when they visited, and that Loujain “was shaking uncontrollably, unable to hold her grip, to walk or sit normally” during their visit. According to Alia al-Hathloul, Saud al-Qahtani visited al-Hathloul during her torture, laughing at her, threatening to rape and kill her and to dispose of her body in the sewage system, and he tortured her “all night during Ramadan”. Alia al-Hathloul stated that she had expected that under Saudi norms in relation to women, her sister would not have been tortured.

As of December 2018, al-Hathloul was in jail with her fellow activists at Dhahban Central Prison. According to her brother Walid al-Hathloul (who lives in Ontario, Canada), al-Hathloul was by February 2019 held in al-Ha’ir Prison.

On 1 March 2019, the office of Saudi Arabia’s public prosecutor announced that the preliminary investigation had been completed and they would be preparing to try al-Hathloul and other activists in court for undermining state security. On 13 March 2019, the trial began, although the charges were not specified and reporters and diplomats were barred from attending. In April 2019, a hearing on her case was postponed without a reason being given.

As of May 2020, her trial has been indefinitely postponed because of the coronavirus pandemic, which has raised concerns over her health inside the Saudi prison.